Botswana is a dry country with an annual average rainfall of 400 millimeters (15.7 inches). Lack of surface water in most parts of the country means that wells are required to cover domestic and industrial water needs. Currently, there are more than 10,000 water wells in operation, covering the needs of rural communities and agriculture and including 29 major wellfields.

Many wells show a marked and continuous decline in yield from inception. In 2001, the government of Botswana through the Department of Water Affairs (DWA) started to investigate the causes of well deterioration and identify and test appropriate technologies to improve the maintenance of borehole infrastucture.

Historically, the declined yield was attributed to corrosion and scaling, caused by unfavorable chemical characteristics of groundwater. Corrosion is so severe in some wells that pumping equipment and rising mains have to be regularly replaced, often at intervals of less than 12 months.

Avoiding the ‘slime’
The “sliming” or biofilm growth of wells is another major concern. Because aquifers aren’t sterile, they often contain a rich and diverse microbial flora,1 as is the case in Botswana. Waterborne bacteria rapidly attach themselves to the surface. Red slime found on pumps and discharge lines is an indication of iron-reducing bacteria, while black slime — mainly observed in deeper boreholes with stagnant water below the deepest inflow zone — indicates sulfate-reducing bacteria.

Many methods for successful treatment of wells affected by bacteriological growth have been documented, such as treatment with hydrochloric acid or other strong chemicals. These methods necessitate using chemicals, however, which are hazardous to the semi-skilled staff involved at the DWA.

To minimize these problems, the DWA along with a company developing electrolytically active water (EAW) treatment technology (see Principles of EAW Technology) initiated a water well rehabilitation program using anolyte. Anolyte, a super-oxidant solution, has proven to be at least as effective as hypochlorite, and completely safe and non-polluting.

Well problems in Botswana
The significance of microbial fouling on well and pump equipment deterioration has been described in various studies.1 Investigations by the DWA have revealed the presence of iron and sulfate related bacteria in nearly all affected wells.

Groundwater in Botswana occurs mainly in sedimentary aquifers and is restricted to semi-confined conditions and some basement aquifers. Wellfields most affected by yield and corrosion problems are within sedimentary environments. Explosive bacteriological growth is likely caused by widespread organic layers such as coal — containing organic carbon as the prime source of energy — and allowing microorganisms to flourish within the porous structures of the aquifer. With time, the flow conditions within the system deteriorate. It’s not yet understood why a sudden burst of biofilm growth affects the well and pumping gear. It’s believed that short pumping intervals, typical for most wells in Botswana, play an important role.

In non-sedimentary basement aquifers, nutrient flow within fractures is probably influenced by weathered layers containing important by-products such as iron or manganese. Semi- to unconfined flow conditions within the fracture system permit continuous oxygen inflow and buildup of biofilm.

In Botswana, biofilm — caused by microorganisms — is now acknowledged as the main cause of well performance problems. As it develops within the screen section, biofilm grabs silt, clay and mineral particles, which originate from shale layers typical of many sedimentary aquifers in Botswana. They move with the groundwater flow into the well. Some by-products associated with bacterial growth, such as oxidized iron and manganese, also accumulate. Finally, the well and often the pump components are blocked by a thick biofilm while mineral mass obstructs the groundwater flow from the aquifer into the well. 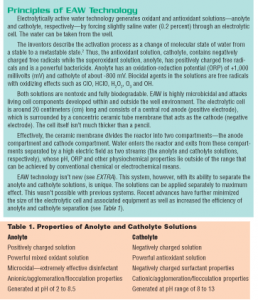 Three factors
In Botswana, the problems are exacerbated by three unique circumstances:

The full complexity of the interactions of the hydrogeological environment borehole design, and pumping schedules on bacterial activity in wells isn’t yet fully understood and needs further investigation.

Many boreholes in Botswana are remote and difficult to access with equipment and material. A mobile device was designed, which allows production of anolyte at the site itself. This eliminates the need to transport large volumes of fluids, and the mobile device uses the in situ well water to produce the anolyte. The mobile device is capable of producing 5,000 liters (L) of anolyte in a 20-hour cycle. The device ensures that anolyte is available in large quantities. Production costs are minimal and generously introduced anolyte guarantees more effective cleaning and deeper penetration of the aquifer. 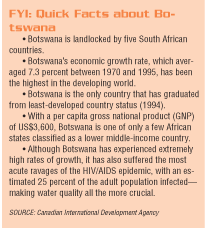 The test treatments with anolyte were carried out only on boreholes that had experienced considerable decline in yields. Biofouling was identified using a downhole camera and microscopic tests, followed by visual inspection of pumps and discharge lines to confirm the presence of iron or sulfate biofilms on pumps and pump intakes. Wells most affected were selected for rehabilitation with the EAW technology. The method that has proven to be most effective for heavily clogged boreholes in Botswana is explained this way.

Anolyte advantages
First, undiluted anolyte is introduced in large volumes to displace the water in the bore and the gravel pack. The anolyte kills the bacteria that are suspended in the water or attached to the borehole walls, and screens and softens the encrustations and hardened bacterial plugs in the gravelpack and aquifer (see Figure 1). 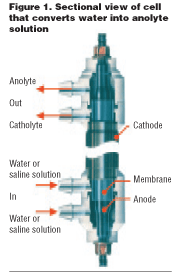 Then, after an exposure time of approximately 60 minutes, the wells are mechanically bailed using a surge block attached to the cable tool rig, starting at the top of the screen and progressively working down. The motion of the tool forces the anolyte through the gravel-pack into the aquifer. This process normally lasts three to four hours. The efficacy of the anolyte solution is tested at regular intervals with additional anolyte added as required. Afterwards, sediment and loosened biofilm are cleaned out with a mechanical bailer. Finally, the pump is reconnected with water pumped from the well until clear. The well is then reconnected to the system.

A quantity of 1,000 to 2,000 L anolyte was sufficient to efficiently clean most boreholes, which were between 100 and 250 meters (m) deep and had an 8-to-10 inch internal diameter. Larger volumes might be necessary for deeper boreholes or if the aquifer is heavily biofouled. In one case, 4,000 L had to be introduced.

Results of treatment
In all treated wells, the removed bioload was extremely high, an excellent indicator for method efficiency. Due to a biokill efficiency, which is far superior to that of most chemicals used for well rehabilitation, the EAW treatment was extremely effective in removing biofilm and softening hardened plugging layers with a considerable improvement in well performance in all tested boreholes. Yield increases of between 30 and 300 percent were achieved and post-treatment specific capacities were significantly greater than the pretreatment specific capacities, increasing from 40 to 300 percent.

Although testing the EAW treatment process in well rehabilitation is still in its initial investigation stages, it’s proving to be an exciting and effective treatment method for Botswana. Some advantages are:

With further refinements to the treatment process, EAW treatment should prove to be effective in rehabilitating not only water wells but also biofouled aquifers. This method is therefore of potential interest for all drilling contractors with interest in the restoration of boreholes.

Conclusion
Electrolytically activated water technology, using anolyte — a super-oxidant solution — for biofilm disinfection and destruction, was originally developed for medical applications. Human safety trials have recently been completed in Botswana, which have proven anolyte completely nontoxic and totally safe for use with humans. This level of safety cannot be achieved with existing chemicals and other electrochemical technologies used in water well rehabilitation. The rehabilitation crew required no protective clothing or masks for handling and storage of anolyte.

Editor’s note: The above article is reprinted from Water Well Journal’s August 2002 issue with permission of the National Ground Water Association. Any request for republication, in whole or part, should be directed to the association.

About the authors
Dr. T. Riekel is a hydrogeologist and was acting head of the Drilling Section of the Department of Water Affairs in Gaborone, Botswana, from 1999 to 2001. He is now advisor to the section and responsible for a countrywide water well rehabilitation project. He has 30 years experience in the water well industry and worked in water supply projects all over Africa. He can be reached at triekel@gov.bw.

Dr. G. Hinze is a veterinary surgeon and director of Active Solutions (Pty.) Ltd., of Gaborone, Botswana, the company developing the EAW technology in Botswana in the fields of food hygiene, human medicine, agriculture and water well technology.