The Importance of Water Quality to the Food Industry

Water is used throughout the food production chain from the farm to processing to the kitchen table and is often a direct ingredient in food and beverages. Thus, the quality of water can have significant impact on the quality and taste of food products. Although some food service operations use point-of-use (POU) water treatment devices to better ensure a safe and consistent product, many simply use municipal water and assume it has been adequately monitored, analyzed and determined safe for human consumption. Tap water supplies are known to vary with regard to taste, odor and the presence of microbes. Food and waterborne outbreaks have been documented worldwide and are evidence that current safety measures need to be improved. The food industry is global with products imported and exported daily. The global nature of the food industry further complicates control efforts since countries vary in their standards and practices.

Food & waterborne outbreaks
Each year, seven million people are estimated to become ill in the United States, and more than 1,000 die from disease-causing microbes in drinking water.1 Likewise, foodborne diseases cause approximately 76 million illnesses, 325,000 hospitalizations and 5,000 deaths in the United States each year.2 This number has increased in the past decade due in part to better reporting, globalization of food supply, introduction of new pathogens in new areas, the development of new virulence factors by microbes (physiological characteristics affecting their pathogenicity, such as the ability to produce toxins), population changes, immunity decreases, and changes in agricultural practices such as the reuse of wastewater for irrigation or manure for fertilizers.3 The list of 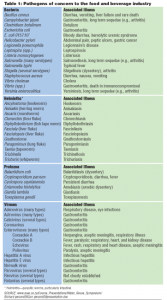 pathogens of concern in the food industry is long and includes bacteria, protozoa and viruses (see Table 1). Not surprising is that many foodborne pathogens may also be waterborne pathogens, but little is known about the cross-relationship between these two exposure routes. In other words, what level of foodborne disease could be eliminated by improved water quality?

Consider the outbreaks of Cyclospora from Guatemalan raspberries in the United States and Canada in 1996, 1997 and 1998, due to poor water quality and sanitary conditions in the plant. There was the 1998 Shigella outbreak affecting three U.S. states and two Canadian provinces due to parsley from Mexico contaminated by an unchlorinated municipal water supply used to chill and ice the produce. These outbreaks and others are directly linked to water used in food processing and storage.

Today, we recognize that microbial pathogens are capable of causing much more than diarrhea, including cancer, arthritis, respiratory illnesses, diabetes, hepatitis, heart, liver or kidney disease, autoimmune diseases and others. In addition, the growing population of immunocompromised people is a great concern since they’re more susceptible to microbial infections and more likely to experience severe symptoms of disease.

Questions on municipal water
Thanks to chlorine disinfection, the waterborne plagues of the past — such as cholera and typhoid fever — are no longer a widespread problem in developed nations. Outbreaks of waterborne disease, however, still occur and are primarily due to the use of untreated or inadequately treated drinking water supplies or recontamination in the distribution system. Although treatment methods of filtration and disinfection are effective at eliminating most waterborne pathogens, these systems are an inexact science, evidenced by the frequent prevalence of viral and protozoan pathogens in finished waters.4,5 Therefore, treatment plant reliability is a major concern.

New pathogens continue to emerge that appear to be even more resistant to conventional treatment processes, i.e., microsporidium (see www.cdc.gov/ncidod/dpd/parasites/microsporidia or http://sfwater.org/detail.cfm/C_ID/676#microsporidium). Even if municipal treatment processes were 100 percent effective, the tap water distribution system is grossly compromised and needs significant and continual repair. According to the Centers for Disease Control and Prevention (CDC), between 1997-1998, more than 70 percent of documented drinking water outbreaks were blamed on municipalities with 29.4 percent due to contamination in the distribution system and 41.2 percent due to a treatment deficiency.

Impact of water quality
Although the variability of the finished water product and minor changes in water treatment processes, i.e., periodic increased disinfectant use, could greatly affect the consistency of food or beverage products, the impact of water quality on food begins long before the tap. Sub-quality irrigation waters are a major concern with regard to microbial contamination of pre-harvest produce. Studies have shown that microbes from irrigation waters can become embedded in hidden crevices of produce and may persist after washing or irradiation treatment. Damaged surfaces of produce or packaging allow microbes to enter the food undetected. In addition, evidence is surfacing regarding the ability of some produce to absorb pathogens into their internal tissues through the root system.6

Foods of animal origin are the most common vehicle of foodborne disease, but what role does water have on the farm where animals are raised? Research has shown that E. coli O157:H7 is spread between animals via contaminated drinking water given to cattle. Clean water is thus important to prevent the spread of disease between animals and the subsequent spread to humans consuming meat or dairy products.

Many more potential points of contamination due to water exist in the process of growing, harvesting, packing, processing, shipping, preparation and consumption of food. Other areas of concern include aquaculture and seafood harvesting waters, wash water, personal hygiene and handling of food, ice used for storage and transport, utensil and surface cleaning, reconstitution, etc.

Control measures
In 1997, President Clinton announced a National Food Safety Initiative, recognizing the importance of risk assessment in achieving food safety goals. In order to minimize risks of microbial pathogens, a comprehensive farm-to-table approach was initiated. The United States has many agencies with programs in place for monitoring, regulating and controlling foodborne disease including the Department of Health and Human Services, the Food and Drug Administration (FDA), the U.S. Department of Agriculture (USDA) Food Safety and Inspection Service, the Animal and Plant Health Inspection Service, the U.S. Environmental Protection Agency (USEPA), and many others that assist regulatory authorities.

Whereas many food processes are inherently detrimental to pathogenic microbes — such as pasteurization, heating, acidifying, sterilizing, drying, irradiating, freezing, frying, etc. — foods are often consumed following exposure to water or food handlers without additional processing. In the food industry, the Hazard Analysis and Critical Control Point (HACCP) system7 is used as a systematic approach to identify and assess the control of hazards during production, processing, manufacturing, preparation and use of food water or other substances to ensure they’re safe for consumption or use. Initially created for the food industry, HACCP is being applied to a number of different processes including drinking water treatment, particularly bottled water applications.

The multi-barrier approach is highly effective for water treatment, where a series of treatment options are in place to remove a variety of contaminants and where any one treatment alone would be inadequate overall. POU devices are an essential end barrier for the additional purification of tap water supplies and have proven to significantly reduce the risk of waterborne disease from tap water. For example, Dr. Pierre Payment found that gastrointestinal illness could be reduced by as much as 50 percent by drinking reverse osmosis treated tap water compared to drinking tap water alone.8 Although a number of food and beverage suppliers have their own monitoring procedures and POU treatment devices in place, there’s a distinct call for communication between the food and water industries where a sharing of technology and treatment needs promises to have a positive impact on public health.

Food industry and tap water
The FDA’s Food Code states that drinking water shall be obtained from an approved source, such as a public water system or a nonpublic water system that’s constructed, maintained and operated according to law. While water quality is monitored by municipalities and required to conform to the National Primary Drinking Water Standards set by the USEPA, contamination post-treatment is a primary concern whether due to breaks in the distribution system, re-growth of microbes, or deliberate acts of terrorism. For many food suppliers, the prevalent attitude is that the water must be safe if it’s from a municipal water supply that’s treated and monitored.

A recent article in Dairy, Food and Environmental Sanitation9 raised some questions: “Is the ingredient, water, monitored and analyzed with the same care as other ingredients [in food]?” and “What standards, if any, are being used in food processing outside the U.S.?” In order to discuss these questions and other related issues, the Water Safety and Quality Professional Development Group was formed in June at the meeting of the International Association for Food Protection in San Diego. The mission of the group is to provide a forum to discuss items as to the role safety and quality of water plays in the global farm-to-table chain and develop program topics and symposia for presentation at IAFP’s annual meetings (see www.foodprotection.org).

Conclusion
A symposium on emerging issues in water quality has been proposed for the 2003 meeting of the IAFP, Aug. 10-13, in New Orleans. This meeting promises to be an excellent venue for the water treatment industry to get involved in the vast and broad water quality needs of the food industry.