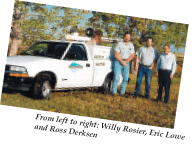 There’s a hundred years of history and a hundred before that All gathered in the thinkin’ Goin’ on beneath this hat. The cold flame burns within him ’Til his skin’s as cold as ice And the dues he paid to get here Are worth every sacrifice.

— “Cowboy Is His Name,” Baxter Black

Ross Derksen likes to describe himself as a true Westerner — a man with an independent spirit. 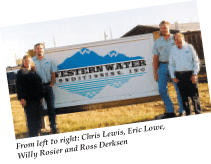 As owner and president of Western Water Conditioning in Gillette, Wyo., for more than 30 years, Derksen made the decision three years ago to take his business independent. Though he does deal with water purification and conditioning equipment manufacturers, he won’t do so on a traditional dealership franchise basis.

“I used to be an EcoWater dealer here, but I didn’t like all the exclusivity restrictions that big manufacturers demand,” said Derksen, who’s earned the Water Quality Association designation as a Certified Water Specialist, Level V (CWS-V). “But I’m a bit independent, so I just couldn’t swallow it. There were a thousand details to work out — a new logo for the business, new signage for the trucks. But once you make the decision, you have to deal with it.”

Humble, but paid for
Despite the change, the northeast Wyoming resident managed to cultivate a profitable business, pulling in an average of $300,000 a 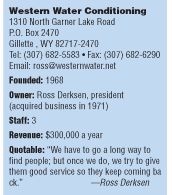 year. That’s been enough not only to support him and his wife, Nancy, but also employ two assistants, Eric Lowe and Willy Rosier, and a part-time bookkeeper, Chris Lewis, who he hopes to offer full-time work soon.

Derksen said he likes the reputation he’s earned over the years, which is based on doing what he can to help clients get the products or services they need even if they don’t have the available cash to pay for it.

“We pretty much do our own financing with lease-to-own programs,” he said. “We have to borrow some money to make that fly because it’s capital-intensive. There’s a lot of good income in this community, so some people will just pay cash or 90 days interest free.”

With the aid of his staff, Derksen assembles most of his own equipment. He does, however, deal in Autotrol instrumentation and control products by Osmonics Inc., including water treatment valves, controls and flow measurement components. Though he’s no longer an authorized dealer for EcoWater, Derksen is an authorized service provider for EcoWater products, most of which he sold when affiliated with the company.

“We’re consistent and we plug away and we service what we sell,” he said. “We’ve seen flashier people come and go, but after 30 years we’re still here. Our current surroundings are humble, but they’re paid for.”

Wide open spaces
As a result of going independent, Derksen was able to lower his prices to a clientele that can stretch a hundred miles in any direction from Gillette.

Wyoming is the nation’s least populated state with less than half a million people. Derksen’s corner of the state — a mere stone’s throw from Devil’s Tower National Monument, figuratively speaking — has less than 100,000 full-time residents, he said.

“We pretty much stock what we need for repair parts and we carry on our trucks most of what we need so that we can solve a problem on one call,” he said. “Since we’re running a radius of a hundred miles, the less back-tracking you have to do the better it is. Sometimes that costs us, but we do what we have to do.”

Despite the relatively low population, a few interlopers have entered the market, including a local Sears store and an office supply shop. There’s also a local Culligan dealer that employs nearly a dozen people.

Competitive advantages
Derksen tries to make up for that competition with his service and willingness to travel so far in any direction. In rural, often remote areas where neighborliness takes on an expanded definition uninhibited by distance, that’s an important asset.

That’s why the crux of his business centers on service rather than sales. All rental and sales business includes at least some servicing, something the less-pricey competitors don’t do.

As an independent, Derksen is able to price his water softeners, for example, at $1,200 to $1,350 including installation. If he had stayed with a franchise, that cost likely would be closer to $1,600, which makes it harder to sell clients on the equipment they need, he said. 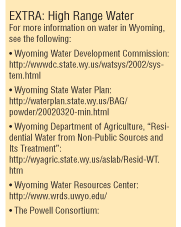 “It’s just a little easier to sell at a lower cost; but, of course, if people are real price shoppers, they’ll end up at Sears,” Derksen said. “They sell cheap and service high. But if you’re in it as a professional, you can’t possibly survive at those prices. We manage to appeal to enough people who will pay for local service, local knowledge and local parts.”

Though Derksen sometimes loses business to more price-conscious buyers, ultimately he gets them back.

“We’re still here because we made the extra effort to take care of all our customers,” he said. “We haven’t kept them all happy, I can tell you that. But what I hear elsewhere, not everybody else is either and I pick up business from people who have tried Sears or another competitor.”

Small town roots
Derksen generally has a small town background. He actually grew up in Huron, S.D., on the other side of the state roughly midway between Sioux Falls and Pierre, the state capital. He started studying for the ministry at Trinity Evangelical Divinity School in Rockford, IL, but left and worked there selling insurance for a few years with Travelers Insurance. He moved to Gillette at the behest of his brother, Ron, who ran the local Lindsey dealership. Ron had worked for Rapid City Soft Water, a Lindsey dealership a little way across the state line in South Dakota and came to Gillette to run the then-local subsidiary — later taking it over as a separate Lindsey dealership in 1971. Derksen took it over from him. The original name of the business was Lindsey Soft Water.

Familiar faces
In nearby Casper, WY, a two-hour drive away, former fellow EcoWater dealer David Bernardis said he understands all too well the woes Derksen faces, not only with regional water quality issues, but also in attitudes about “big-city” dealers.

Twenty years ago, Derksen and Bernardis’ father, Gus, were Lindsey dealers in their respective towns long before that company decided to change its name to EcoWater.

“It was the biggest mistake they ever made,” Bernardis said. “Lindsey was a well-known name, but the company wanted us all to change our names to Eco and we said, ‘So what will you want to change it to next week?’ That’s when we went independent, too.”

After David Bernardis took over Bernardis Water Treatment from his father, he and Derksen dealt with each other on a regular basis for a time when the two were involved in a now-defunct Wyoming water quality association.

Bound by bedrock
Because of the local geology, Wyoming has some unique problems not only with heavy metals in the groundwater, but also with methane getting into well supplies, in part, from coal-bed methane drilling.

Coal-bed methane drilling has increased in Wyoming and Colorado tenfold in the past decade and as a result has created serious problems with well water supplies, Bernardis said.

Water quality in the region will vary. While some areas have relatively good water, places like Gillette and Casper don’t, primarily because of the coal mining, he said.

Though such methane problems can be rectified for individual customers, the solution is neither easy nor cheap, he said; “What they have to do is build a ventilation system to let the methane dissipate.”

Hardness in the water can vary from one grain to more than 50 — ”but usually we don’t see much over 100″ — and such acid gases as hydrogen sulfide can be a major problem for clients and their corroded pipes.

“With hydrogen sulfide we deal with it with filtration, but we also like to use air injection and then filtration to take care of it,” said Derksen, who acquired the business in 1971.

Conclusion
Despite the water quality issues and smaller market, he said he never considered for a minute leaving the business.

“It’s interesting work and you get to see a new problem everyday or at least visit with new people,” he said. “I probably would make a poor employee, so I kind of have to work for myself. I have a bit of an independent, stubborn spirit and I kind of like to do things my way. This allows me to do that.”

As for retirement plans for the 59-year-old, “my idea of retirement is to work a 40-hour week so that’s probably what I’ll do at 65, cut my time back,” he said. “But I don’t feel in any particular urgency. I’m in good health right now.”

About the author
Charles Ashby is a freelance writer in Denver.