Using Ozone in the Prevention of Bacterial Biofilm Formation and Scaling

Summary: Bacterial biofilms are a common phenomenon of nature. These clusters of individual bacterium frequently inhabit both inert and living surfaces in a non-pathological manner; however, biofilms are known to be very detrimental in several water treatment applications. The pool and spa industry is certainly no exception.

This article is designed to introduce concepts behind the use of non-dissolved ozone gas against biofilm formation within swimming pools and spas. Additionally, a fundamental introduction into biofilm formation has been included. This detailed description will assist in understanding the arduous task of biofilm prevention. Therefore, the article will begin with an introduction into biofilms and how they apply to pools and spas. Next, it will discuss use of non-dissolved ozone in relation to biofilms.

Bacterial biofilms
In technical terms, bacterial biofilms are highly interactive, ubiquitous bacterial ecosystems consisting of individual bacterium bound to a foreign surface by a complex matrix of extracellular polysaccharides. They can be thought of as “bacterial cities.” Within these cities live groups of bacteria constituting multiple species. Individual bacterium coalesce by linking extracellular polysaccharides on their cell walls.

The polysaccharides equate to dense glue that’s quite cohesive. They form an interconnected matrix of fibers that attach to a multitude of surfaces, hence the ubiquitous nature. These extracellular polysaccharides have additional functions that will be discussed later. At the microscopic level, a bacterial biofilm looks similar to a coral reef (see Figure 1).

Formation and location
Bacterial biofilms can be found in environments ranging from the human mouth to computer chips. For the purposes of this article, the focus will be limited to where they’re found in relation to pools and spas. In theory, a bacterial biofilm can form on a multitude of surfaces in the presence of water. More specifically, bacterial biofilms have the potential to form on inert surfaces that come in contact with circulating water. Additionally, stagnant water is instrumental in exacerbating biofilm formation. 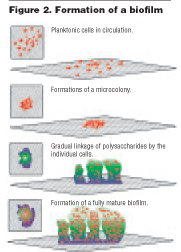 Biofilm formation begins with planktonic (individual) bacterial cells adhering to some type of foreign surface. This initial adhesion of single cells evolves into what has become known as a microcolony (see Figures 2 & 3). Microcolonies are relatively small groups of bacteria that eventually become the biofilms—some visible to the naked eye. The polysaccharides from individual cells gradually weave and interconnect, thus strengthening surface attachment as well as meshing all the planktonic cells together into larger structures.

Polysaccharide chains exhibit chemical properties that make them polar, and thus very “sticky.” This polarity is what leads to surface adhesion and cell cohesion. This is one of the properties that makes biofilms tough to remove. In terms of functionality, polysaccharides do more than glue everything together. Polysaccharides also shape the infrastructure of a biofilm. In fact, the advance science of transmission electron microscopy has confirmed that the majority of a typical biofilm’s matrix constitutes polysaccharides. This also has been confirmed through the investigative process of ruthenium red staining. These complex sugars can be thought of as a “skeleton.”

Polysaccharides form channels that allow the passage and circulation of water throughout the biofilm. This allows for nutritional delivery as well as waste disposal for each bacterial cell. Additionally, the polysaccharide matrix functions as a protective barrier from the external environment. The matrix coats and surrounds the bacteria, thus protecting each cell. This armor, if you will, is tough to penetrate. 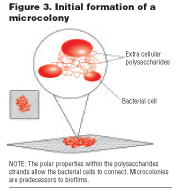 This is the best way for the microorganisms to exist. More specifically, many different types of bacteria function and thrive in symbiotic relationships. This means that potentially competing bacteria coexist in a relationship that benefits both partners. For example, a biofilm can be composed of aerobic (requiring oxygen) and anaerobic (not requiring oxygen) bacteria. Oxygen-requiring bacteria actually form a layer over the non-oxygen-requiring bacteria. Thus, the anaerobic bacteria exist in a low-oxygen microclimate while the aerobic bacteria have a neighbor that’s not competing for the oxygen they require. Meanwhile, they both benefit from the protective nature of a biofilm.

In summary, bacteria collaborate in the form of a biofilm in order to make each other stronger and more viable (although some may compete to survive). In pragmatic biological terms, this comes as no surprise. The science of microbiology has traditionally focused on individual species of bacteria, when in reality most microbial activity in an open ecosystem takes place in the form of a biofilm. Bacteria are genetically equip-ped to undergo the process of biofilm formation. Even individual bacterium floating in a test tube will stick to the side, given the opportunity.

Development variables
The first major variable seen in biofilm formation concerns the ability of a microorganism to adhere to a surface for an adequate period of time. This period must be long enough for the cell(s) to become irreversibly attached. The rate at which the biofilm grows beyond the initial attachment(s) is influenced by several factors. These include both the type and amount of cells that are present at any one time. Additional influences include the flow rate of water, temperature, surface characteristics and the amount of nutrition within the aqueous medium.

Pool and spa industry
What does this mean to the pool and spa industry? The implications are obviously of great magnitude. Combining continuous flow of water and heavy concentrations of circulating organic matter leads to a great potential for biofilm formation in improperly maintained tubs. With biofilm formation comes the possibility of sickness such as Legion-naire’s disease and symptoms related to 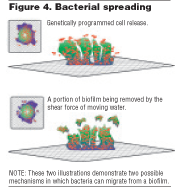 Psuedo-monas folliculitis infection (headache, fever, nausea, muscle ache). The individual culprits of disease such as these thrive in a biofilm. Further, there’s evidence of systematic detachment by bacterial cells either in a planktonic form or as an actual piece of biofilm. This detachment is intended to create new bacterial biofilms in other locations; however, these detached cells can become circulated among humans and lead to various outbreaks of disease (see Figure 4).

Preventing biofilm formation?
The answer to this question is pretty simple. If biofilms are removed, then bacteria have no place to go. It’s very important to remember that biofilms are simply a survival mechanism of bacteria. Individual bacterium come together as a whole in order to become stronger. A biofilm can be thought of as a home for bacteria. If this home isn’t present, then it’s very difficult for a high number of single species to survive.

It’s important to first understand how ozone works to destroy a biofilm before specific methodologies are introduced here. The extracellular polysaccharides previously discussed are the primary targets for ozone. This has been confirmed through use of transmission electron microscopy.

Upon encountering the polysaccharides of a biofilm, ozone acts like a pair of organic scissors. These scissors cut through the “skeleton” at a rapid pace. Thus, the entire support framework of the biofilm has been destroyed. Additionally, polysaccharides are the same materials used by bacteria to attach to the surface. These are certainly subject to ozonation as well, thus detaching them from the surface. Furthermore, ozone causes lysis—dissolution or disintegration—of individual bacterium. What are left are simply harmless microscopic fragments to be flushed and filtered out.

Increasing ozone efficacy
The previous two paragraphs discussed in general how ozone disrupts a biofilm. There is, however, the potential for ozone to be better utilized when it comes to biofilm disruption. It’s important to remember that a biofilm is like tough, viscous glue that bonds tightly to a chosen surface. Removing it requires substantial penetration and scraping.

Ozone, in a free-gas form, is a very strong oxidant (O3) that reaches a biofilm in a much higher concentration than many other potential disinfectants, such as chlorine. A biofilm is very hydrophilic, making it a very watery substance. This property, in addition to the highly polar polysaccharides, makes a biofilm an easy target for ozone. Therefore, it’s advantageous to expose the circulation routes of water to gaseous ozone. This would involve temporarily shutting off the water supply. Furthermore, effective methods of circulating gaseous ozone will need to be introduced. This doesn’t mitigate the more traditional use of ozone as water cleaner, but the concept is designed to meet a new requirement in pool and spa maintenance. The increased awareness of biofilms has brought about a paradigm shift in terms of how to deal with harmful bacteria that grow in recreational water environments, such as pools, spas, hot tubs and water parks. 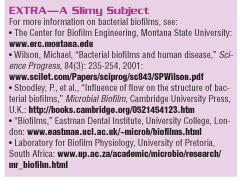 Conclusion
Biofilms have changed the way in which pool and spa disinfection is viewed. Microorganisms are no longer thought of individually. Biofilms must be included when considering keeping pools and spas safe. Ozone has a proven track record for doing this; however, the use of gaseous ozone must be incorporated into a regular maintenance program. Again, this certainly doesn’t mitigate other maintenance procedures, but the biofilm issue must be addressed.

About the authors
Ronald L. Barnes is founder and CEO of Prozone International Inc. (established in 1977) and Vistek Corp. (launched in 1984). He has a bachelor’s degree in physics and a master’s degree in electronic engineering. Barnes also is a consultant to a number of government agencies and departments (Department of Defense, Department of Interior, NASA’s Marshall Space Flight Center), the National Spa & Pool Institute, and a number of major corporations (GE, Boeing, United Technology, Lockheed, Ball Corp., Learjet and Beckman). A member of the International Ozone Association and several related organizations, Barnes is also the holder of patents in ozone water treatment, ozone generators,  plasma generators, optical storage scanners, holographic scanners, electrophoresis, laser doppler radars, and an ozone contact lens cleaner. He can be contacted at (256) 533-0215.

D. Kevin Caskey has been a consulting microbiologist for Prozone International and Vistek Corp. since 2001. He has a bachelor’s degree in microbiology. In addition to projects related to the pool and spa industry, his consultation includes cooling tower sanitation and biotechnology. Caskey also works as a research assistant for the Vanderbilt University School of Medicine in Nashville, Tenn. He can be contacted at: [email protected]