Bottled Water: A Perspective on the New Titans

Growth in the bottled water industry after two decades continues to come in strong. But the basic nature of the industry and the forces driving it have changed dramatically since Pepsi-Cola’s introduction of Aquafina in 1994.

A risky maneuver
At the time of Aquafina’s introduction, bottled water had been touted for years as “the smallest yet fastest growing segment of the beverage industry.” Some even believed the industry was showing signs of market maturity. Several large companies were moving to consolidate positions in the home and office delivery business—a seemingly more lucrative and a more rapidly growing bottled segment than retail. The industry was vibrant, with key players focused on natural spring water, which translated into an industry with regional brands tied to local spring water sources.

Many viewed Pepsi-Cola’s launch of Aquafina as a huge risk. After all, Aquafina was a “purified tap water” entering a market where natural spring water was “king.” But Aquafina wasn’t Pepsi’s first U.S. foray into bottled water—it had owned, operated and sold a spring water business (Ice Mountain) in the mid-1980s. And it wasn’t Pepsi’s first foray into “purified water” either—Glacier, a purified and mineralized bottled water brand packaged in PET plastic, was successfully launched by a Pepsi franchise in the early 1990s in Argentina, a market dominated by natural mineral water brands in glass bottles. 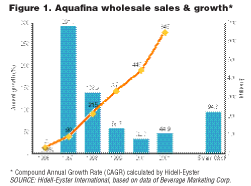 Still, the results for Aquafina were staggering (see Figure 1)—it rapidly rose to the No. 1 brand position in the U.S. market, registering annual sales of $645 million in 2001 with an impressive five-year compound annual growth rate of 95 percent.

Picking up the challenge
Perhaps more impressive is the performance of Dasani since its introduction by Coca-Cola in 1999. This entry was viewed as a direct response to the success of Aquafina. Like Aquafina, Dasani is non-carbonated water, purified from a bottlers’ source water (generally municipal water). In contrast to Aquafina, a formula packet of minerals is added to the purified water to create Dasani. These packets are sold to franchises much the same way syrup is sold to franchises.

Beverage Digest sums up some of the incentives for Coca-Cola to produce Dasani:

“Days before Coke’s announcement [to launch Dasani], Henry Schimberg, CEO of Coca-Cola Enterprises, observes: ‘We have waters in our portfolio on a market-by-market basis. There is no water we distribute nationally. The ability to distribute and promote a water nationally would offer us a significant advantage.’ Adds: ‘Consumer (research) finds purified water is equally attractive as spring water.’ Continues: ‘Purified water would give us a cost-of-goods advantage. So, all-in-all, the introduction of a water (from Coca-Cola Co.) would be a big positive for CCE.’”
—Beverage Digest, Feb. 19, 1999

In its third year (2001), Dasani gained the No. 2 brand position in the bottled water market registering annual sales of $560 million, almost 90 percent of Aquafina’s sales in that year (see Figure 2). This in part is a result of Coca-Cola’s heavy advertising support for 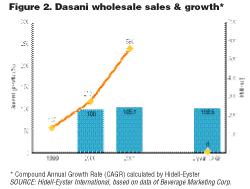 Other partnerships
Already this year, Coca-Cola has expanded its presence beyond the Dasani brand through agreements with Groupe Danone (Danone), the second largest player in the U.S. bottled water market. In April, the two companies entered into an agreement under which Coca-Cola will market and distribute the Evian brand in North America. Franck Riboud, Danone’s chairman and chief executive officer, clearly recognizes the power of Coca-Cola: “The agreement provides Evian with access to the marketing expertise of Coca-Cola in North America. Aligning Evian’s interests in North America with The Coca-Cola Company and system will advance our goals for the brand by taking advantage of the experience and strength of Coca-Cola in brand-building and distribution of beverages.”

In June 2002, Danone and Coca-Cola entered into a partnership for the production, marketing and distribution of Danone’s retail bottled water business in the United States. Danone’s contribution to the partnership included the assets associated with its retail bottled spring and source water business in the United States, including five production facilities, a license for the use of the Dannon and Sparkletts brand names, and ownership of several other brands. Coca-Cola’s contribution included marketing, distribution and management expertise and a cash payment for a 51 percent equity interest in the partnership. Excluded from this agreement were Danone’s Evian brand, The Coca-Cola Company’s Dasani brand and Danone’s home and office bottled water delivery business. Jeff Dunn, Coca-Cola North America president and chief operating officer, said, “This partnership enhances our water strategy in the United States by allowing us to participate fully in the fast-growing retail water category for the entire Coca-Cola system. By expanding our water brands to include a national offering in all sectors of the water category with purified, spring and source waters, we can better satisfy the needs of more consumers and occasions, and offer our bottling partners and retailers a more compelling value proposition.”

Coca-Cola and Pepsi-Cola accounted for 76 percent of the carbonated soft drink volume in 2001, contrasted with 17 percent of bottled water wholesale sales in 2001. Bill Peciorello, a beverage analyst for Morgan Stanley Dean Witter, projects that the distribution systems of Coca-Cola and Pepsi-Cola will allow them to collectively capture about 50 percent of the U.S. water business by 2005-2006. This was reported in Beverage World magazine’s Wall Street Roundtable on Jan. 15.

A market’s changing face
Pepsi-Cola and Coca-Cola have changed the face of the bottled water industry: 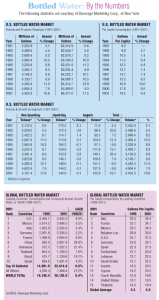 All of this is within the context of the commitment made over a decade ago by Coca-Cola and Pepsi-Cola to the total beverage concept, with positions in iced teas, coffee drinks, fruit juice beverages, sports drinks and functional beverages. Functional beverages are those with some ingredients added about which health claim benefits can be made. These are regulated as food and the added ingredients must be “generally recognized as safe” (GRAS) under federal regulation. In the water category, Aquafina ESSENTIALS was introduced in May 2002 and Dasani Nutriwater is slated to be launched soon. These waters don’t meet the FDA definition of bottled water—but rather are beverages. Ingredients may include flavors/essences, vitamins, fructose/glucose and other agents that may impart a health benefit such as fiber, gingko biloba, cholesterol lowering agents, to name a few.

The impact is felt
Needless to say, the bottled water industry has felt the impact. There’s no questions Aquafina and Dasani may have created incremental sales for the industry overall, but there is also no question that these brands have displaced sales that would have been realized by the key bottled water players active in Pepsi-Cola’s and Coca-Cola’s distribution outlets—primarily Nestle, Danone and Suntory.

Aquafina and Dasani accounted for approximately half of the industry’s growth in sales dollars in 2000 and in 2001. There is no question that Pepsi-Cola and Coca-Cola will continue to play a key role in the future direction of the industry.

Conclusion
Many believe that the three key bottled water players moving forward will be Nestle, Pepsi-Cola and Coca-Cola. It remains to be seen whether Pepsi-Cola and Coca-Cola will enter the U.S. home and office delivery business. While the PET segment of the bottled water industry has been “inundated” by the entry of Aquafina and Dasani, the home and office delivery segment has experienced competition from point-of-use (POU) players, such as Culligan, and in some cases bottlers have incorporated POU coolers into their offering. The POU business has economic potential that merits close examination.

About the author
Kathleen Ransome is director of the Beverage Division of Hidell-Eyster International. She provides business and financial consulting services for international clients in market research, strategy development, business plans, and mergers and acquisitions. She’s also a past member of the WC&P Technical Review Committee and remains active in the International Bottled Water Association. She can be  reached at (781) 748-8040, (781) 749-2304 (fax) or email: [email protected]