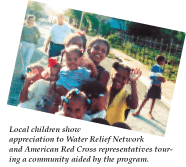 United for a cause
Helping to provide safe drinking water to communities in need is a priority of the chlorine industry. In 1996, the Chlorine Chemistry Council (CCC), a national trade association representing manufacturers and users of chlorine and chlorine-related products, launched the Water Relief Network (WRN), a partnership program with the American Red Cross. The WRN was borne out of a need to equip disaster-prone, impoverished communities with knowledge and resources to protect against waterborne disease.

The network has two goals—help to provide immediate relief to communities affected by disasters (hurricanes, tornadoes, flooding, etc.) and promote and foster health and sanitation through long-term, sustainable initiatives in regions lacking access to clean water and other basic needs. 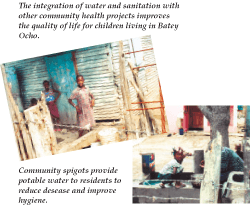 With the help of 56 private companies and chlorine industry associations in the United States, Europe and Canada, the WRN provides the American Red Cross and other disaster relief agencies with both financial resources and essential supplies. Immediately following a disaster, the WRN quickly provides the relief community with easy, in-kind access to many of the products necessary to restore and maintain public health. Through the members of the chlorine industry, the American Red Cross and others are given immediate access to water disinfection chemicals used to treat large quantities of drinking water. Also available are surface disinfectants such as chlorine bleach, plastic water containers to help residents carry safe water home from temporary distribution sites, plastic sheeting to temporarily cover and protect homes damaged by high winds, and chlorine-based PVC pipe and fittings for damaged permanent distribution systems.

In addition to providing immediate hope to communities struck by disaster, the WRN supports long-term, sustainable initiatives by building much-needed safe water infrastructure and implementing public health measures for vulnerable societies. Since 1996, the WRN has reached five continents, with initiatives in such countries as Malawi, India, Moldova, Madagascar, Cuba, Tajikistan and the Dominican Republic.

The southwest region of the Dominican Republic—constituting the eastern side of the island of Hispañola; Haiti lies to the west—remains devastated from the effects of 1998’s Hurricane Georges. An assessment of health conditions in the region found that more than 40 percent of households lacked basic hygienic facilities, and residents of more than half of the households were consuming untreated drinking water.

One of the program’s goals was to increase the quality and access to potable water by constructing systems that transport clean drinking water into targeted communities. The WRN provided disinfectants to purify the water and PVC pipe to deliver safe water to homes and communities.

Village by village
Depending on the individual needs of the targeted communities, new or refurbished pumps, taps, rural house connections, storage facilities and other water distribution components were put in place to carry safe water to thousands of vulnerable families in villages such as Batey Ocho, Bella Vista, Caballero, La Guazara and Santa Elena.

Following are brief descriptions of activities and outcomes within the Dominican Republic:

Batey Ocho
A rural community in the middle of sugar cane plantations, 402 families receive water from a well with a depth of approximately 40 feet inside the village. Water is pumped from this well to a storage tank from where it’s distributed to public taps and house connections. The well is cleaned and its capacity is tested. Following these steps, a new pump and solar panel to power it will be installed. Because existing public taps have been misused, new taps are being constructed.

Bella Vista
A suburban community connected to an urban water supply system, it receives water three days a week for a period of two hours. While a local water committee attempts to convince the government to increase the water distribution hours, the WRN helped construct 210 house connections that provided the community with larger storage facilities at the household level.

Caballero
A small community, along a dirt road with 25 families, it receives water from wells around the village. These wells form part of the larger water supply system serving a greater area. From the wells, water is pumped to storage tanks where it’s then supplied to the town. The project has provided the village with numerous rural house connections.

La Guazara
A 385-family agricultural village in the mountains, the water supply in La Guazara is provided by connections to the water supply of an area sugar company. The WRN is helping to construct a new distribution network, through which each house will have its own rural connection.

Santa Elena
Santa Elena is made up of a group of seven communities situated within approximately four miles of one another. These communities receive water from a storage tank over a mile away. Because the system was poorly maintained for several years, the communities haven’t received any water in over two years. Residents had to buy water from passing water trucks. The WRN helped to reconstruct the water intake, repaired the tank and maintained the pumps, electrical system and wiring.

Lending a hand, looking ahead
According to a program report by the American Red Cross International Services referring to the Dominican Republic initiative: “Improvements in water, sanitation and hygiene are expected to reduce the burdens of disease and improve the overall health of the people.”

With the help of the WRN, the American Red Cross was able to accomplish its broader goals of distributing 100 tons of food, plastic sheeting and clean-up kits and feeding 156,000 people in the worst-hit areas of the Dominican Republic. Concurrently, the water and sanitation program has increased the quality and access to potable water via the establishment of safe water systems in the targeted communities. Together, these accomplishments strengthen the capabilities of the Dominican Red Cross in maintaining local public health.

Globally, donations are helping financially and ecologically challenged communities thwart the very real threat of waterborne disease outbreaks. The American Red Cross adds, “With the continued support of groups such as the Chlorine Chemistry Council, we are able to mobilize relief and provide comfort to families devastated by disaster.” 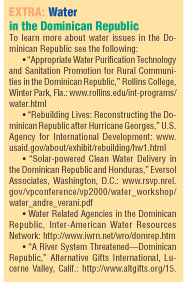 Conclusion
Access to safe drinking water remains an international crisis. Only through global cooperation and with significant resources will we be able to address this challenge; however, the WRN demonstrates that partnerships, preparedness and prompt response can help make small, but important progress in building, rebuilding and protecting fragile water infrastructures in all parts of the world.

About the author
C.T. “Kip” Howlett, Jr., is the executive director of the Chlorine Chemistry Council, a business council of the American Chemistry Council based in Arlington, Va., representing the manufacturers and users of chlorine and chlorine-related products. He can be reached at (703) 741-5850, (703) 741-6084 (fax) or email: http://kip_howlett@american chemistry.com.