Making All the Right Choices in the Lone Star State: Choice Water Conditioning of Pflugerville, Texas 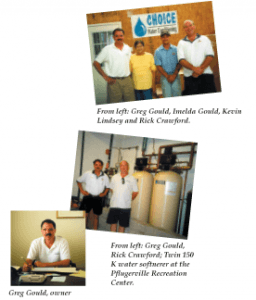 The area from Abbott City to Yoakum, Texas, claims nearly 500 towns/cities, one of which is Pflugerville—home to Gregory Wayne Gould and his four-year-old business, Choice Water Conditioning. You may think Pflugerville is a remote outpost if you consider Gould’s business is: 1) located on Jesse Bohls Road and, 2) Mr. Bohls also happens to be Gould’s neighbor. After all, how many people can claim that they live on a street named after themselves?

A burgeoning town of 20,000, Pflugerville really isn’t an out-of-nowhere place; it’s 15 miles northeast of Austin. In fact, many people who work in the capitol have decided to leave the city and plant roots in Pflugerville, Round Rock, Georgetown and other outlying communities nearby.

Pre-plumbing advantage
This benefits Gould, 45, in that home subdivisions, until recently, were going up at a rapid clip. According to Gould, Pflugerville had 4,000 residents just 10 years ago. Plus, he says, “Most homes are pre-plumbed for water softeners” (see EXTRA). In that vein, Gould adds, it also helps that the business works closely with many builders and realtors.

Water softeners, reverse osmosis (RO) and carbon filters make up the majority of Gould’s business. As an independent water treatment dealer, he has taken a unique approach not chosen by some of his brethren. He has aligned himself with three different manufacturers of water softeners — Alamo, Ionics and Puritan. He explains, “I first started with Alamo; I was really familiar with their products. They’re close to us, right down the road in San Antonio.” Meanwhile, Ionics provides higher-end equipment for the business.

“We kind of do things a little different than most water conditioning companies,” he readily admits. “Being in this business for awhile, I have worked with other companies that just have one specific kind of unit that they promote. [But with a more limited selection], it seems like we had to walk away from a lot of business because people expect something less expensive or different.”

In addition, Choice Water Conditioning uses CUNO RO units and whole-house carbon filters from Puritan “that are real popular down here where the chlorine is real high.” How high is the chlorine? He answers, “Sometimes as high as swimming pool chlorine, about 3 parts per million” (see Table 1). The cause of chlorine, Gould says, is because cities just outside of Austin use municipal water predominantly. Salt delivery service and rental units are also available to customers. 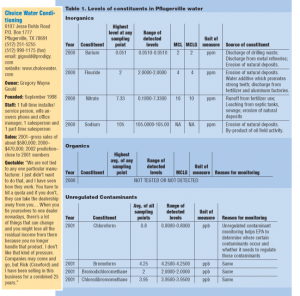 Hard as a rock
Hardness is also prevalent at 25 grains hardness. Naturally, there exists a great amount of farmland, which has a tendency to rely heavily on well water. Gould contends, “If you dig a foot deep, you will hit a layer of limestone.” 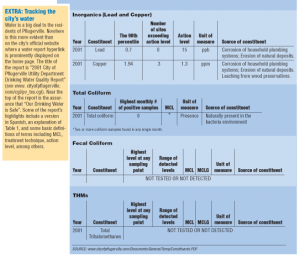 Residential applications still account for 98 percent of the business while commercial/industrial (C/I) makes up the remainder. Included among the business’ C/I accounts are the Pflugerville Recreation Center, a furniture store, a doctor’s office and some lake water retrieval water systems. Most of Gould’s customers are on municipal water — 90 percent — with the balance having well water.

Need to expand
Whatever the rationale, things have worked well for Gould since the dealership’s inception in September 1998. In March, he moved Choice Water Conditioning to its current facility because business had expanded and required more space. Gould now has 2,000 square feet at his disposal, the majority devoted to warehouse space.

“It’s a little bit slower this year,” he says. “We’re in an area where there is a lot of high-tech industry as well as computer companies. A lot of people in those industries seem a little more uptight these days. There have been some layoffs.” Besides being a major college city, Austin is home to major businesses such as Dell, AMD, Samsung and IBM.

Even with a leveling off of business so far this year, Gould expects gross revenues will nearly match last year’s figures of $580,000. That’s up 23.4% from 2000 sales. Careful not to overextend himself and short-change his 800 customer accounts, Gould says the business is “growing at the right speed and headed in the right direction.”

From the start
Born in Houston and raised in Galveston, Gould has stuck to his roots in the Lone Star State. After graduating with a bachelor’s degree in industrial arts from Southwest Texas State University, he knew exactly what he wanted to do in the employment world: “I really wanted to get into sales. At the time, the only opportunity that presented itself was in the water conditioning business. I started with a different company. I learned a lot in there… I decided that I wanted to do things my way so we opened up our own water conditioning company.”

Gould is a member of the Texas Water Quality Association and says there are five or six water dealerships in the area — a number he considers relatively high considering Pflugerville’s population.

Aside from working with the home building/selling industry, Gould advertises his business in regional phone books and boasts a website, http://www.choicewater.com, which was launched in 1999. He says, “We haven’t made a lot of sales through the website, but it has given us credibility. It gives customers in the high-tech industry easier access to company information. After we leave our business cards, it gives us exposure without having a salesperson in their house.”

Conclusion
Still, he says, “Our bread and butter is getting out there in the field and meeting the people. If we sat around waiting for people to come to our showroom, we would probably go broke.”

Gould wants to expand in all areas of the business — service, sales and office space. “Hopefully, I can relinquish some of the things I’m having to do and concentrate more on operations,” he says. “There is a lot of room for growth for our salespeople, and there are a lot of untapped areas that we have not marketed our products to.” He clicks off some of the names — Cedar Park, Marble Falls, Lakeway and Lago Vista. You know, some of the other 500 towns in Texas. Gould smiles at the thought as well as the potential.