Hardware Show Gets Hit with an Innovation Drought

Not only was the 2002 edition of the National Hardware Show a little short on attendance, it also suffered from a drought of ideas in the water filtration sector. In short, innovations were in short supply. New products were far and few between and it was mostly cosmetic improvements that ruled the day at Chicago’s McCormick Place. 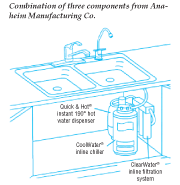 The new “soft edge” aesthetics, however, aren’t the end of improvements in the new generation of WaterBoss, according to Hague. “A concealed sliding port replaces the old salt lid and the new user-friendly, redesigned electronics include a single-set controller, an automatic safety shut-off, and a visible water meter light that flashes when water is being used,” said Hague. All functional components are manufactured by Hague in its Groveport, Ohio, facility. Model 550 is designed for “city water” and retails for under $400. Model 700, retailing for around $436, is a 0.7 cubic foot (cu. ft.) resin capacity softener with a built-in self-cleaning filter. Model 800, with a $496 SRP, has a 0.9 cu. ft. resin tank. WaterBoss mixes a 0.5 cu. ft. of KDF with resin for iron and H2S. The new WaterBoss softener line features new full-color packaging and ships with a videocassette for do-it-yourselfers. “The first of our newly designed WaterBoss softeners shipped the week before the Hardware Show,” said Hague.

Once again Culligan presented an impressive assortment of products, in the largest exhibit space of all water filtration companies, at the Hardware Show. The company introduced its new IC-750 icemaker filter cartridge, described by consumer marketing manager Linda Halfmann as “a good bet for compact RV drinking water systems as well as refrigerator icemakers.” The compact unit features the same twist-and-turn filter cartridge first introduced by Culligan at last year’s show. The IC-750 will retail for about $16.95, compared with the $29.95 SRP Model IC-1000 icemaker filter introduced a year ago. Replacement cartridges are priced at $12.95 SRP. The cartridges are NSF certified for taste, color and odor and require changing after 2,500 gallons or 12 months. “Owners of RV vehicles can be provided with a handy plug to facilitate winterization of the unit,” said Halfmann.

Culligan again displayed its undersink SY-2300 and SY-2650 MTBE filtration systems, sold by its franchised dealers as well as at retail outlets. Both carbon block filtration systems reduce MTBE and a wide range of other contaminants including cysts, lead, certain pesticides, herbicides and other organic chemicals, asbestos, mercury and sediment. Cartridges are rated at 500 gallons. The SY-2300 retails for about $119, and the SY-2650 with electronic filter monitor sells for about $160 at retail. One thing missing — USFilter brand water softeners and RO drinking water systems, currently sold through Costco and Ace Hardware’s central warehouse. The company suggested a new brand might be developed for these categories at retail, so as to protect the interests of its franchised Culligan dealers.

Submerged by pump brand
While Omnifilter has been the traditional brand leader in undersink and whole house filters sold by DIY retailers since 1975, there’s continuing evidence of significant sales erosion from competitors such as GE, Sears and Culligan, since Sta-Rite Industries Inc. acquired Omnifilter less than three years ago. At this year’s Hardware Show, Omnifilter shared a 30-foot booth with Sta-Rite’s Flotech and Simer pump brands. Flotech, the dominant pump brand in U.S. DIY distribution, showed a wide selection of products compared with Omnifilter’s very limited show assortment, which included no new products.

Like last year, Omnifilter featured its 750-gallon capacity CBF-20 undersink point-of-use (POU) system, rated for MTBE as well as lead, cysts and other contaminants. A company official promised new packaging for Omnifilter products in the coming year, one that will help “simplify product selection.” Sta-Rite remains a private-label supplier of POU/POE (point-of-entry) filters to GE with products sold through Home Depot stores. Simer, in addition to specialty pumps, has a line of pressure tanks available through plumbing wholesalers. 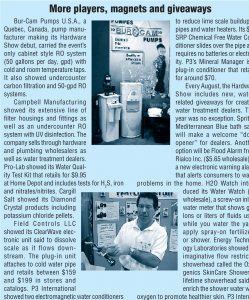 Carafes and coolers
Prestige Home Comfort has licensed the Sunbeam brand for its line of water coolers for home and office. It has also introduced a Sunbeam brand carafe that fits in the refrigerator door and retails for as low as $7.99. Universal filter cartridges are NSF certified, according to owner Chris Venne. The importer also showed Sunbeam brand water coolers made in China. A hot/cold countertop model will retail for as little as $59 and its Sunbeam floor cooler with built-in refrigerator and hot/cold/room temperature taps will retail for about $129, said Venne. The coolers will target home-delivered bottled water users.

Royal Sovereign International showed floor-mount water coolers with suggested retail prices from $139 to $159 for cold water and a unit that contains a small refrigerator. A hot/cold/room temperature cooler will sell between $179-199, said Mike Villaplana, who believes that “more and more food stores will stock three and five gallon bottles of water selling from $2.50 to $5.50 in the years to come, targeting consumers with home water coolers.”

Filtered coolers with bottles
Elkay, which exited the delivered water cooler market two years ago, is betting that more and more American homes and offices will opt instead for gravity-filtered water from refillable three-gallon bottles, which they can supply to retailers who carry their stylish water coolers. The heart of the system is Elkay’s pureSmart cartridge, rated for 150 gallons of water filtered to NSF Standard 43. A built-in usage meter alerts users when fillers reach capacity. Elkay has also redesigned the three-gallon polycarbonate bottle that holds the cylindrical cartridge. Elkay didn’t show its line of decorative ceramic water dispensers at the Hardware Show. Floor-mount pureSmart dispensers are priced at $179.99 to $199.99 SRP (for hot/cold).

Conclusion
Despite some major companies conspicuous by their absence, more than a dozen water treatment players came to Chicago seeking new customers among the hardware store-buying groups and independents who still attend this show. As with many of the earlier 2002 trade shows, attendance lagged and the show’s future remains uncertain.

David H. Martin is president of Lenzi Martin Marketing, of Oak Park, Ill., a firm specializing in water improvement and environmental marketing that integrates old and new media. He can be reached at (708) 848-8404, e-mail: newage@attbi.com or website: http://www.lenzimartin.com.