By Peggy Striegel and Suzanne Ortiz 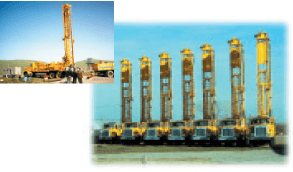 Recently, seven water well drilling rigs via an American company were sold to the Turkish government.

The water situation in Turkey is sometimes misunderstood. Although Turkey currently has greater water resources than some of the surrounding countries, it still has insufficient supply by world standards. Turkey has approximately one-fifth of the water per capita of countries considered rich in water resources. One of the primary reasons that Turkey is facing a problem with capacity is that its current capacity is underutilized.

How does a drill manufacturing company from Oklahoma become involved with a member of the Turkish government to help discover and exploit additional capacity through the supply of drilling rigs and technical training to Turkey? For this particular company, the connection is more logical than you might think.

On solid footing
The business has been working with various entities in Turkey to supply equipment for their drilling needs since the 1960s. With a life span of 25-30 years, many of the rigs are still in use today. The quality and entrepreneurial spirit of the company has easily translated to the Turkish market.

Anyone who’s familiar with the two seemingly disparate entities—Oklahoma and Turkey—would know that at various times in their histories, they have shared a similar problem with limited water resources. One company official recognized the irony in the situation facing a world leader in the design and manufacture of water well drilling equipment. After all, Oklahoma went through the “dust bowl” period in the 1930s. And there has been a drought in the Middle East for several years now, complicated in Turkey by a series of earthquakes during that same time—the most significant in August and November 1999, December 2000 and February 2002—which have severely affected local infrastructure, including that for water.

“If anybody appreciates the importance of water, we do,” the official said. “That’s why we take such care in designing and building our equipment and why we have been able to build such a successful global marketing organization.”

Water as political issue
In a region like Turkey, water is especially important and often becomes a very political concern. With negotiations among Turkey, Syria and Iraq consistently occurring for water rights to the area’s surface water, new sources of water and the resources to utilize them are welcome and necessary.

In May, the company announced it had shipped seven of its advanced water well drilling rigs to the Turkish government, specifically Koy Hizmetleri Genel Mudurluga (KHGM)—the General Directorate of Rural Services. This is the entity responsible for water, electricity and roads in rural communities of the country. KHGM focuses on water well drilling for human consumption, not irrigation. Turkey’s projects—which include small-scale dams, distribution, sewage and treatment systems—are financed by the government and implemented by domestic companies.

The delivered rigs will be drilling in three major areas—Ankara in mid-Anatolia; Elazig, Erzurum Kars, Siirt, and Van in the eastern and southeastern regions, and Bursa in the western region.

Versatile rigs
Due to landscape variation in Turkey—from mountainous areas with limited development to more highly populated rural areas—drilling presents a unique challenge because the mediums are so different. The new rigs provide the perfect answer because they’re capable of using both fluid and air drilling. The rigs employ both the tri-cone bit used in unconsolidated regions with fluid drilling, and the air hammer bit used in the rocky regions to break through more solid terrain.

Also important due to the terrain encountered in the region, the rig requires only one engine to run both the truck and the rig. The Peterbilt Model 357 6×6 AWD truck’s unique gearbox and 515 horsepower (hp) Caterpillar engine eliminates the need for the second engine and distinguishes the design from others. No additional power source is needed. This consolidated efficiency makes it easier and more reliable for drilling in more remote regions in Turkey. 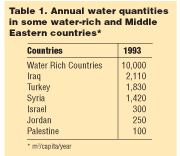 Doing it right over time
This extreme attention to detail and quality requires significant building time. Between creating the rigs necessary for the project and finding qualified personnel to coordinate with the Turkish officials, this contract has taken over three years to complete.

In the recent contract, as with most of its international agreements, the company supplies not only the rigs but also the training necessary to ensure the drilling program will be a success. The company feels that by supplying all necessary tools and equipment and providing hands-on training, a greater satisfaction level and a continuing relationship will be achieved.

Two-month training
Training representatives were in Turkey for two sessions totaling eight weeks. In that time, over 30 engineers, 10 operators and 10 mechanics were trained on various aspects of the rigs. Emphasis was placed on training for the hydraulics operational systems, maintenance and operations systems of the drill as well as the safety aspects of the drill. The crews were selected and positioned by KHGM and were trained on both fluid and air drilling techniques.

The training included classroom instruction in Ankara and hands-on training at field sites in Elazig, Kars and Erzerum. The company’s agent in Turkey, Mapek coordinated its representatives to train alongside with KHGM’s crews, and have stayed on during the drilling program to provide assistance. During field training, company representatives and KHGM trainees drilled test holes and completed several wells. 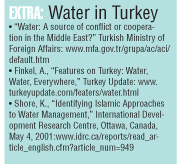 The average outside diameter for these wells is 12-¼ inch, and the average depth is 600-900 feet. With many villages still lacking adequate water supply, these wells will continue to provide a much-needed source. In the major metropolitan areas, more capital has been available and invested to develop the infrastructure, but the rural areas are also being addressed to ensure that their consumption needs are met.

Conclusion
Although the Turkish government and various agencies are working toward a long-term feasible solution to improve the overall water situation in Turkey, the current partnership between the company and KHGM is making headway in this quest. As the Turkish infrastructure continues to develop, the region will experience more growth as it expands into the rural areas. With continuing plans and support from the government, this mission will succeed.

Acknowledgment
The authors would like to thank George E. Failing Company (GEFCO) international sales vice president Wesley Weed for his assistance on this article. He can be contacted at (580) 234-4141 or email: [email protected]

About the authors
Peggy Striegel is president of Striegel & Associates, a public relations and marketing firm in Broken Arrow, Okla., and Suzanne Ortiz is account coordinator with Striegel. They represent Enid, Okla.’s George E. Failing Company (GEFCO), manufacturer of Failing® and SPEEDSTAR® drilling rigs and a division of Blue Tee Corporation in New York. GEFCO has sold 125 SPEEDSTAR water well drilling rigs to the Turkish government, including the seven Model 40K-DH rigs discussed in this article. The authors can be reached at (800) 663-1136 or email: [email protected].