Summary: Buoyed by stateside evidence supporting its claims, one company is looking to expand its reach by implementing on-site mixed oxidant generators in Puerto Rico. Here is an article detailing some previous results and reasons for selecting such a system.

The U.S. Environmental Protection Agency’s (USEPA) new limits on total trihalomethanes (TTHMs) and the five haloacetic acids (HAA5) are a challenge for potable water system operators in Puerto Rico, a small island in the Caribbean Sea wedged between Cuba and the Virgin Islands. A significant portion of the 125 filtration plants in this tropical paradise, which produce close to 1.9 million cubic meters per day (500 million gallons per day, mgd) of drinking water, receive raw water from lakes laden with organic TTHM precursors. The Stage 1 Disinfectants/Disinfection By-Products (D/DBP) Rule promulgates a reduced limit of 80 micrograms per liter (µg/L), or parts per billion (ppb), for TTHMs and only 60 µg/L for HAA5. The effective dates of enforcement were last January for large drinking water systems serving more than 10,000 people, and January 2004 for small drinking water and groundwater systems.1

Due to its challenging raw water characteristics, the Coto Laurel water treatment plant in Puerto Rico presented an ideal opportunity to evaluate potential treatment solutions. The 7,570 cubic meter (2 mgd) plant, with two parallel processing modules, receives water primarily from the Toa Vaca Lake with a demand of up to 68 kilograms (150 pounds) of chlorine per day. From time to time, operators are forced to increase the chlorine injection as a pretreatment strategy to control incoming manganese levels and taste and odor problems. Even though this strategy has proven to be effective at not only controlling manganese levels—but also reducing customer complaints due to bad odor and taste—the chlorine pretreatment results in increased formation of TTHMs, putting the plant on the border line of the Stage 1 DBP limits.

Selection of on-site generation
The plant completed a screening evaluation of several water disinfection alternatives in January. A decision was made to evaluate on-site generation of both hypochlorite and mixed oxidants, utilizing two different on-site generator models from the same manufacturer. Both models use only salt, water and power, eliminating hazardous chemicals typically associated with water disinfection and providing a safer working environment for plant operators and the surrounding community. The on-site generation process feeds a brine solution through an electrolytic cell, producing an oxidant solution that is then stored in a day tank and injected into the water stream at rates appropriate for treatment 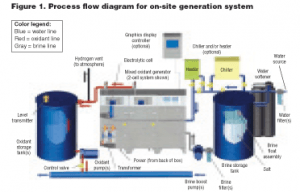 objectives. (See Figure 1). The different oxidants produced by the two systems are a function of the cell design and operation parameters. The sodium hypochlorite unit produces chlorine bleach while the mixed-oxidant unit produces a solution that’s primarily measured as free available chlorine (FAC), but contains additional chlor-oxygen species that have a synergistic effect.

Classic analytical chemistry for measurement of these other oxidant species doesn’t function in the presence of a large chlorine matrix. Since only chlorine can be measured in the mixed-oxidant solution, the company relied on behavioral results to differentiate their solutions from hypochlorite solutions. Third-party laboratory and anecdotal evidence with mixed oxidants includes superior inactivation rates that are several orders of magnitude higher than equivalent doses of chlorine, removal of biofilms, longer-lasting chlorine residual at a reduced dosage, and reduced formation of TTHMs and HAA5. It’s known that the other oxidants must be chlor-oxygen based because they are formed through the electrolysis of sodium chloride (NaCl) and water (H2O). Although the other oxidants appear to be short-lived, their presence does cause measurable behavioral differences.

Chlorine in the form of gas, sodium hypochlorite or tablets can be used for a variety of applications, including both final disinfection and pretreatment. The problem with using chlorine in pretreatment, as Coto Laurel had already experienced, is an increased tendency toward TTHM formation. Many sites that could benefit from a pretreatment oxidant application are prevented from utilizing chlorine due to the increase in DBPs. In contrast, there are various sites that use a mixed-oxidant solution in pretreatment with no adverse effect on DBPs. Not only do these sites fail to see an increase in TTHM production, but they have actually observed up to a 50 percent decline in the formation of both TTHMs and HAA5.

For example, the City of Santa Fe, N.M., treats mountain run-off water in its 37,850 cubic meter (10 mgd) treatment plant. During spring flows, the raw water turbidity became so high that the plant was forced to slow the flows to 15,140 cubic meters (4 mgd) to reduce turbidity. The coagulant chemicals alone weren’t sufficient to accomplish turbidity reductions, and no chlorine could be added to the pretreatment stage due to TTHM formation. After installing a mixed-oxidant generator with injection points both in pretreatment and final disinfection, the water plant was able to maximize flows at full capacity, cut turbidity in half, and reduce TTHM levels by nearly 50 percent.2

Another example is the City of Las Vegas, N.M., which had severe algae growth in its clarifiers that would form up to a 5-centimeter (cm), or two-inch, thick algae mat every few weeks. The tanks had to be alternately drained and scrubbed down over the course of the month to remove the algae build-up. Las Vegas was unable to use chlorine gas in pretreatment due to excessive TTHMs formation. Upon conversion to mixed oxidants—also applied in the clarifiers and clearwell—the algae immediately disappeared, aluminum sulfate hydrate (alum) doses were reduced by over 40 percent, and TTHMs were reduced by 44 percent to a final average level of 45 µg/L, well below the new limit.3

With similar process improvements anticipated at Coto Laurel, the final choice was an on-site mixed-oxidant generator for the pilot test. For Department of Health approval, the on-site generator needed only to prove that it could provide a satisfactory chlorine residual. The official test period for the company’s equipment lasted only two weeks and ended last March 8.

Protocol and monitoring strategies
Baseline results were determined with use of chlorine gas the week before installation of the units. Monitoring continued for an additional week with disinfection applied to both water flow modules. During the test’s second week, mixed oxidants were applied only at Module 1 and and gas chlorine at Module 2.

At this point the test was officially complete, having demonstrated adequate chlorine residual capacity, but the plant manager requested several more days to view the units in operation. The week after the units were taken off-line, both modules were again treated with chlorine gas to bring the system back to the baseline.

During testing, the site monitored total organic carbon (TOC), manganese, and TTHMs both at the plant and distribution. TOC levels in the raw water were used to determine the potential for TTHM formation in order to more accurately compare any possible TTHM fluctuations.

Discussion of results
The on-site mixed-oxidant generator not only exceeded Department of Health expectations for chlorine residual, but also exhibited TTHM reductions, enhanced manganese oxidation, reductions in coagulant chemicals, and taste and odor improvements. In fact, several customers called the local water authority during the phase of the test wanting to know what it did to improve the taste and odor.

It usually takes a water system several months to achieve biofilm removal with use of mixed oxidants, thus reaching the maximum potential for TTHM reduction. Since the Coto Laurel test occurred only over a two-week period, half of which utilized a mixed-oxidant/chlorine gas disinfectant 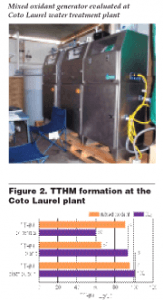 mixture (thus reducing the positive effects of mixed oxidants on distribution piping), there wasn’t sufficient time to observe a TTHM reduction in distribution (see Figure 2). This initial lack of effect in the distribution system is common when compared with other installations. Customers may report a gradual decline in TTHM levels in distribution that can take several months to occur, whereas the decline at the plant is more rapid.

Conclusion
It’s expected that the Department of Health of Puerto Rico will certify on-site, mixed-oxidant generators to be used for both pre-treatment and final disinfection at the Coto Laurel water treatment plant as well as other sites throughout the country.

About the author
Carlos Gonzalez is vice president of New Technology Systems of San Juan, Puerto Rico, a distributor of MIOX on-site generation equipment for the island. He earned his bachelor’s degree in biology from the University of Puerto Rico. His professional career has developed around process control and optimization for the chemical, medical device, pharmaceutical and water industries. Gonzalez is also a consultant for cost reduction and six sigma-related strategies for his clients. He can be reached at (787) 782-4999, (787) 792-4077 (fax) or email: nts@prtc.net