Most Americans take the abundance of clean and safe drinking water pouring from their taps for granted. They’re unaware the Earth’s water supply will never grow and that the water we drink now has been recycled by nature innumerable times already. Even more critical, most people are unaware that the men and women behind the infrastructure created to sustain such a pressing demand for clean water are often civil engineers. 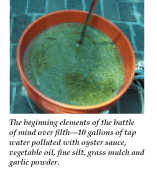 As a direct response to the imperative need for civil engineering students to study and understand water infrastructure, the American Society of Civil Engineers (ASCE) developed the Water Treatment Competition as a feature event of the first ever National Student Conference as part of its 150th anniversary. The conference was held June 21-24 on the University of Wisconsin-Madison campus. Over 1,000 civil engineering students from all over the nation, as well as Canada, Japan, Mexico and Turkey, participated in the conference to network with the civil engineering community as well as to demonstrate their skills. Specifically, the Water Treatment Competition challenged students to use their ingenuity to design, build and operate a system to treat contaminated water within a limited time period. 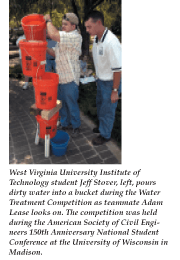 It’s a dirty job…
The students participating in the Water Treatment Competition were given 10 gallons of tap water from the city of Madison, polluted with the likes of oyster sauce, rock salt, vegetable oil, athletic socks, molasses, fine silt, grass mulch and garlic powder—and were able to use only everyday household items to transform the concoction to potable drinking water. Acceptable kitchen items to accomplish this feat included colanders, pots, cheese cloth and coffee filters. All of the utensils used had to fit totally inside of three, five-gallon buckets with the top firmly attached on each bucket.

The object of the competition was to make economical use of material while maintaining a high level of treatment using limited resources. Points were awarded for efficiency and the ability of the system to produce treated water approaching U.S. Environmental Protection Agency (USEPA) standards, established by the National Pollution Discharge Elimination System (NPDES), for wastewater effluent. In addition, points were awarded for a technical presentation detailing the design, operation and capability of the system. The ultimate goal of the teams was to discharge as much effluent as possible, as quickly as possible, with at least enough effluent to fill a half-gallon collection container.

First place
The students who took first place in the competition were Lucas Bryant, Steven Butler, Jeremy Carr, Adam Lease, Jeff Stover and Matthew Tilley of West Virginia University Institute of Technology. The team prepared for 10 hours a day for three days leading up to the competition, mostly by experimenting with different kitchen utensils they were allowed to use. Prof. Lesley Rosier, West Virginia’s faculty advisor and co-chair of the conference, said, “These students present the best and brightest of the future of civil engineering. Through their hard work and determination, and more than a little bit of imagination, this team was able to demonstrate the skills that will prove essential for water infrastructure in our future.”

Jennifer Lewis, Dave Mogge and Erik Pitoniak, of the University of Florida, placed second in the competition under the team name “The Wastewater Wizards.” After consulting with the university’s environmental engineers, their strategy consisted of progressively finer strainers, with a multiple media filter ladened with Grape Nuts™ cereal to catch the oil, a cotton cloth to catch the silt, and a coffee filter to catch anything else. They used a weir to allow the water to flow over the top and let particulate settle at the top. As a final step, the team then added bleach to disinfect the water. “This was an amazing competition. It was exciting to put the knowledge I’ve gained from my classes to practical use,” said Lewis.

Rice and beans
In third place came Jeff Lambert, Billy Ostroff and Lyle Stone, of California Polytechnic State University. The students nicknamed their team “Captain Planet and the Planeteers.” Their strategy was comprised of a system of filters that progressively grew smaller. They began with a web of wooden skewers and a series of two common kitchen strainers, which were followed by a custom-designed dual media filter with a top layer of rice and a bottom layer of beans. The team also prepared for the competition by speaking with  environmental engineers on their campus including the wastewater treatment team.

Stone has enlisted in the U.S. Peace Corps as a requirement of his master’s program in civil engineering at Michigan Technology University. He serves as a positive example of how civil engineering ingenuity is essential to the future of water infrastructure all over the world. “This is a good step toward learning about water treatment, and a great lesson about making due with what you have. I have no doubt that I’ll use these skills in the Peace Corps,” Stone said.

Conclusion
Though health-based violations of federal drinking water standards have been on the decline, non-point source pollution remains the most significant threat to water quality. In addition to the continuing efforts to reduce pollutants in our drinking water, the heightened awareness of infrastructure-related security issues demands that civil engineers be prepared to also develop solutions in the event that the nation’s drinking supply becomes contaminated or depleted (see Newsreel this issue).

About the author
Lindsay Keller is a communications coordinator with the American Society of Civil Engineers (ASCE), which represents more than 125,000 civil engineers worldwide and is America’s oldest national engineering society. Founded in 1852, it’s 150 years old this year. A member of the State University of New York at Oswego’s class of 2000, Keller has been with ASCE’s communications department in Washington, D.C., since graduation, and has worked on national and local campaigns for the civil engineering community and ASCE’s members worldwide. She can be reached at (202) 789-2200 or email: lkeller@asce.org