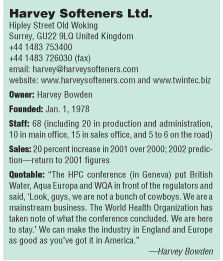 Life is funny. Behind every successful business venture is an anecdote worth cherishing like a family heirloom.

When Harvey Bowden and his wife were first married, she spent her first month’s salary as a buyer for a refrigeration company on something she couldn’t live without — a water softener. After moving to Surrey from southern England, she missed the taste of soft water. Since Harvey was a self-employed plumber, she knew he could easily install it. His reaction?

‘Extravagant’ tastes
“I thought she was crazy and wildly extravagant, and I reluctantly installed the machine, “ he says. After experiencing the soft water himself, he quickly reversed course. “I was astonished at how good it was and I talked to my friends about it, but no one else had even heard of a water softener,” he said. That was 1975. Twenty-seven years later, water softening has become his life. Bowden owns Harvey Water Softeners Ltd., of Surrey, England, where all he sells is, you guessed it, water softeners.

The Bowden household water softener was made by Permutit. At the time, the company was seeking to hire installers for its softeners. (Back then, Permutit would sell the softener to the customer and then recommend a professional, often a plumber, to install the unit.) Bowden says, “Because they knew I had one, they started to ask me to install them.”

Going all the way
Instead of settling for the installation side of things, he decided to begin selling the softeners himself in May 1977. Later in autumn, he gave up the central heating business to concentrate solely on softeners. On Jan. 1, 1978, Harvey Softeners was born.

With a staff of 68, Bowden boasts over 100,000 national accounts and 95 percent of his business is residential and centers around domestic block salt softeners to combat the local 20 grain hardness of water.

In 1978, Bowden ran into a snag with his bread-and-butter product. Permutit softeners were too tall to fit under the household sink. He brainstormed for a solution to his problem. Flummoxed, he turned to an associate.

Introduction to WQA
“He told me that the only place to find components was in America. There was to be an exhibition organized by the Water Quality Association. I found the telephone number and I called from England mid-day because I didn’t know what time it was in America so I figured if I picked the middle, it will be either early in the morning or evening,” the 53-year-old Bowden recalls. “The phone was answered by a fellow named Doug Oberhamer (WQA’s executive director before Peter Censky) and he reassured me that I would be welcome if I came to the 1979 WQA convention in Anaheim, Calif. He was very helpful. The WQA has been a source of a huge amount of information for me over the years. They continue to help, especially with the international regulations work we are doing.

As he walked the floor, Bowden ran into Bill Clack, of Clack Co. The latter took one look at Bowden’s twin-cylinder softener design and asked incredulously, “Why do you want to re-invent the wheel?” Clack added that Kinetico Inc. had already made an undersink softener. The following year, Bowden approached Kinetico and asked, “Could you modify your design?” Talks progressed from there and Bowden subsequently designed a smaller version of the company’s water softener—while incorporating its valve—which was launched in England on Sept. 1, 1981. It was called the Mini-Kinetic.

And so began a very fruitful relationship between Bowden and Kinetico. By 1983, the new softener had overtaken Permutit’s model. Two years later, Permutit was out of business. In 1987, Bowden says, “I made so much money, I semi-retired and raised my three sons.” He concedes that a large softener rental base afforded such a luxury. As he temporarily departed the industry, Harvey Softeners sold off a lot of products—including some commercial/industrial accounts—and retained only Kinetico products. As a result, the business changed its name to Kinetico Ltd. 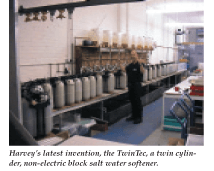 Working behind the scenes
This isn’t to say that Bowden sat on the sidelines and counted his money. In the late ’80s, he set out to design a “block salt softener using a brick of salt.” Akzo Nobel, Europe’s largest chemical company at the time, worked to develop the block from 1987 to 1994. Finally, in 1994, production began and the Kinetico block salt softener was launched a year later.

Then, in May 2001, Bowden did something that would ultimately change the course of his business — one way or the other. He broke away from Kinetico and became an independent dealer. Last year, he expanded his current office as a means to make way for a new production facility. Room was needed as Bowden’s new TwinTec softener induced the rental of the building next door. He went public with it on May 11, 2001.

“After the block salt softener and no longer able to improve on the valve design, we went back to a clean sheet of paper, and completely re-designed a water softener from the ground up,” he explains.

On his own
The transition from Kinetico to being an independent dealer has skewed his sales numbers for this year but Bowden remains optimistic: “Kinetico now competes against me. It’s pretty tough. We lost 97 percent of our business during the first week. It was very frightening at the time because we didn’t know what Kinetico would do. All my dealers who had been selling Kinetico for 20 years could go to them for the product. Meanwhile, I had to come back to the market with an unknown product. I’ve had to spend a lot of time and effort winning back my dealers.”

Things are looking up, however. According to Bowden, 80 percent of his lost business has been recouped. His prediction for this year is to return to 2001 figures, when he enjoyed a 20 percent increase of revenues from the prior year.

Land of softeners
In a country where its residents have a relatively high opinion of its water, softeners rule because hardness seems to be the only overriding issue. “Up until 20 years ago, British water was considered the best in the world, at least the British thought so,” Bowden jokes. “There is very little demand for reverse osmosis and carbon filtration. When you sell an RO, customers frequently complain that the taste is worse (than before).”

He continues, “In England, there’s just one pipe and a little hardness. There’s no iron, sulfur, rotten egg smell, nothing.” What he means by “one pipe” is that England has no small community water suppliers per se, and only about seven water utilities exist and all are connected to the same pipeline. About two percent of English residents are dependent on well water. Most of the country’s hard water is located in the southeast while other regions such as Scotland and Wales have softer water. Furthermore, Bowden estimates, 98 percent of Surrey’s 380,000 households don’t have a softener.

Logistics and leaflets have been keys to Bowden’s sustainability. First, Surrey is located just 30 miles southwest of London. He says, “I can reach over 30 million people within two hours from my car.” And that equals a third of the English market. Second, Bowden says he owes a great deal to the idea of leaflets, or flyers, especially as he was getting started in the business.

‘Tale of two terrors’
“I printed a thousand leaflets called the ‘Tale of Two Terrors,’ which discussed the concepts of ‘scale’ and ‘scum,’” he explains. “I had advertised in the paper and gotten nothing. So I began putting these leaflets in mailboxes. There’s no law in England that prevents anyone from walking up to a house and putting something in a mailbox. We grew to a point where we were doing 11 million leaflets a year. That leaflet built the business for the first 10 years.”

He still uses leaflets as his mainstay avenue of promotion. In a brief moment of levity, he says, “I owe my life to scale and scum.”

Conclusion
Much like his views on previously designed water softeners, Bowden sees the industry much the same way: “It’s a white sheet of paper. It’s whatever you want to make of it.” As for the future of Harvey Softeners Ltd., Bowden has learned to smell the roses in the twilight of his career. He says, “I set out 20 years ago to sell 100,000 softeners a year. I have reached all my other life’s ambitions. This is the only one left. If I don’t do it myself, my sons will do it for me.” From a mother’s request to a father’s legacy, the younger Bowdens look to keep the water softener market alive and kicking in England.