Ageneration ago, ion exchange water softeners were the core of most water treatment dealers’ business. Back then, before distillation and reverse osmosis (RO) units became more popular household solutions, the genesis of drinking water filters and when bottled water hadn’t yet gained wide market acceptance, the good old water conditioner was the backbone. 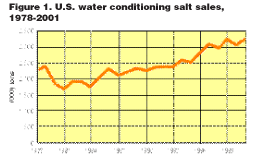 An unlikely development, you might conclude, is the near doubling in use of water conditioning salt. In the past 20 years, softener efficiency has doubled, only half as much salt is needed. Demand regeneration has become the standard, halving yet again the amount of salt consumed per unit. Plus, some systems now regenerate with potassium chloride, though this isn’t a significant diversion from salt sales. With these factors, you’d think water conditioning salt sales should be some 20-25 percent of the 1.7 million tons in the late ’70s or in the range of 350,000 to 425,000 tons, not the 3.3 million tons actually sold.

Clearly, there’s some good news buried somewhere in the data. 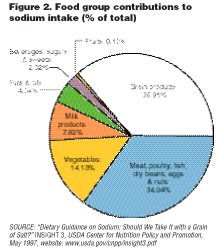 Higher efficiency
Softener salt efficiency has moved ahead sharply. When California set the efficiency standard at 2,850 gpg, the Water Quality Association (WQA) Gold Seal Program was testing at 2,750 gpg. In 1989, WQA revised the Gold Seal testing to reflect industry developments in salt efficient regeneration. Henceforth, tests would be at 3,350 gpg. In the late ’90s, California enacted legislation further raising the minimum allowable efficiency to the WQA standard 3,350 beginning in 2000 and included a technology-forcing requirement that all softener units sold in California beginning Jan. 1, 2003, be rated at 4,000 gpg efficiency. That’s less than six months away.

Moreover, the California statute requires all new water softeners to be “DIR” units—incorporating demand-initiated regeneration technology. WQA technical director Joe Harrison notes that the popularity of DIR units has been accelerating since the mid- to late-’80s and estimates that demand regeneration “cut the salt use of the average household water softener in half.”

Consumers like increased salt efficiency; it saves them money. It also saves them time and trouble making sure their brine tank has enough salt. It helps the environment by reducing the total dissolved solids (TDS) loading in the regeneration cycle.

Practical investment
Consumers are able to afford the investment in a softener as a preventive measure to extend the useful life of their home’s plumbing and stretching the number of years before they’ll need to buy a new water heater, washing machine or dishwasher. While the investment decision has always made good “dollars and sense,” the past 20 years have seen a 240 percent increase in personal consumption expenditures by the American public, from just over $2 trillion in 1982 to more than $7 trillion in 2001.

The short-term economic news suggests Americans are rebounding from the recent recession—at least at the time this was written. In any case, while there are always doomsayers, short-sellers and gold-hoarders, public optimism about the future of the economy is on the rise and long-term productivity in the American economy suggests customers will have sufficient disposable income to keep their home water softened. Other consumer attitude and behavior surveys that suggest Americans want more self-pampering, not less. So, whether softened water is saving their plumbing or not, it makes their hair shiny and their skin soft. Consumers are all primed to hear the benefits of softened water.

Dietary sodium
In addition, consumers are less worried now about consuming sodium in their drinking water than they were 20 years ago—and for good reason. Twenty years ago, Time magazine had a cover story on the dangers of dietary salt. That’s ancient history. Important research began to be published in 1988 and a steady flow of “good news” stories continues to the present—interrupted by an occasional, desperate counterattack by anti-salt advocates as they cover their retreat. We know now that only a minority of the population is salt-sensitive, that dietary imbalances rather than sodium intake levels are the key to blood pressure responses. Overall, populations that might be able to cut salt intake by half or two-thirds might expect only a negligible blood pressure benefit. Plus, 20 years of sustained “public education” has proved, contrary to expectations, that Americans’ salt intakes are still at the same levels they’ve been for the past century.

Most of all, consumers have less to fear about dietary sodium because public health policy-makers finally are asking the right question—“What is the health benefit of different levels of sodium intake?” and not “What is the impact of sodium on blood pressure?” It turns out there’s no health

benefit in reducing the current sodium intake levels of the average American. Of the eight studies of health outcomes of sodium reduction, two were able to identify a health benefit in the subset of older males, but three were able to identify much stronger patterns of increased risk for the entire population in groups consuming the lowest amounts of dietary sodium (see Table 2).

This spring, the Food and Nutrition Board of the National Academy of Sciences’ Institute of Medicine began a two-year project to revisit its dietary guidance for sodium, potassium and water. The outcome of this project has vast potential to bring the science up-to-date and solidify the new insights that better quality diets can enhance public health and that, as a part of such quality diets, dietary sodium hardly matters.

So, we can expect consumers to continue as they have in the past decade, paying less and less attention to dietary sodium generally and virtually ignoring that “hot button” issue of the early-’80s—sodium in drinking water. Healthy water today has less to do with sodium and far more to do with real or imagined pathogenic bacteria or other contaminants.

Conclusion
Water treatment dealers know consumers don’t find aesthetic questions as “sexy” as answering questions about the health of their drinking water. There’s real money in system solutions to meet their customers’ concerns for safe drinking water, no doubt. The filters and membranes of these systems, however, work better and last longer when a softener first conditions the water. So many dealers package their drinking water systems with a softener as a pre-treatment device that, incidentally, delivers a number of other cost-effective benefits. It works!