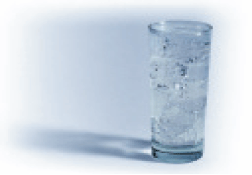 The initial criteria for identifying contaminants for the CCL were based on whether or not the contaminant adversely affected public health and whether it’s known or suspected to occur in public water systems at exposures potentially harmful to public health. Initially 391 contaminants, including 25 microorganisms, were listed as potential drinking water concerns. Limited resources and practical evaluation required that this list be reduced to more manageable numbers. Even when contaminants are recognized as waterborne and a public health threat, they may be difficult to regulate due to the lack of sensitive methods for their detection, information as to their harmful dose levels, and many other factors.

The first CCL
More than 80 inorganic and organic chemicals, radionuclides and microbes are regulated under the SDWA, originally enacted in 1974 and amended in 1984 and 1996. The 1996 amendments require that at least five contaminants be chosen from the CCL every five years for regulatory consideration. Currently, 10 microbes and 50 chemicals or classes of chemicals are listed on the CCL. Among this list, contaminants are classified as “Regulatory,” “Research” and “Occurrence Priorities” (see Table 1). More data are needed for contaminants listed in the occurrence and research priorities before regulatory decisions can be made. Information on health impact, treatment options and analytical methods are needed for those listed under “Research Priorities,” while occurrence data are lacking for those on the “Occurrence” list. 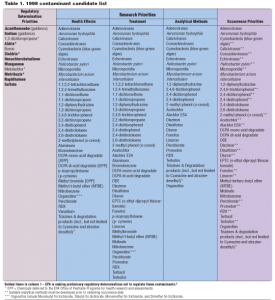 Although Table 1 lists all of the 1998 Candidate Contaminant List items, the USEPA recently proposed to eliminate nine items from regulatory consideration (see bolded text in column one of Table 1). Current data indicates that these nine items do not meet the requirements for contaminant regulation under the SDWA. The agency is soliciting public comment now on this decision (see www.epa.gov/safewater/ccl/pdf/prelimreg_fr.pdf).2

The first CCL — a first draft of which was released in 1997 — was an unranked list. With tens of thousands of potential candidates, choosing which contaminants of drinking water should be top priority for regulatory consideration isn’t a simple process. In addition, the regulatory process isn’t rapid, in part because a cost/benefit and risk management analysis must be performed so that the practicality, and relative need, of a new regulation can be assessed. In 1998, at the request of the USEPA Office of Ground Water and Drinking Water, the National Research Council’s (NRC) Water Science and Technology Board and Board on Environmental Studies and Toxicology oversaw the formation of the Committee on Drinking Water Contaminants. The NRC committee’s primary function was to provide advice on setting priorities for drinking water contaminants that would identify contaminants posing the greatest threat to public health.

Building on the first two reports, the third NRC report recommends a two-step process for developing future CCLs. In this process, a “universe” of drinking water contaminants is established including naturally occurring substances, water-associated microbes, chemicals, products of environmentally transformed chemicals, reaction by-products, metabolites in the environment, radionuclides, biological toxins and fibers. This broad list of contaminants is then reduced to a preliminary CCL (PCCL) based on whether they are known or thought to be a health risk, and are known or thought to occur in drinking water. Each PCCL is then assessed using a classification tool and expert judgment to create the CCL. The expert judgment is important because occurrence and health effects data may not be known, even for some of the most harmful contaminants. These contaminants shouldn’t be overlooked due to a lack of information. The CCL selection process should be repeated for each list development cycle to consider any new information that may have become available since the last CCL was finalized.

Problems with 1998 CCL
Time constraints of the SDWA’s 1996 amendments forced the USEPA to quickly form the 1998 CCL. The Committee on Drinking Water Contaminants commented in their third report that these time constraints resulted in a lack of sufficient explanation and justification for the contents of the list.

Some of the specific concerns of the committee were:

The USEPA was forthright in admitting there was a need to improve the process for the development of the next CCL in 2003.6

Suggested improvements
The NRC committee recommended, as a starting point, five attributes that could be numerically valued and used to score specific contaminants. Scores are based on an assessment of the severity (what are the health effects?), potency (what is the dose response relationship?), prevalence (how often does it occur in drinking water?), magnitude (is the level high enough to be harmful?), and persistence-mobility (solubility, stability, chance of growth or amplification in water) of each contaminant. Using a complex classification modeling process, attribute scores can be used — allowing for predicted values where data gaps occur—to prioritize PCCL contaminants toward a working CCL. This approach allows for a more objective, consistent approach to evaluate all potential drinking water pollutants.

New approaches are needed to evaluate the harmful potential of microbes. The NRC committee suggested a method similar to that used for evaluation of chemicals. Quantitative structure activity relationships (QSARs) have been used for chemicals where the structures of new chemicals are compared to known chemical toxins, in an attempt to predict the new chemical’s toxicity factor. Similarly, the virulence factor activity relationship (VFAR)—the relationship between a known or potential microorganism and its real or potential ability to cause adverse health effects—is suggested as a means of identifying microbial contaminants of drinking water.

The increasing advances in molecular methodologies have aided in the development of a genetic database of microbial pathogens. Genetic detection methods can help to identify the potential threat of a microbe since specific structural and biochemical characteristics (i.e., lipid structures, toxin production, surface proteins, attachment and invasion structures, etc.) are more likely associated with the ability of the organism to be harmful.

Other improvements suggested by the NRC committee to the USEPA included the need to recognize sensitive populations relative to drinking water contaminants. In the past, regulators have recognized that they must consider all consumers, including susceptible populations that are most affected by drinking water pollutants. Highly vulnerable populations include the very young, the elderly, the immunocompromised, the chronically ill, etc. Up to 20 percent of the U.S. population, a significant portion, is considered immunocompromised. The current SDWA legally mandates consideration of vulnerable subpopulations; however, the Committee on Drinking Water Contaminants recommends the category of susceptible populations be expanded to include women of child-bearing age, unborn fetuses, persons genetically predisposed to adverse reactions, the malnourished, and persons with individual sensitivities to specific contaminants.

Conclusion
Ultimately, it’s the responsibility and task of the USEPA to decide which contaminants should be included on the 2003 CCL. The USEPA has called on the experience and knowledge of many experts to help formulate a better process, than were available in the past, to accomplish this goal. Recognizing that no single list will include all contaminants in need of regulation and/or research, and experts will never completely agree on what contaminants should be included or how they should be prioritized, the effort to improve drinking water quality is continuing in a forward direction.

*All three NRC reports are available to purchase or read online at http://www.nap.edu.