Summary: Many water treatment dealers in rural areas may find 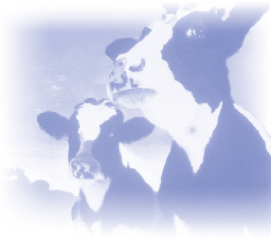 themselves working with livestock operations, whether that’s in helping them deal with animal waste or in treating feed water with chlorine injectors to improve consumption and the general health of the animals.

The 1998 National Water Quality Inventory surveyed 32 percent of the nation’s waters and reported that 40 percent were considered impaired. Of the impaired waters, 60 percent of rivers and streams and 30 percent of lakes were identified as being negatively impacted by agricultural sources.1 Animal feeding operations (AFOs) have emerged as a major potential source of water pollution with a primary focus on excessive nutrients, especially nitrogen and phosphorus. Human pathogens present in manure, however, are also exposed to the surrounding environment and may negatively impact groundwater or surface waters that serve as drinking, recreational, shellfish harvesting and irrigation water sources.

Unfortunately, there are many gaps in our knowledge regarding survival and fate of manure-borne pathogens originating from AFOs. This information gap, in part, is driving a multi-agency effort by the U.S. Department of Agriculture (USDA) and the U.S. Environmental Protection Agency (USEPA) to develop strategies for the reduction of pathogens in manure and manure management systems. This article provides a background on AFOs, including livestock waste and management strategies, manure-borne pathogens and transmission to water, methods for determining pathogen sources, and a brief overview of the USDA-USEPA Unified National Strategy for AFOs.

Manure & management strategies
The USEPA defines AFOs as agricultural enterprises where animals are kept and raised in confined settings.1 Along with animals, large amounts of their waste—an estimated 128 billion pounds generated annually in the United States—are also present within the boundaries of the livestock operations.1 Compounding this problem, the number of U.S. livestock has increased while the number of AFOs has decreased. This intensification of the livestock industry concentrates large amounts of manure within some geographic areas.

Manure-borne pathogens
Bacterial, viral and protozoan pathogens are excreted in the feces of infected animals and may pose a human health threat if they’re transported to waters common for the previously mentioned human uses. Some pathogens associated with waterborne disease that may be present in livestock manure include pathogenic Escherichia coli (including the infamous E. Coli O157:H7), Campylobacter jejuni, Salmonella species, Cryptosporidium parvum and Giardia duodenalis. All of these microorganisms cause diarrhea in infected humans, but some can be fatal in immunocompromised individuals (particularly AIDS and chemotherapy patients, the elderly and children).

Properties that can affect survival and transmission of manure-borne pathogens to water include numbers of animals infected, proximity of AFO to source waters, concentration of pathogens excreted, infectious dose (number of pathogens required to produce disease), and individual pathogen traits that allow survival when exposed to environmental conditions. Some manure-borne pathogens, for example Giardia and Cryptosporidium, are excreted in very high concentrations by young animals, while adults can excrete low numbers for extended periods of time.

For large AFOs, where many animals and their waste are kept within a limited geographic location, the low excretion of pathogens by adult livestock may lead to considerable environmental contamination, including nearby watersheds. Distance from a watershed is also important in transmission of manure-borne pathogens. The ability to be transported to a distant water source may depend on runoff events that can occur seasonally or sporadically throughout the year. It may require more than one of these events to transport the pathogen to a water source. Die off, predation or adsorption to large particles that settle out before reaching the water source can impede pathogen transport. Depending on the infectious dose, numbers ranging from 1 million down to as little as a single infectious unit can cause disease if ingested. Thus, the transport and survival of even very low numbers of some manure-borne pathogens like Campylobacter, E. coli O157:H7 and Crypto-sporidium from an AFO to surface water or groundwater can endanger public and animal health.

Manure-borne pathogens may be able to survive transport simply due to their transport “package,” or transmission method. Association with feces can help protect these pathogens from sunlight inactivation, predation and competition from other microorganisms. Further, individual traits of each pathogen may enhance its survival. For example, studies involving Salmonella species indicate that it’s able to survive up to 12 weeks in slurry-applied soil.4 Long term survival of E. coli has been demonstrated in manure and treated slurry5 and multiplication in water and sediments has also been reported.6 Campylobacter can also survive in surface water and associated sediments.7 The environmentally resistant stages of Giardia (cysts) and Cryptosporidium (oocysts) are excreted in feces, allowing these pathogens to survive harsh conditions, including chlorination applied for drinking water disinfection.

Routes of transmission
Animal manure serves as a vector for the transmission of pathogens that cause enteric illness (diarrhea, vomiting, etc.). Previous studies demonstrated fecal bacterial contamination can occur in streams nearby dairy farms and cattle pastures surface runoff from grazed pastures, springs and wells within the hydrological catchment of pastures, and subsurface runoff from manure-applied fields. Studies also demonstrated rain events can flush manure-borne bacteria through well-structured soils and contaminate shallow groundwater.8 The high numbers of pathogens excreted in AFO livestock feces, combined with the belief that manure can protect pathogens from harsh environmental conditions, increase their potential to reach human water sources by one or more pathways.

Dumping or direct deposition of animal waste into water bodies is one route that pathogens can pollute surface water. AFOs that directly discharge animal waste into waterways, however, are issued permits (by the USEPA) that require the AFO to implement national effluent guidelines. Designated uses of the wastes, water quality criteria to protect these uses and an anti-degradation policy are included in these guidelines.

Polluted runoff is probably one of the most important sources of water pollution, according to the 1998 Clean Water Action Plan (CWAP).9 Rain or other events that produce runoff from fecally contaminated sites, such as manure applied on fields, animal pens and other manure management sites, may actively transport pathogens to groundwater and surface waters critical to a variety of human uses. Irrigation water contaminated with animal manure may increase pathogen transmission to susceptible individuals (animals and humans) if the irrigated crops are minimally processed before consumption. Another potential route is the natural (wind) transportation of pathogen-containing water droplets or dust particles from waste storage areas, animal pens or effluent application through sprinkler irrigation systems (see Redefining the Source…). 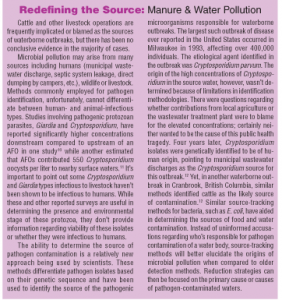 Eliminating information gaps
Under the 1998 CWAP, a unified national strategy was developed between the USDA and the USEPA.9 The “USDA-EPA Unified National Strategy for Animal Feeding Operations” is designed to minimize water quality and human health impacts caused by AFOs, while sustaining U.S. livestock production. Activities developed between the USDA and USEPA include coordinated research projects, technology transfer activities, technical innovation, compliance assistance and establishment of a single point information center.

Examples of research to be carried out by microbiologists working for the scientific research branch of the USDA, Agricultural Research Service (USDA-ARS), includes determination of:

This research and other coordinated efforts will enable the scientific evaluation of the impact that AFOs have on water quality and development of strategies to reduce or eliminate pathogens and other contaminants in water. These activities also will provide invaluable information to assist regulatory authorities in protecting water quality and public health. For more information on the USDA/EPA Unified Strategy, see http://cfpub.epa.gov/npdes/home.cfm? program_id=7

Conclusion
Animal feeding operations amass large concentrations of animal waste within a confined area. Animal waste that contains nutrient overloads and human pathogens can reach water by direct deposition, runoff events or wind. Still, evidence of the transport and fate of viable and manure-borne human pathogens is lacking in scientific literature. Recognizing potential human risks from manure-borne pathogens, the USDA and USEPA developed a “Unified National Strategy for Animal Feeding Operations.” This coordinated effort will enable the scientific evaluation of the impact that AFOs have on water quality and the development of strategies to reduce or eliminate pathogens and other contaminants in water.

About the author
Dr. Jeanette Thurston-Enriquez is a microbiologist with the USDA-ARS Soil and Water Conservation Research Unit and Adjunct Assistant Professor at the University of Nebraska.  Her current research projects include determining the occurrence and dissemination of manure-borne zoonotic pathogens from animal feeding operations, Cryptosporidium removal from river water during bank infiltration, and development of sensitive and rapid methods for the detection of environmentally transmitted pathogens. She can be reached at (402) 472-8935, (402) 472-0516 (fax) or email: jthursto@unlnotes.unl.edu