Where the Grass is Always Evergreen — Cascade Quality Water Center of Wenatchee, Wash. 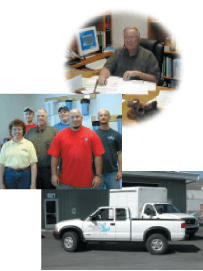 Centrally located in the state known for its apple orchards, George Ising has a luxury that many water treatment dealers wish they could share — he has a large customer base without a glut of competitors. Ising is the owner of Cascade Quality Water Center, of Wenatchee, Wash., a predominantly residential water treatment business that opened its doors in 1987.

While the local agricultural economy may be shriveling under drought, layoffs and plant closings, he is riding a tide of optimism that’s expected to last at least throughout this year. “We’ve been bursting at the seams,” Ising says. Expansion is certainly in Cascade’s future and Ising has his eye on a new building across the street from his current facility. He can see the company moving there within the next two years.

Farming it out
Because of Wenatchee’s remote location just east of the Cascade Mountain range, the business services 250,000 people in four counties — Chelan, which includes Wenatchee; Douglas; Grant, and Okanagon. Ising says calls are made at homes up to 125 miles away. In all, Cascade retains about 2,000 customer accounts. To relieve some of the pressure from the home office, two sub-offices exist in Omak and Moses Lake, each about 75 miles from the Wenatchee location. 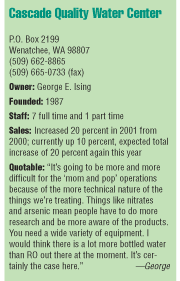 Cascade is an 80-85 percent residential-based business, as the area isn’t a hotbed for commercial/industrial applications. Greater Wenatchee — with a population of about 50,000 — is mainly agricultural and, in particular, timber. Much of that industry has been “wiped out” recently due to the economy, says Ising. One of the more lucrative staples of this part of the country, apples, has also fallen on hard times. Ising, 58, reports that several packing plants have shut down for good while two other large ones are in receivership.

Outsourcing the water
Last August, a local water development occurred that made Ising re-think the philosophy on the direction of his business. Previously, Wenatchee was known to have hard water (20 grain on average to be exact) and local officials decided to remedy this by tapping into nearby lake and mountain stream water sources. To help matters, an aquifer was found near the Columbia River that was only 4 grain hardness with a total dissolved solids count of 100. As soon as this plan was implemented, hardness fell dramatically to 4 grain in Wenatchee and zero hardness in three other towns, according to Ising.

So how did this affect his business? For one thing, water softener sales and drinking water systems both experienced a sharp drop in sales. Add to this the fact that many people have individual wells and it was clear to see why Ising re-evaluated his business strategy. His solution was to diversify and step up his efforts in a revenue source that had always been healthy — bottled water delivery. Now, he says, bottled water makes up for “about 50 percent of our business.” The local decision to tap other drinking water sources hasn’t affected his customers’ desire for bottled water.

“We’re not doing a lot of anything, but a little bit of everything,” Ising says. “Customers can sometimes resent the fact that they have to get a water softener for municipal water. With bottled water, that’s something they want. So it’s a different attitude by the customer.”

In addition to delivering 5-gallon water bottles (the first local company to do so, says Ising), Cascade rents water coolers to its customers. Ising says one water store, owned by another company, exists in the four-county area and “it’s not doing well.”

Keeping an eye out
Cascade uses equipment from Fleck controls, Water Tech Industries, Alamo Water Refiners and DuPage. “We are constantly evaluating new products and new suppliers,” Ising says. The latest development, he says, is the collaboration of the state’s Environmental Protection Agency, the local state departments of ecology and health, and Cascade in bringing viable arsenic reduction test equipment to the area.

Nitrate problems also exist due to fertilizer usage and many units are being installed in agricultural applications. Cascade uses ultraviolet light because of surface water being utilized as a drinking water source. Trojan and Pura are UV companies approached by Cascade. For individual wells, hardness, sulfur and iron are the main water problems. At high elevations, low pH is an issue. According to Ising, Cascade is the only local water treatment business that tests customers’ water. He adds, “We won’t take on a well unless we test it first.”

Why he does it
Ising describes the allure of a job that offers so many challenges. “Part of it is the area and part of it is that I have always enjoyed working with problem water. It gives you the opportunity to stretch out a little bit and do something for people who really need help (with their water),” he says. “We always have prided ourselves on being able to find equipment that matches their problems.”

Meeting customer needs more easily is one of the main reasons why Ising went independent in 1987 after working for a big-name water treatment dealer since 1978. “It opened up some opportunities for us. We found that the calls we received greatly increased. This is before (many franchises) got into bottled water, and we wanted to get into bottled water,” he says. Ising’s father began in the water treatment industry in 1947 with a Livermore, CA, business that carried the same franchise name as his son’s.

Conclusion
As the agricultural side of things flounder in a good part of Washington state, Ising has managed to push the right buttons and keep a positive attitude at the same time. He reasons, “We have tended not to worry about everyone else moaning and groaning about how the market is going, but look at the positive side and keep it going. We’re not into getting depressed over the economy and we’ll still keep growing.” Indeed, he’s already looking at a couple more locations outside of Wenatchee for possible expansion. Needless to say, thousands more potential customers await Cascade and any other business willing to service the locals with quality water treatment.