Summary: Despite studies that have shown ultraviolet light to be very effective in inactivating protozoa and treating a number of other waterborne contaminants, it seems to get overlooked in the popular press. Still, such is increasingly not the case among drinking water plant operators.

In the latter quarter of the 20th century, several hundred European public water supplies incorporated ultraviolet (UV) light disinfection. As of 1987, only one UV drinking water system could be found in the United States—at Ft. Benton, Montana. Today, a number of North American utilities disinfect with UV, and others are installing or considering the installation of UV technology. This recent interest is in part regulation driven, but also due to a new appreciation of both the technology’s benefit to public health, lack of potentially harmful side effects from chemical disinfection and its cost effectiveness.

A need for innovation
The impetus for utilizing UV in Europe was to inactivate bacteria and viruses but avoid the use of chlorine, which is generally regarded unfavorably by Europeans. The U.S. public has been more accepting of chlorine (and chloramines) for drinking water disinfection, but recent studies regarding potential negative health consequences of disinfection by-products (DBPs) have led to a more critical debate in media reports. In the last decade of the 20th century, several circumstances converged to instill an initial curiosity about UV among North American water suppliers. One was the recognition that heavy reliance on chlorine disinfectants could have undesirable negative health effects, due to DBPs such as trihalomethanes (THMs) and halo-acetic acids (HAAs). As chlorine reacts with organic materials prevalent in surface source waters, harmful by-products are formed, including carcinogens and agents of reproductive and developmental disorders. Ozone emerged as a strong candidate for waters prone to chlorine DBPs. However, ozone’s effectiveness against protozoa diminishes in colder waters, and the oxidant can cause DBPs as well—when bromine is present—leading to the formation of bromate unless careful monitoring and pretreatment steps are taken.

Protozoa prevention
In 1993, one event accelerated the drive for better protozoa control. A waterborne outbreak of cryptosporidiosis in Milwaukee affected hundreds of thousands of individuals, a few fatally. That outbreak, along with those in Kitchener, Ontario (1993), and Las Vegas (1994), highlighted the fact that even properly operated filtration plants could allow Cryptosporidium oocysts to pass untreated.

The drinking water industry quickly focused on finding multiple means to deal with Cryptosporidium, even without a regulatory mandate. The 1986 Surface Water Treatment Rule (SWTR) had dealt with Giardia and virus disinfection in utilities with surface water sources (requiring 3- and 4-log—99.9 and 99.99 percent— removal or inactivation, respectively), but did not address Cryptosporidium.

The light fantastic
The search for treatment alternatives was joined by many parties, including the AWWA Research Foundation (AWWARF) and the Electric Power Research Institute (EPRI).  In a joint study of the ability of several innovative technologies to inactivate Cryptosporidium, two unique systems that applied high UV doses to drinking water were noted to be quite effective.2 In a follow-up study of one of these systems, the discovery was made that even quite low doses could achieve several log inactivation of Cryptosporidium.4 Soon after this discovery, UV system manufacturers challenged their equipment with live Cryptosporidium oocysts and demonstrated the technology’s efficacy in actual field trials.1,7 Follow-up studies have verified that UV can achieve significant inactivation of Cryptosporidium at very low doses,11 with 4-log or greater inactivation from exposures as low as 5 to 10 milliJoules per square centimeter5 (mJ/cm2), which is equal to milliWatt seconds per square centimeter (mW-sec/cm2), or roughly the same level as is required for 4-log inactivation of bacteria cells, such as E. coli.

The first hint of these successes was circulated among a receptive audience, as the water treatment industry was anxious for new and effective treatment options. In December 1998, the Interim Enhanced Surface Water Treatment Rule (IESWTR) and the Stage 1 Disinfectant/Disinfection By-Products (D-DBP) Rule resulted in conflicting demands to expand the SWTR to include a requirement of 2-log (99 percent) Cryptosporidium removal, while calling for stricter limits on chemical disinfectant byproducts. Even then, with the recognition that certain source waters might require treatment beyond 2-log removal of Cryptospo-ridium to protect public health, the U.S. Environmental Protection Agency (USEPA) was open to hearing more about UV. In April 1999, a two-day workshop was held in Washington, D.C., to gather information on whether the technology might be appropriate for drinking water in the United States. Within a year, California initiated proceedings to expand and update its wastewater UV disinfection guidelines to apply to drinking water,8,9 a task which was completed in December 2000.10

Shining path
Presently, the attractiveness of UV to drinking water utilities has strengthened, due to its inclusion in the USEPA’s “tool box” for compliance with the provisions of the its draft proposal of the Long Term 2 Enhanced Surface Water Treatment Rule (LT2SWTR). When promulgated, this rule will call for additional Cryptosporidium inactivation at facilities where monitoring has indicated elevated concentrations of the pathogen in their source water. In addition, all unfiltered supplies will be required to provide 3-log Cryptosporidium inactivation using at least two disinfectant technologies.

A factor that makes UV technology even more compelling is economics. According to a recent study prepared for the USEPA, UV is quite cost effective relative to ozone.6 The application of 40 mJ/cm2, which is in excess of the dose needed to achieve 3-log Cryptosporidium inactivation, could be achieved at 40 percent of the cost of 2-log inactivation by ozone, or 80 percent less than for an ozone system providing only 1-log (90 percent) inactivation. This cost advantage (the assessment combined capital and operating costs) was found to apply across the range of system sizes analyzed, from 0.02 million gallons per day (mgd) to 1,000 mgd. Diminishing this cost effectiveness somewhat may be the U.S. patent awarded to Calgon Carbon Corporation (CCC) in 2000, and a parallel Canadian patent in 2001, for the application of continuous wave UV for the purpose of Cryptosporidium inactivation. According to the company,12 a franchise fee of $0.015 per every 1,000 gallons treated would be exacted from the water supplier, regardless of the manufacturer of the UV equipment. Also, it should be noted that, as UV disinfection is a physical process, no residual is present downstream of the treatment reactor. Therefore, to protect the distribution system from microbial regrowth, some secondary chemical disinfectant would still be necessary. 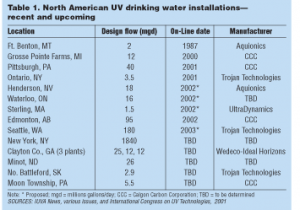 Ft. Benton now is not alone in North America in its reliance on UV. A number of utilities have installed UV, and others are planning or contemplating its use, as a primary disinfectant or as one of several barriers to pathogens. Table 1 lists these planned and existing installations, which range in size from 2 to 1,800 mgd. That’s 1.8 billion gallons per day!

About the author
Tom Hargy is senior scientist at Clancy Environmental Consultants of St. Albans, Vt., which provides analytical and research and development services to the drinking water, wastewater and high purity water industries. A member of the International Ultraviolet Association and American Water Works Association, he’s also on the WC&P Technical Review Committee. Hargy can be reached at (802) 527-2460, (802) 524-3909 (fax) or email: thargy@clancyenv.com