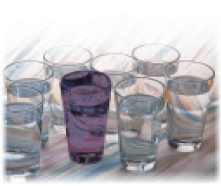 Summary: Sources of water in both developed and less developed countries are susceptible to waterborne contaminants. As research continues, detection methods have become more efficient in making water supplies safer for a wider range of populations.

Many bacterial, viral and protozoan pathogens may be present in the intestines of humans and animals and may impact a water supply in numerous ways including farm run-off, wildlife, agricultural waste, inadequate wastewater treatment, improper waste disposal, septic failure and, very recently, by a deliberate act of bioterrorism. To properly assess the microbiological quality and safety of any water supply, methods must be designed to detect even small numbers of these organisms. This task is especially important for water systems used for drinking, recreation or in the harvesting of seafood. Many of these organisms aren’t readily detectable in the environment by conventional methods as they’re often present in very low numbers. This is further complicated by the fact many have a considerably low infectious dose, which renders even a low prevalence in polluted waters hazardous to human health.

The usual suspects
Traditionally, prediction of the presence of human enteric pathogens in water has been achieved by monitoring for established microbial “indicators” of fecal pollution. There are many flaws in using this technique, however, as recent research has established an inability of many of these indicators to predict the presence of disease-causing viruses— such as Hepatitis A and E, Coxsackie viruses, Echoviruses, Adenoviruses and Norwalk viruses—as well as indigenous bacteria, such as Legionella and Helicobac-ter, not to mention parasites such as Cryptosporidium and Giardia. In addition, all indicators fail to predict the presence of naturally occurring, harmful aquatic organisms, such as toxic algae. Commonly used and alternative microbial indicators and the advantages and disadvantages of their use are listed in Table 1. 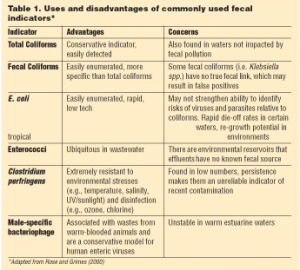 Conventional detection methods are outdated and don’t adequately assess the risk of waterborne disease, water quality or even treatment needs. The need for powerful new tools for the detection of pathogenic organisms in water is greater now than ever, as the potential risks to water supplies appear to be increasing. Specific rapid, sophisticated molecular methodologies are available, but only recently has this technology been applied in the field of water science and technology.

Because many microorganisms aren’t easily cultured or can enter a viable but non-culturable state, current methods focus on immunological or genetic/molecular characteristics to detect the presence of waterborne pathogenic microorganisms. Gene probes are being used that are highly specific and capable of detecting minute amounts of DNA or RNA common to, or conserved, in various pathogens including Salmonella spp. and E. coli O157:H7. In addition, the polymerase chain reaction (PCR) as well as various “DNA fingerprinting” techniques have been used to detect intestinal bacteria and viruses in water and seafood. These genetic techniques usually require the concentration and purification of an organism’s genetic material, followed by genetic analysis by a variety of methods. A summary of available technology for molecular detection and differentiation of microorganisms as well as their limitations is shown in Table 2. 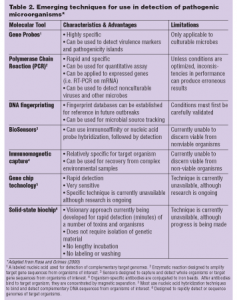 Detection of pathogenic organisms provides information as to the safety and public health risks associated with a given water supply; however, it often does little to define the potential source(s) of the contamination. Recent research has elucidated molecular fingerprints, host-specific genes, and phenotypic characteristics—visible properties of an organism produced by interaction of the genotype and the environment—that are capable of providing direct evidence of source origin. Generally, because different enteric pathogens are present in the intestines of different animals, the identification of a contamination event as being of either human or animal source would provide information as to potential health risks and remediation efforts necessary after a problem has been identified. New technologies for “microbial source tracking” continue to emerge as viable techniques for use in pinpointing specific sources of fecal contamination and their use in risk assessment and development of total maximum daily loads (TMDLs). This has proven invaluable to the regulatory community, industry, and risk managers who must continually conduct these comprehensive evaluations of their water supplies.

These new molecular tools could replace or augment cumbersome, inaccurate and often misleading fecal indicator tests. Change, however, has been slow in coming. Old tools are familiar and comfortable and, as is evident in Table 2, many of these new molecular tools haven’t yet been finely tuned. In addition, a common misconception is use of these methods requires advanced expertise when, in reality, many are much easier to perform than conventional tests. Overall, use of novel technology must be encouraged so techniques can be validated and continue to be used to build a record of success.

Conclusion
Microbiological quality of water systems in both developed and developing countries worldwide continues to decline. Furthermore, emergence of new and more virulent pathogens exacts a significant health risk to susceptible populations such as the young, elderly and immunocompromised. The issue of development, validation and implementation of novel methods to detect harmful microorganisms in water is complicated. Nevertheless, efforts in this field must be focused so the assumption of the availability of safe water by the general public can be fulfilled.

About the authors
Dr. Troy M. Scott is currently a visiting scientist in the Environmental Microbiology Laboratory at the University of South Florida’s College of Marine Science. He received his bachelor’s, master’s and doctoral degrees in environmental and molecular microbiology from the University of Florida. His areas of research include development of novel microbial source tracking methodologies as well as improvement of methods used for detection of pathogenic viruses and protozoa in the environment.