Summary: The following article is a summary of one the author wrote on this topic that will appear in the journal, “Environmental Health Perspectives.” Eight studies are evaluated with few conclusions that can be drawn because of variables. Suggestions for models for future research are made.

Considerable public concern exists regarding the effects of exposure to drinking water contaminants on the health of infants and children. Yet, research on the potential causal relationships between adverse birth outcomes and maternal exposures to chemical contaminants in drinking water is at a very early stage. Nevertheless, studies are feasible since most of the United States maintains databases of tap water samples conducted by water utilities in compliance with federal and state drinking water regulations. In addition, every state maintains birth and fetal death certificate databases containing information on such things as gestational age, birth weight, and parental and infant risk factors. From the data, adverse birth outcomes such as low birth weight, pre-term birth, small for gestational age (SGA), and fetal death can be evaluated. Studies of birth defects require the review of medical records or the availability of data from a population-based birth defects registry. Verification of spontaneous abortions also requires the review of medical records.

The major difficulty in conducting a study of drinking water and adverse birth outcomes is the exposure assessment. Available data usually consist of a small number of tap water samples per year taken at a few points in a town’s distribution system. Therefore, space-time extrapolations are necessary to link tap sample data to maternal residence during pregnancy and the time period of the pregnancy. Some studies have conducted space-time extrapolations by modeling water system characteristics and tap water sample data.1-3 One state has linked data from tap water samples with maps of the public water distribution systems to improve the accuracy of exposure estimates at each residence.4

Many studies don’t conduct interviews to determine maternal residence and water usage (e.g., glasses of tap water consumed and frequency and duration of showering) during pregnancy. These studies use the maternal address at delivery from the birth or fetal death certificate and assume that mothers don’t change their residency during pregnancy; however, it’s estimated that 20-25 percent of mothers change their residence during pregnancy.5,6 Case-control studies usually conduct interviews to determine maternal residential history and water usage during pregnancy. Still, recall errors are possible because these interviews are conducted several months or even years after the child’s birth or miscarriage. So far, only one prospective cohort study has been conducted that obtained maternal water consumption habits in real time during the first trimester.7 Difficulties and errors in exposure assessment likely result in substantial underestimates of risks as well as distorted or attenuated exposure-response trends.

Chlorination DBPs
When chlorine is added to disinfect drinking water, it reacts with residual organic matter in the water to form unwanted disinfection by-products (DBPs). Chief among these DBPs are trihalo-methanes (TTHMs), e.g., chloroform, and haloacetic acids that are teratogenic in animal studies. In 1979, a U.S. maximum contaminant level (MCL) for total trihalomethanes (TTHMs) was set at an annual average of 100 parts per billion (ppb). In 1999, the MCL for TTHM was reduced to 80 ppb. 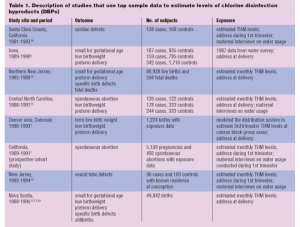 Eight studies of adverse birth outcomes have used THM monitoring data to estimate exposures. The median TTHM levels in these studies tended to be in the 30-50 ppb range, and were similar to levels found in many U.S. surface water systems.8 Table 1 summarizes the characteristics of these studies, four of which conducted interviews to determine maternal residential history and water usage during pregnancy.

In the Iowa9, northern New Jersey10, and Denver1 studies, THMs were associated with increased risks of SGA, narrowly defined as either the 5th percentile weight by gestational week or as low birth weight among term births (see Table 2). The strongest association for SGA (odds ratio = 5.9) was observed in the Denver area study, which modeled the distribution system and presumably had the best exposure assessment.1 Maternal risk factors (e.g., maternal smoking, race/ethnicity, education level, and prenatal care) didn’t confound these associations. The Nova Scotia study11 found only a slight increased risk of SGA, more broadly as the 10th percentile weight by gestational week (odds ratio = 1.08). In general, the studies found very weak effects for low birth weight among all births and no effects for pre-term birth. 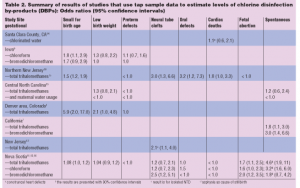 The two studies that evaluated fetal deaths and THM levels had conflicting results. The Nova Scotia study11,16 found an association especially with BDCM levels, which was strengthened when cause of death (asphyxia) was evaluated. On the other hand, the northern New Jersey study found no association between TTHMs and fetal death possibly because it didn’t evaluate individual THM levels or cause of death information. 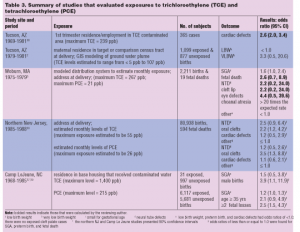 Table 3 summarizes the five studies of adverse birth outcomes and Trichloroethylene (TCE) and/or Tetrachloroethylene (PCE). TCE was associated with increased risks of SGA ranging from 1.5 to 1.9 in the Camp Lejeune Marine Corps Base17 and Woburn, Mass.,3 studies. No association between TCE and SGA was found in the northern New Jersey study, possibly because TCE levels were much lower. When male and female births were evaluated separately in the Camp Lejeune study, the increased risk of SGA was found only among male births exposed to TCE. Increased risk of very low birth weight was associated with TCE levels in the Tucson, Ariz., birthweight study2 but not in the northern New Jersey or Woburn studies. TCE wasn’t associated with pre-term delivery in any of the studies. An association with fetal death was found in the Woburn study but not in the northern New Jersey study—again, possibly due to the lower levels of contamination in the latter study.

Increased risk of cardiac defects was associated with TCE levels in the Tucson cardiac defect study18 but not in the Woburn or northern New Jersey studies; however, in the Woburn study, TCE was associated with a cluster of choanal atresia, a nasal defect related to conotruncal heart defects. Both the Woburn and northern New Jersey studies found associations between TCE and increased risks of NTDs and cleft lip. In addition, the Woburn study found an association with eye defects.

Two studies evaluated PCE levels and SGA. In the northern New Jersey study, PCE wasn’t associated with SGA. In the Camp Lejeune study19, a slightly increased risk of SGA was associated with PCE exposure (odds ratio = 1.2), with virtually all of the effect occurring among mothers 35 years old or older (odds ratio = 2.1) and among mothers with 2 or more prior fetal losses (odds ratio = 2.5). The northern New Jersey study also evaluated PCE exposure and birth defects and fetal deaths. An association was found for oral clefts (odds ratio = 3.54) but not for other birth defects or fetal deaths.

Conclusion
The studies of THMs and adverse birth outcomes provide moderate evidence for associations with small-for-gestational-age infants, neural tube defects and spontaneous abortions. Because fewer studies were conducted for TCE and PCE, evidence for associations is weaker. Nevertheless, the findings of excess NTDs and clefts in the northern New Jersey and Woburn studies should be followed up in future studies. The findings of excess choanal atresia in the Woburn study and excess cardiac defects in the Tucson study warrant follow up as well, because some cardiac defects are etiologically related to choanal atresia. States with population-based birth defects registries should be encouraged to conduct studies of public drinking water contamination. Exposure assessments can be improved by modeling the distribution systems following the examples of the Denver area study, the Tucson birth weight study and the Woburn study.

About the author
Frank Bove is senior epidemiologist for the Agency for Toxic Substances & Disease Registry (ATSDR) at the Centers for Disease Control and Prevention (CDC) in Atlanta. He can be reached at (404) 498-0557, (404) 498-0079 (fax) or email: fbove@cdc.gov