Summary: Drinking water supplies have been made safer over the years by chlorination. With this method, however, come other residuals, most significantly harmful disinfection by-products such as trihalomethanes. One solution to the problem is using activated carbon as discussed here.

Chlorination of drinking water has all but eliminated waterborne diseases such as typhoid fever, cholera and dysentery over large areas of the globe. Proper chlorination kills the majority of bacteria, viruses and parasites responsible for these illnesses. Unfortunately, there are several disinfection by-products (DBPs) from the chlorination of drinking water that pose a possible health risk. Some of these by-products include trihalomethanes (THMs), haloacetic acids (HAAs), bromate and chlorite.

Chloroform, bromoform, dibromo-chloromethane and dichlorobromo-methane are THMs. These are created when the disinfectant (chlorine) used in water treatment reacts with bromide, natural organic matter (decaying vegetation) or man-made organics present in the source water. A U.S. Environmental Protection Agency (USEPA) survey discovered that THMs are present in virtually all chlorinated water supplies.1 For many years, the USEPA required large water systems to reduce total trihalomethane (TTHM) levels in potable water. Now, the USEPA is requiring smaller water systems to reduce TTHM levels as well. While it’s true acute health risks associated with TTHMs are small compared to those for waterborne pathogens, the chronic risks associated with extended exposure are among the most important water quality issues to be addressed among U.S. water suppliers.2

Links to danger
The TTHM health issues are far-reaching with possible links to heart, lung, kidney, liver, central nervous system damage and bladder/colorectal cancer. A 1998 California study3 found a miscarriage rate of 15.7 percent for women who drank five or more glasses of cold water containing more than 75 parts per billion (ppb) TTHMs, compared to a miscarriage rate of 9.5 percent for women with low TTHM exposure.1 For these reasons, TTHM levels in public water supplies are limited to 0.08 parts per million (ppm) or 80 parts per billion (ppb). This figure was lowered from 100 ppb in 1999 (see www.epa.gov/safewater/mdbp/mdbp.html).

There are many options—including chloramine disinfection, reduction of chlorine at the treatment plant, and alternate disinfectants (ozone and UV light)—to reduce TTHMs. Chloramine disinfection does reduce TTHM levels because chloramines do not react with and consume the natural organics in the water. This can result in color problems in drinking water since color comes from tannins and humics derived from decaying plant matter present in water; and chloraminated water is not recommended for aquariums and kidney dialysis. Activated carbon cannot only be used to remove the color and residual chloramines from the water, it can also be used to remove the TTHMs from chlorinated drinking water in the first place.

The following study shows that in chlorinated drinking water, activated carbon can be used to remove TTHMs. The characteristics for optimum carbon performance for TTHM removal are also presented. 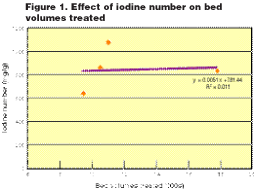 Traditionally, the parameter used when selecting a carbon is the iodine number, which is not very effective at gauging a carbon’s performance at adsorbing trace levels of contaminants. As shown in the data (see Figure 1), no correlation exists between the iodine number and chloroform capacity for a representative sampling of numerous activated carbons.

Given the limitations of the iodine number in trace removal applications, carbon manufacturers are beginning to use new measures to better characterize an activated carbon’s trace adsorption capacity. One new measure, called the trace capacity number, measures a carbon’s capacity to adsorb acetoxime—a more realistic surrogate for low-level contaminant concentrations than iodine. Comparing trace capacity number with chloroform capacity yields a much better correlation than the iodine number (see Figure 2). 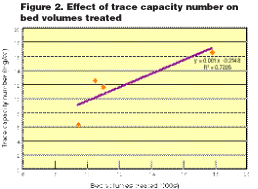 Column tests
To demonstrate the comparison of the iodine number and trace capacity number with respect to TTHM removal, two activated carbons were selected and tested side-by-side in a 1-inch column study. The purpose is to obtain the breakthrough curve under dynamic conditions, which shows how the concentration of the contaminants in the effluent varies with the volume of liquid treated. The rate at which the contaminants are adsorbed by the carbon can only be determined by dynamic column tests. Understanding these kinetics of adsorption allows for proper system design.

The first activated carbon selected was a commercially available bituminous coal-based carbon that had not been optimized for trace capacity. The second carbon selected, also commercially available, was optimized for trace capacity number. Table 1 lists the properties of each carbon tested. Both carbons have similar iodine numbers, but vary with regard to trace capacity number. The water utilized in the column study was tap water containing influent levels of chloroform that averaged 6 ppb, and TTHM levels that averaged 92.8 ppb.

In this study, the activated carbon optimized for trace removal outperformed the standard bituminous carbon in the dynamic test. The trace removal carbon has only breakthrough for chloroform, whereas the bituminous shows chloroform and bromodichloromethane breakthrough. Choosing a carbon with a higher trace capacity number yields improved “real world” performance for TTHM removal, and leads to lower operating costs for the customer resulting from less frequent carbon change-outs (see Table 2).

Other points to consider
As with all applications, other factors also come into play besides adsorption capacity when applying activated carbon for TTHM removal. Kinetic factors, such as surface diffusion, are also important and need to be taken into account when designing a carbon system. For most point-of-entry applications, a 12-×-40-mesh size is most commonly used; contact times in the range of five to seven minutes per bed volume are standard when this particle size is applied. Typically, two beds operating in series are recommended to optimize the utilization of the carbon and ensure that breakthrough is contained. In cases where space limitations exist and pressure drop is not a factor, a 20-×-50-mesh size carbon can be applied using a shorter contact time of two to three minutes, allowing for smaller beds to be used.

Other water characteristics that can impact the life of the activated carbon must also be considered when applying carbon for TTHM removal. Background organics (often measured as total organic carbon or TOC) can competitively adsorb and shorten the bed life of the carbon, and inorganics such as iron can precipitate onto carbon beds and impact carbon performance. Proper monitoring and backwashing of carbon beds is recommended to ensure that the carbon is working effectively and the system is maintained.

Conclusion
While chlorination of drinking water has its benefits, it also has its drawbacks through the formation of disinfection by-products such as TTHMs. Fortunately, water treatment professionals have tools at their disposal to deal with TTHM problems in their water supply. Activated carbon, when properly selected and applied, is one of those tools.

About the author
Kimberly Thompson is an R&D chemist with Calgon Carbon Corp., of Pittsburgh. She has a bachelor’s degree in chemistry from Seton Hill College. She can be reached at (800) 422-7266, (412) 787-6700 or info@calgoncarbon.com