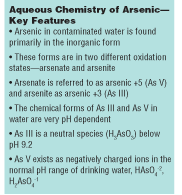 parts per billion (ppb) to 10 ppb. Many community water systems (CWSs) in the United States will now have until Jan. 23, 2006, to implement an economical treatment solution. The effective date of this rule1 was Feb. 22, 2002, and the effective date for purposes of compliance with the new consumer confidence rule reporting requirements for arsenic is the same. The U.S. Environmental Protection Agency (USEPA) estimates that of those CWSs in violation, 97 percent serve less than 10,000 people.

BAT and small systems
In anticipation of the lower MCL, many studies have been conducted in the last few years to evaluate various municipal treatment technologies. These studies have resulted in seven processes being selected by USEPA1 for designation as best available technologies (BATs) for removal of arsenic from drinking water. These include:

It’s significant to note that in order for these listed BATs to be optimally effective, arsenic must be in the +5 oxidation state (As V, pentavalent arsenic or arsenate). If arsenic is present in the +3 oxidation state (As III, trivalent arsenic or arsenite), it must be oxidized to As V utilizing an appropriate oxidant, e.g., free chlorine, permanganate or ozone2. The rule also states that CWSs aren’t required to use BATs to achieve compliance and states: “Any technology that is accepted by the State primacy agency and achieves compliance with the MCL is allowed.”

While these studies have focused principally on the above BAT technologies as applied to centralized municipal processes, some point-of-use (POU) treatment technologies (RO and activated alumina fixed-bed adsorbers) were also evaluated. This is in accordance with the 1996 reauthorization3 of the Safe Drinking Water Act (SDWA) that does allow use of POU and point-of-entry (POE) technologies to meet the arsenic MCL. The POU/POE devices, however, must be under the control of the CWS and it must be demonstrated to the primacy agency that the remedial program provide protection at least as well as centralized treatment. Small system compliance technologies (SSCTs) listed in the rule include undersink RO and activated alumina POU devices. The use of SSCTs vs. centralized BAT will depend on the cost of treatment per household as determined by the authorized technology provider and the primacy agency. Small systems are defined as those serving less than 10,000 people.

Treatment options
As indicated from the aqueous chemistry of arsenic, the oxidation state of arsenic and the pH of the contaminated water must be known before an appropriate removal technology is selected. For instance, RO would best be utilized for As V removal over a wide pH range since the membrane would reject the negatively charged arsenate species (H2AsO4-1 and HAsO4-2). Conversely, As III—which exists as an uncharged species (H3AsO3)—would be poorly rejected since most RO membranes are poor at rejecting neutral molecules. Also, alumina, iron-doped alumina and ion exchange would be more effective for removing As V than As III (for an optimum bed size and flow rate) because the negatively charged species of As V are better complexed and retained by the adsorptive or ion exchange media. Arsenic speciation methods4,5 are available for determining which form(s) of arsenic are present in contaminated water.

Granular ferric hydroxide
A number of different granular adsorptive media were tested in this study for determining the most effective adsorbent for POU applications. Among these were several iron-doped alumina (natural and synthesized), iron-doped activated carbon and a specific form of granular ferric hydroxide. This study revealed that the new adsorbent far outperformed all the other media tested.

Proposed NSF Test Protocol
An arsenic reduction protocol for testing POU drinking water treatment devices is being developed by NSF International for incorporation into ANSI/NSF Standard 53: Drinking Water Treatment Units—Health Effects. Separate protocols are being developed for As V reduction and As III reduction. The proposed test parameters for these protocols are shown in Table 1. 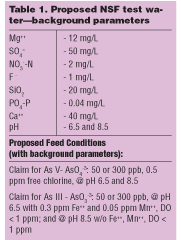 The general background test parameters are based on data from the U.S. Geological Survey’s groundwater survey6 and the 50 ppb arsenic feed concentration represents the 97th-percentile arsenic occurrence level, which means that 50 ppb or less was found in 97 percent of the drinking water samples surveyed.

The proposed As III test conditions simulate groundwater at pH 6.5 with trace levels of soluble iron, manganese and dissolved oxygen (DO). Groundwater at pH 8.5 typically doesn’t have soluble iron and manganese. For a “total” arsenic reduction claim, the proposed standard would require testing for both As V and As III at pH 6.5 and 8.5. Testing at both pHs was necessary because of the potential effect of pH on arsenic adsorption for the various adsorptive media expected to be utilized. Also, testing at an arsenic feed concentration of 300 ppb or greater would be allowed. The 300 ppb concentration represents the level of arsenic found in a majority of the sources above 50 ppb in this survey.

The cartridge configuration chosen for this study is one that could easily be utilized for POU application. It’s a canister-type cartridge designed for an up-flow mode of operation. Table 2 lists the cartridge dimensions and the other operational parameters used in these tests.

Evaluating the results
Figures 1-4 show the results obtained and demonstrate the very efficient performance of the new granular ferric hydroxide adsorbent for removing As V and, somewhat surprisingly, also for As III with an empty bed contact time of only 10.6 seconds. 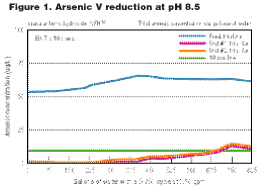 or As V removal at pH 8.5 in Figure 1, gradual breakthrough begins at about 300 gallons and a final breakthrough capacity (@ 10 ppb) is observed at about 700 gallons. Of all the other materials tested in this study, the highest capacity obtained under the same conditions was only 325 gallons. All feed concentrations in this study were targeted at 50 ppb. The feed and effluent samples containing As III were speciated4 to verify that oxidation of As III to As V hadn’t occurred. 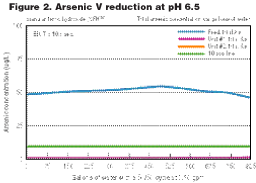 The results in Figure 2 were obtained at pH 6.5 and note that all effluent samples were reported at less than 0.5 ppb As V. The capacity for this small cartridge (400 ml bed volume) at low pH appears to be far in excess of 1,000 gallons. This remarkable efficiency for As V removal by the new granular ferric hydroxide adsorbent at lower pH indicates that for larger scale removal processes, pH adjustment may be an option for achieving very high operating capacities.

Because of operational difficulties maintaining low dissolved oxygen (DO), Fe++ and Mn++ at pH 6.5, As III removal tests weren’t performed exactly to the proposed NSF protocol (low DO and with Fe+2 and Mn+2 at pH 6.5). Under the conditions utilized, however, the adsorbent was very effective for removing As III at both pH 8.5 and 6.5 (see Figures 3&4). The capacity (~1,000 gallons) at pH 8.5 shown in Figure 3 is only slightly less than the capacity obtained at pH 6.5 (~1,150-1,200 gallons in Figure 4). It’s important 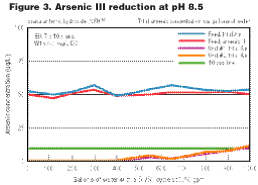 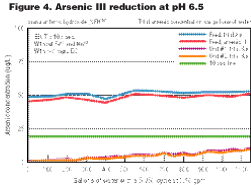 As V than As III at high pH is apparently caused by a more negative surface charge that exerts greater repulsion of the negatively charged H2AsO4-1 and HAsO4-2.

These results show that the new granular ferric hydroxide adsorbent:

The adsorbent’s high affinity for As III is significant since most other media and removal processes reduce As V more efficiently than As III, e.g., RO and ion exchange. These technologies would require pre-oxidation of As III to As V to be effective (e.g., USEPA BAT requirement mentioned above).

Cost considerations
According to the results presented, an affordable undersink POU device with a cartridge similar to the one used in this study containing the adsorbent could provide a reasonable capacity³ (500-1,000 gallons) for arsenic reduction. Such units could consist of a single-housing unit with or without a flow capacity monitor or a two-housing unit without a monitor, depending on the desired claimed capacity. The cost of such devices would fall well within the $150-200 price range mentioned in a recent WC&P article.7

POU drinking water treatment units that utilize this adsorbent can offer small community water systems an economical POU solution to meeting the new USEPA arsenic standard for arsenic contamination up to 50 ppb as allowed by the 1996 Safe Drinking Water Act.

About the author
Gary L. Hatch, Ph.D., is director of research and development for USFilter Consumer & Commercial Water Group, of Sheboygan, Wis. GFH™ (granular ferric hydroxide) is a trademark of Culligan International Corp., of Northbrook, Ill. He is responsible for new product R&D including the development of POU products utilizing the adsorbent described in the article. Hatch graduated from Kansas State University with a doctorate degree in analytical-inorganic chemistry and has been actively involved in water treatment for the past 28 years. He can be reached at (920) 451-9353, (920) 451-9384 (fax), email: ghatch@plymouthwater.com, or website: www.culligan.com or www.usfilter.com