Most of us don’t give a second thought to drinking out of our home taps. Whether our source of water is a private well or a local water treatment facility, we assume that it poses little if any risk to our welfare. The reality is that there is risk. Water treatment plants utilize microbial water quality standards, which are set by the U.S. Environmental Protection Agency (USEPA) and are based on acceptable risk levels. In other words, a certain number of illnesses in the population, which are due to microbes being delivered through the distribution line, are acceptable. The current risk goal for drinking water plants is no more than 1 illness per 10,000 individuals served by the system per year. The key word here is “goal” and thus doesn’t reflect true risk. Those who utilize private wells for their water may have their water analyzed by local public health departments; however, most of these systems aren’t checked on a regular basis, if at all, as private wells aren’t regulated by state and federal drinking water standards.

Assessing risks
While there’s risk from drinking water sources, the populations at highest risk are the young, the old or the immunocompromised. Numerous cases are attributed to storm events where treatment facilities are overwhelmed by highly turbid waters containing microbial pathogens or wells contaminated by the transport of pathogens into the aquifer via recharge (movement of rainwater through soil and into the aquifer). Of the 548 waterborne outbreaks between 1948 and 1994, 51 percent followed precipitation events.1 One means of minimizing risk from our water sources is to install an additional barrier. As this industry understands, many point-of-use (POU) water treatment systems are available for home or office; and, if utilized and maintained as designed, are an effective “firewall” to the occasional pathogenic microbial contaminant. 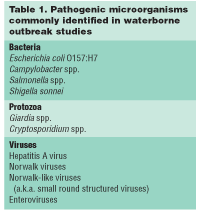 Table 1 lists microorganisms that have been identified as the causative agent in numerous waterborne outbreak investigations. In 40-to-50 percent of the outbreaks that occur each year, the responsible agent is never identified. The organisms that have presented a unique challenge to water treatment facilities are those that are resistant to disinfectants. These disinfectant-resistant organisms typically have one thing in common—they move through the environment from host to host in a cyst or spore stage. The cyst or spore is an egg-like vesicle that protects the organism from physical stresses (desiccation, heat, etc.) that it may encounter outside of its host. 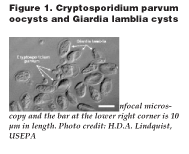 The protozoa Giardia and Cryptosporidium (see Figure 1) are prime examples of disease-causing agents and are identified in drinking water outbreaks each year (25 percent of outbreaks during 1997-8). When annual outbreak statistics are compiled, Giardia is often identified as causing the most waterborne outbreaks or cases of waterborne illness (see www.cdc.gov/epo/mmwr/preview/mmwrhtml/ss4907a1.htm)2 and this is due in part to its resistance, cyst form, and its prevalence in source waters. Although Giardia infections cause few deaths and, in most cases, are responsible for only a self-limiting gastroenteritis, it’s ironic that this organism is ignored by the research funding agencies given its impact on U.S. public health. Cryptosporidium, on the other hand, has received a lion’s share of research funds over the last several years for good reason, as it caused the largest waterborne outbreak in U.S. history when over 400,000 Milwaukee, Wis. residents were infected through the city’s public utility water distribution lines in 1993. The outbreak followed a storm. While most cases of cryptosporidiosis also are self-limiting—an illness that clears without treatment—symptoms such as gastroenteritis are typically severe and infection can be fatal, particularly to the very young and immuno-compromised.

Due to the resistant nature of Giardia cysts and Cryptosporidium oocysts, filtration is the recommended means of preventing these organisms from making it to the tap. Cryptosporidium oocysts are the smaller of the two and range in size from 4-to-8 microns (µm). Those choosing a POU water treatment system for their customers should keep the oocyst spore size and the recommendation of filtration over disinfection in mind when selecting a unit.

E. coli
Many organisms of concern, such as bacteria and viruses, aren’t spore formers yet still account for a number of drinking water outbreaks each year. E. coli O157:H7, which is mostly associated with foodborne outbreaks, has emerged as a concern for the water industry due to the severity of its illness and the fact that infections can be fatal. The groups at highest risk are the elderly and children under 5 years of age. Approximately 2-to-7 percent of outbreak cases lead to hemolytic uremic syndrome (the breakdown of red blood cells) and, even with intensive care, 3-5 percent of those are usually fatal (see www.cdc.gov/ncidod/dbmd/disease infor/escherichiacoli_g.htm). In 1993, an E. coli O157:H7 outbreak attributed to an unchlorinated drinking water supply in the Burdine Township of Missouri (population 3,132) resulted in 243 illnesses, four of which were fatal.

Another waterborne E. coli outbreak, which more recently received a significant amount of press, occurred in Walkerton, Ontario, Canada in May 2000. This event was attributed to a heavy rain and spread via the town’s municipal water supply. The contamination site was believed to be a supply well whose groundwater was vulnerable to surface contaminants. Over 1,300 cases of illness were documented with seven fatalities. While E. coli O157:H7 was identified as the primary microbial contaminate, Campylobacter spp., also was identified in a number of screened stool specimens and may have contributed to a number of the cases. In addition to E. coli O157:H7 and Campylobacter spp., other bacteria were encountered that are routinely identified in drinking water outbreaks, such as Shigella sonnei and a species of Salmonella.

Incidence occurrence data
Waterborne outbreaks attributed to contaminated groundwater accounted for 88.2 percent of all outbreaks during 1997-1998 (see www.cdc.gov/mmwr/preview/mmwrhtml/ss4904a1.htm).3 This groundwater outbreak data are based on the total number of outbreaks (community and non-community systems) and illustrate the susceptibility of our groundwater to contamination events. 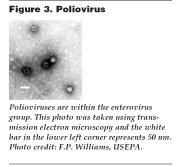 Systems particularly vulnerable are private ones where the water may not be routinely monitored and isn’t filtered or chlorinated before it reaches the tap. Systems such as these are particularly vulnerable to contamination by pathogenic human viruses in areas where septic tanks are utilized for sewage disposal (see Figure 3). The reason is the size of viruses (typically 10 times smaller than the average bacteria size of 0.75 µm), which allows them to pass through interstitial spaces—the gaps between soil particles—in dense soils that would trap larger pathogens (bacteria and protozoa).

One surveillance of a U.S. groundwater source (samples taken from various sites in different geological settings) found enterovirus genomes in 30 percent of 133 samples, Hepatitis A virus genome in 8.6 percent of 139 samples and Rotavirus genome in 13.8 percent of 130 samples.4 Viruses of concern are enteroviruses (a group consisting of the Polio, Coxsackie and Echoviruses), Hepatitis A viruses, Norwalk and Norwalk-like viruses and Rotaviruses. Most of these viruses produce self-limiting “cold-like” symptoms or diarrhea, but some can produce paralysis, meningitis and cause complication to developing fetuses.

Conclusion
Pathogenic microorganisms have a well-documented track record of contaminating our drinking water sources whether it’s surface or groundwater. Even when we utilize advanced water treatment techniques, pathogens can penetrate these barriers if equipment used in these applications isn’t closely monitored and maintained. As we’ve advanced in our understanding of water treatment, one thing is obvious—the more barriers, the lower the risk. The use of a properly installed, maintained and adequate POU device at home or office is an additional barrier that can protect your customers’ health, their family’s health, or their business personnel from a contamination event.

About the author
Dale W. Griffin, Ph.D., MSPH, is a public health and environmental microbiologist with the U.S. Geological Survey, Center for Coastal Sciences, in St. Petersburg, Fla. He can be reached at (727) 803-8747 x3113, or email: dgriffin@usgs.gov