Water Softeners Pose No Problems for Septic Tanks.” That was the headline of an executive summary published by the Water Quality Research Council (WQRC) in the late 1970s. The research was well-organized, independent and provided conclusive evidence to support the statement. No further research has been performed in the United States to challenge these findings; however, skepticism on the compatibility of water softener regeneration water with wastewater treatment system performance remains today. Much of this has originated from comments made by those that manufacture, install and service onsite wastewater treatment systems, based upon their field experience. This skepticism has led to a growing number of state and local sewage codes restricting softener use with onsite wastewater treatment systems.

These studies were designed to answer three questions:

Septic tank performance
Treatment of wastewater generated from homes, whether to an onsite wastewater treatment system or a municipal treatment facility, is predominantly dependent on microorganisms that use the waste materials as a food source, converting them to by-products that are relatively safe to public health and the environment. Unlike municipal treatment systems where both dilution and constant operator oversight assist in ensuring adequate treatment, onsite treatment systems are more susceptible to performance fluctuations, leading to the need for additional care. This care is generally the home-owner’s responsibility and is best managed by monitoring the amount and type of waste generated to the septic tank. Of course, few homeowners spend their days pondering the number of laundry loads, showers and toilet flushes contributing to their waste treatment system. Many, however, are cognizant of the risk with system abuse and generally manage certain activities to avoid problems, such as spreading laundry loads over several days rather than all in one.

The waste-consuming microbes can be negatively affected by various things. It’s common for manufacturers and installers of onsite wastewater treatment systems to educate homeowners on items appropriate for discharge, and those not to be discarded into the septic tank, such as cleaners, paints, cooking grease and oils, etc. In the case of water softeners, the question revolves around the impact on beneficial microorganisms by the added salt dosage from softener regeneration and, as a result, wastewater system performance.

Salt concentrations
While certain microorganisms, referred to as halobacteria, thrive on very elevated concentrations of salt, most cannot survive under such conditions. The point at which the salt concentration reaches a level that negatively affects the septic tank bacteria, and thus treatment, is unknown. Salts originate from many sources in addition to softeners, including those derived from the water supply and human waste. This transfer operates on a gradient, moving from high to low concentration. If there’s an excessively high gradient to which the microbe cannot adapt, it will lead to reduced activity, complete dormancy or possibly death.

The onsite wastewater treatment systems tested by NSF each received approximately 250 gallons of wastewater daily, seven days per week, as diverted from a municipal supply en route to a central treatment facility. One of the two systems received an additional waste stream from a water softener and was regenerated three times per day at approximately 3.5 pounds of salt/regeneration. The test was run for six months. Typical analyses were performed to determine proper wastewater treatment, including five-day biochemical oxygen demand and total suspended solids. No difference was detected in the treatment performance of the two systems over the course of six months.

Hydraulic loading
The amount of water used in a home has a direct impact on performance of the septic tank and absorption field. Many state onsite sewage codes

determine daily volume as a function of the number of bedrooms (see Table 1). These flows generally account for “normal” usage; i.e., showers, laundry, dishwashing, etc. They often don’t account for less common contributors, such as hot tubs, whirlpool baths, air conditioning condensate and water softeners. When permitting the installation, these factors are taken into consideration for proper sizing of the treatment tank and absorption field.

In a water softener’s case, regeneration cycles of a typical three-bedroom home average 50 gallons per cycle of additional fluid contribution to the wastewater flow. With regeneration occurring generally every other day, average daily contribution is 25 gallons. Most tanks, as shown in Table 1, are sized a minimum of 50 percent larger than expected flow. At the low end of tank sizing, this is several hundred gallons of excess capacity. The softener contribution, therefore, is minimal and would have no expected impact on waste treatment system performance. This was confirmed in NSF testing of the two treatment systems discussed here.

Soil percolation rate
The absorption field portion for an onsite wastewater treatment system serves two primary functions. First, it continues the biological treatment process begun in the treatment tank. Second, it serves to disperse the treated liquid. To properly serve both functions, the receiving soils must be of a proper type and receive properly treated waste over time to avoid altering significantly their attributes and functions.

Water softeners contribute additional sodium and chloride ions to the absorption field. These have the potential to affect water flow through the dispersal field by swelling soil particles, thus reducing the average pore size. The University of Wisconsin-Madison researched this subject to determine impact on soil changes with softener regeneration water. They sampled septic tanks from 11 homes, five of which used water softeners. In support of their field analysis, researchers also investigated a number of theoretical conditions and other published research done on the same or similar issue.

Their findings concluded the softener regeneration water would create no adverse effect on the functioning of the absorption field.

Where are we today?
While this earlier research is well circulated and often referenced, it hasn’t changed the fact that several state onsite sewage codes restrict, discourage or prohibit softener regeneration water from entering a septic tank. Table 2 reviews the current state codes with such limitations. 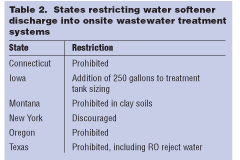 The most recent addition to the list is Texas, which implemented its new code restrictions on June 7, 2001. In light of these changes, recent meetings were held with NSF, WQA and representatives of the Texas National Resource Conservation Commission (TNRCC), who were responsible for writing and administering the Texas Onsite Sewage Facility Rules. These meetings underscored concerns of the TNRCC, representing the same issues intended to be addressed in the previous studies. Their confidence in the past research has been swayed by comments from the onsite wastewater treatment industry where field experience is apparently showing contrary results. To date, this hasn’t been quantified nor researched to determine if these findings conclusively show poor septic tank performance resulting from the softener regeneration water.

While it seems unusual that such information, neither researched or published, would lead to dramatic restrictions on water softener use, it’s important to understand the responsibilities of health officials. Local and state regulatory officials are charged with protecting public health and the environment. They’ll more often err on the side of conservatism for obvious reasons. It then becomes the responsibility of the industry, whether water quality or wastewater treatment, to challenge this conservatism with sound, credible research and data to alter such positions.

Conclusion
Onsite wastewater treatment systems are recognized as being an appropriate and effective means of treating daily household flows. Improper treatment of this waste stream and/or system malfunction can lead to a risk of public health and environmental contamination. State and local onsite sewage codes are designed to limit this risk, optimizing the potential for acceptable performance. The prior research was designed to eliminate softener regeneration water as a consideration of risk for onsite treatment performance; however, it has failed to do this conclusively.

Further research may be of value and address a larger number of system types and field conditions. The expectation is that such research will only further prove the theory of the scientific community that addition of regeneration water, based upon salt concentration and flow, is simply too inconsequential to impact the performance of an onsite wastewater treatment system.

Until such time as more data are available that can be considered conclusive, it’s critical the water quality and wastewater treatment industries work in harmony with regulatory officials as new codes are developed at the local and state levels. Available research, field experience and comments should be presented for discussion and consideration prior to adoption of code language. This interaction will ensure code language is reflective of the best available information and takes into consideration all perspectives.

About the author
Tom Bruursema is a graduate of Eastern Michigan University, and is presently general manager for the Drinking Water and Wastewater Treatment Unit Programs at NSF International. He has over 16 years experience in product testing and certification. He can be reached at (734) 769-5575 or email: bruursema@nsf.org.