The state of California requires residential water treatment devices that make a health or safety claim to be certified prior to being sold in the state. There are some key words in the previous sentence.

Another important word is certification. To obtain California certification, the device must be tested by a “California-approved, independent” laboratory using a preapproved protocol for a health or safety claim. For filter-type applications, this would mean that the device would need to be tested to 200 percent of claimed capacity or 120 percent of claimed capacity if some type of performance indicator, like a gallon counter, was used in accordance with ANSI/NSF Standard 53: Drinking Water Treatment Units (DWTUs)—Health Effects.

Aesthetic or health claim?
Did you know that chlorine reduction claims, unless properly qualified, now fall within California’s definition of a health or safety claim? No longer is it simply an issue of taste or odor. In 1998, the SDWA was revised to include regulation of maximum allowable concentrations of disinfectants and disinfection by-products (DBPs) in drinking water. In general, the regulations identified in Table 1 took effect on Jan. 1. 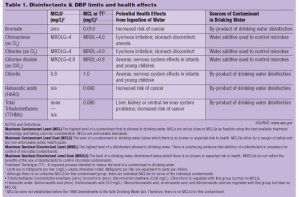 Because maximum allowable concentrations of chlorine, chloramines and chlorine dioxide are now regulated, California has advised that unqualified claims of chlorine reduction will be considered to be a health or safety claim (see WC&P, March 2002, “Newsreel”). California first alerted manufacturers, who had devices certified by the state for other health or safety claims, in December 2000 that devices that also made claims for the reduction of chlorine, chloramines or chlorine dioxide must be certified for those particular claims by Jan. 1. In March 2001, California advised manufacturers of certified devices or devices pending certification that advertising not clearly identifying chlorine, chloramine or chlorine dioxide claims as aesthetic would require certification.

Change or certify
As such, manufacturers and assemblers of devices that make a chlorine, chloramine or chlorine dioxide claim must now change advertising claims or certify residential drinking water treatment devices for that claim. So, if a device claims to reduce chlorine, chloramines or chlorine dioxide, what should be done to avoid any penalties or fines when selling in California? California has advised that a device wouldn’t require certification for a disinfectant claim as long as it took one of the following forms:

California may accept other wording variations. As yet, it hasn’t specified influent concentrations or pass/fail criteria for unqualified chlorine, chloramines or chlorine dioxide claims. To discuss acceptable wording variations or testing requirements, contact the California Department of Health Services [Lynda Dyane at (916) 324-3726 or ldyane@dhs. ca.gov; or Terry Macaulay at (916) 323-8069 or tmacaula@dhs.ca.gov)].

RO systems
RO systems generally specify that a prefilter protects the membrane from chlorine with statements similar to the following: “Chlorine will damage a T.F.C. Membrane. The Sediment/Carbon Prefilter will remove chlorine from the incoming water. Change filter every 6 months, more often if the water contains more than 1 ppm chlorine.” California wouldn’t require this statement to say aesthetic chlorine because the manufacturer isn’t making an overt chlorine reduction claim.

If an RO system makes a claim for arsenic reduction, the manufacturer must include the following statements in certain documents: “This system shall only be used for arsenic reduction on chlorinated water supplies containing detectable residual free chlorine at the system inlet. Water systems using an in-line chlorinator should provide a one-minute chlorine contact time before the RO system.” California wouldn’t require this statement to say aesthetic chlorine because the manufacturer isn’t making a chlorine reduction claim.

If an RO system filter carries a claim for chlorine reduction under ANSI/NSF Standard 42: DWTUs—Aesthetic Effects, then the same rules required for filters making chlorine, chloramine and chlorine dioxide claims would apply to the RO system.

Check the wording
If chlorine, chloramine or chlorine dioxide claims are changed to be aesthetic, manuals, labels, performance data sheets, promotional documents or other media such as promotional videos or demos shouldn’t make mention of the fact that chlorine, chloramine or chlorine dioxide are now regulated. If such statements are made, then it’s likely that California consumer protection entities would consider the device to be making a health effect claim for reduction even if the word aesthetic is included in the claim.

If the device is certified by an organization such as NSF International, Underwriters Laboratories, or the Water Quality Association for chlorine, chlora-mine, or taste and odor reduction, be sure to check with that organization before changing any language required by their policies.

On the other hand, the state of Wisconsin requires registration for devices connected to the plumbing system that also claim to reduce chlorine, chloramines or chlorine dioxide whether the word aesthetic is included in advertised statements or not. Wisconsin advises that chlorine or chloramine reduction claims be supported by testing in accordance with ANSI/NSF 42 or other protocols accepted by the state.

Conclusion
The change in USEPA disinfectants and disinfection by-products regulations has repercussions for how California residential water treatment devices are advertised. The cost of revising colored advertising brochures, websites and informing all dealers operating in California of the impact of the regulations is significant, but manufacturers have little choice. That’s because the size of the economy of California is $1.3 trillion, making it the fifth largest in the world today — trailing the United Kingdom and just ahead of France.

About the authors
Terry Macaulay currently manages the California Drinking Water Treatment Device Certification Program at the California Department of Health Services. Macaulay is a registered engineer and has worked for California environmental regulatory agencies for more than 20 years.

Loretta Trapp is special projects and regulatory affairs manager for Windsor, Wis.-based Clack Corp. Before that, she was Drinking Water Treatment Unit Program operations manager for NSF International, of Ann Arbor, Mich. She has been a member of the NSF Joint Committee on Drinking Water Treatment Units, the Water Quality Association’s Advertising Guidelines Committee and WQA Plumbing Code Task Force. She was honored with an Honorary Membership Award from the WQA in 1992 and received the Wisconsin WQA’s Lifetime Achievement Award in 1998. This is her second year on the WC&P Technical Review Committee. She can be reached at (608) 846-3010 or email: trapp@clackcorp.com.