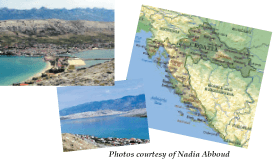 On the beautiful island of Lastovo, one of the southernmost islands in the Adriatic Sea off Croatia’s coast, the resource one would think most abundant was seriously lacking — drinking water.

Meeting basic water needs in this Balkan country was compounded by Croatia’s civil war that divided the natives by ethnic identity and nearly consumed the troubled region. Such turmoil in this area of the world dates back to 1912 and beyond. During this latest period of civil unrest, which has followed a century of political upheaval, the Balkans — mainly Bosnia, Croatia and Serbia — took center stage for continuous ethnic civil wars that meant skyrocketing inflation, currency crises and increased social tension.

But through these difficult times, the Croatian Water Resource Commission continued to believe in the need to desalinate brackish or seawater for potable use on islands like Lastovo, where rainwater was the only source of drinking water for 4.3 million Croatians. Desalination research had been ongoing since the 1960s; however, the commission believed the desalination process would prove too costly. 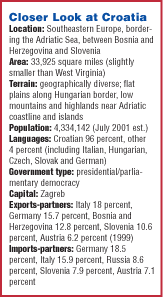 The commission studied alternatives such as aqueducts. Still, with a development timeline up to 20 years, which are either far away from the coast or in isolated coves, citizens need a more expedient technology. The country’s social and political turmoil also delayed developing aqueducts, so other alternatives were investigated.

Path to a solution
One company, which had been supplying the region with viable drinking water options, suggested using a membrane separation process. Initial feasibility studies calculated that a two-stage system would be required, consisting of three modules in the first stage and one module in the second stage, with each module having six membranes. The system configuration was calculated to achieve desired results from an operating pressure of 20 bars, feed water concentration of 3,000 milligrams per liter (mg/L) total dissolved solids (TDS), and feed water temperature of 25 degrees C. It also recommended less equipment to reduce capital costs while only slightly reducing the productivity and performance of the process.

Reverse osmosis (RO), which has evolved into a more viable option for desalination and brackish water treatment in recent years, removes many organic compounds and 90-to-99 percent of all ions from the processed water (see FYI). In addition, RO can reject 99.9+ percent of viruses, bacteria and pyrogens. The driving force of this rejection process is pressure, between 200-to-1,200 pounds per square inch gauge (psig) or 13.8-to-68.9 bar, to push water through the semipermeable membrane (see Figure 1). The higher the pressure, the larger the driving force and, hence, the greater the amount of purified water produced. Conversely, the higher the raw water’s TDS, the greater the driving force — generally supplied by pumps — required to push the water through the membrane. 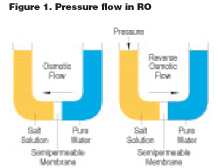 Keep in mind that the membrane usually accounts for 15-to-40 percent of the RO system price. Costs associated with this desalination process also are higher due to the necessary corrosion-proof equipment and higher energy requirements to power the equipment. RO membranes must be replaced periodically, placing significant importance on the selection process. Although many types of membranes exist with unique characteristics, selection criteria should include chemical tolerance, mechanical suitability, cleanability, separation, flow performance and membrane life. Today’s membranes are constantly being improved, and manufactured more efficiently and at less cost, thus making RO more economical than ever before.

Making it work
The strategy for plant construction of the company assisting Lastovo was to use only half as many membranes as planned and eliminate one pressure vessel. This made the project for desalination much more feasible, thereby alleviating the water commission’s cost concerns. The revised design was able to save 25 percent of the cost of the initial design. It also helped to reduce operating and maintenance costs by lowering operating pressures and reducing the need for more replacement membranes. A smaller number of membranes saves money by requiring less chemicals to clean fouling, smaller motors to power operation, and less overall power. The commission, therefore, decided to build the desalination plant.

While the island has many underground waters (predominantly wells), they are brackish with TDS between 1,000-3,000 mg/L. The Lastovo desalination plant, with a capacity of 300 cubic meters per day (m³/day) of drinking water, processes feedwater pumped out of five wells that are about 30 meters deep with a total yield of 5 liters per second (L/s) of brackish water. The TDS of the finished water is approximately 50 mg/L. The plant officially went online in September 1998, and usually operates from 9-to-20 hours a day to service the freshwater needs of Lastovo. Reliability of the equipment used is extremely important because this is now the only drinking water source for the island. The quality of the freshwater, productivity and low operating and maintenance costs justified the decision to build the plant. In fact, the quality of water is so good, the town of Prgovo Polje on the island was able to reduce waterworks pipes to about a third of their diameter because of less scale formation inside the pipes.

Tweaking operations
Moreover, after a year of study, it was realized that by changing the operation of the plant’s pumps from intermittent to continuous operation would solve falling feedwater temperatures when lower freshwater was expected. It also synchronized dosage pump operation with the implementation of the desalination equipment. This further lowered TDS in freshwater, bringing the quality of the permeate near that of rainwater, making Lastovo residents trust and, thus, use the water with more regularity, since they had been used to drinking rainwater. Before the plant went online, residents had been getting brackish water only for sanitary purposes. The only problem encountered in the entire process was a shortage of pumping stations for transporting freshwater and transfer of brine to the sea.

Conclusion
Nevertheless, the manufacturer’s projected performances have been easily reached and maintained. This has occurred with help from the Institute for Corrosion Research and Desalination and the Croatian Academy of Sciences and Arts, which are involved with all the country’s water works projects. Even in times of strife and unrest that affect everyday living, Croatia was able to resolve the drinking needs at Lastovo with extensive research by the water commission with the help of an equipment manufacturer and with a highly trained workforce at the plant. Notwithstanding the years of civil strife, projects like these attest to a nation’s will to fulfill basic needs for its population.

About the author
Kenneth P. Goodboy is general manager of filtration for Severn Trent Services, of Fort Washington, Pa. Previously, he was vice president of operations and membranes with Zenon Environmental Inc. Goodboy received his bachelor’s degree in chemical engineering from the University of Missouri in Rolla. Severn Trent Services is a supplier of water and wastewater treatment solutions, which includes membrane systems, bottling equipment lines, adsorption, evaporation, municipal treatment technologies and other unit operations. He can be reached at (310) 618-9700, (310) 618-6864 (fax) or email: http://kgoodboy@severntrentservices.com.

FYI—RO Desal on a grand scale

At the heart of the desalination process, reverse osmosis (RO) filtration utilizes a semi-permeable membrane that enables the water being purified to pass through while most contaminants are removed.

Osmosis is the natural process that results in movement of water of different concentrations of dissolved solids through a semi-permeable membrane from the dilute side (fewer dissolved ions) to the concentrated side (more dissolved ions). Thus, osmosis tends to equalize the strength of the solution on both sides of a membrane. The force that causes this flow is referred to as osmotic pressure. This force can be explained several ways. One simple explanation is that since the dilute side has fewer dissolved ions and therefore more water per unit volume there are more collisions of water molecules (pressure) with the membrane. Since the water can freely move through the membrane it will naturally flow from the dilute side to the concentrated side until both sides reach equilibrium.

Reversing the osmotic process is accomplished by applying pressure to stop the natural osmosis process, creating RO. The pores in a RO membrane are so small that they affect small solutes, including salts with ionic radii in the angstroms (Å) diameter. They’re generally regarded to be in the 4-to-8 Å range, four orders of magnitude smaller than the finest of the normal-flow particle filters. The mechanism of rejection with RO is much more complex than in ultrafiltration or microfiltration. A smaller pore size is used that results in higher levels of rejection. Rejection in RO isn’t just based solely on a sieving mechanism, but on electrochemical interactions as well.

Most RO technology utilizes the crossflow process, allowing the membrane to continuously clean itself. Crossflow also permits long-term performance of an RO membrane by reducing the rate of membrane fouling. It allows water to pass through the membrane while a separate flow ensures that precipitated salts and other impurities are carried away from the membrane surface. Desalination—removal of salts from seawater utilizing RO membrane filtration—requires that system components be comprised of corrosion-proof equipment to avoid damage from the effects of salt water.