Despite the great strides in water treatment to eliminate bacterial pathogens, these agents continue to contribute to waterborne disease outbreaks (see Table 1). Of the 21 documented waterborne bacterial disease outbreaks in the United States from 1985-1994, 12 were due to Shigella, six to Campylobacter, two to Salmonella and one to Escherichia coli O157:H7. Drinking water sources may contain a wide variety of bacteria that are opportunistic or overt pathogens in addition to over 80 genera of nonpathogenic bacteria. 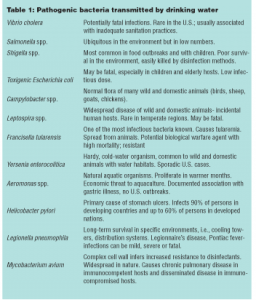 Since the development of vaccines and antibiotic treatments, bacteria had not been as great a public health threat as they were in past centuries. In recent decades, the emergence of new, more virulent strains and bacteria that are resistant to many antibiotics have caused scientists to re-examine these microorganisms with increased respect.

Bacterial morphology
Bacteria are the smallest (0.5 to 1 µm in diameter), simplest, single-celled organisms (known as prokaryotes) that can live completely on their own with all the biochemical equipment needed for metabolism. Bacteria consist primarily of a cellular material contained within a cell wall. They’re classified largely on the properties of the cell wall, the most common distinction being Gram positive (having a thick, single layered cell wall) or Gram negative (a multi-layered cell wall with an outer membrane).

Bacteria may be shaped like spheres (cocci), spirals (helical) or cylinders (rods). Those with no defined shape are called pleomorphic. Rod-shaped bacteria may have external appendages (flagella) to aid in their motility. Cells usually exist in chains or aggregates, known as colonies. 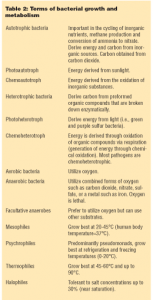 Capable of multiplying every 20 minutes, bacteria can quickly increase to large numbers in favorable environments. Bacterial cells have been found surviving at great extremes, such as temperatures ranging from 482oF to below freezing. Some have few nutritional needs and can grow in distilled water or even harsh chemicals. Perhaps the most amazing trait of bacteria is their ability to adapt and survive under just about any environmental conditions; hence, the increasing problem of bacterial resistance to disinfectants.

Pathogenic bacteria
Most bacteria are harmless to humans and have been used to produce medicines, foods and functional enzymes. In addition, bacteria are essential for the degradation and nutrient cycling of plants. Some bacteria, known as pathogens, cause disease in humans. Of particular concern to the water industry is the enteric bacteria, which are able to colonize the human gut and cause a wide variety of diseases following ingestion of the organism. Enteric bacterial pathogens typically wreak havoc by either competing with normal intestinal cells for nutrients or by secreting toxins that cause a variety of mild to severe symptoms. Other water-related transmission routes include skin exposures, causing rashes and irritations, and respiratory exposures from shower and fountain aerosols.

Lipopolysaccharide (LPS), or endotoxin, is usually the pathogenic component of Gram negative cells. Endotoxins comprise the outer layer of the cells, are very heat stable, and induce a strong immune response in hosts when the bacteria die and the cell wall is broken down. Most enteric illnesses are caused by this group of bacteria. Yersenia pestis (agent of the Black Plague) is an example of a Gram negative rod.

Other bacteria produce exotoxin, a harmful protein that’s released outside the cell during growth. Cholera, botulism and diptheria are all examples of exotoxins. Enterohemorhagic and enterotoxigenic E. coli also produce exotoxins. Shigella dysenteriae produces both an endotoxin and an exotoxin.

Indicator bacteria
Indicator organisms are used in water microbiology as evidence that fecal contamination has occurred. Indicators are chosen because they’re easier to detect than specific pathogens. They may include fecal and total coliforms (first used in 1880), fecal streptococci, clostridia and others. No organism, however, serves as a universal indicator of all pathogenic species. For example, pathogenic bacteria that do not correlate with coliform indicators include Pseudomonas, Aeromonas, Plesiomonas, Yersinia, Vibrio, Legionella and Mycobacterium. This is particularly worrisome as the monitoring of indicator species alone may not protect the health of the public against other harmful agents.

Opportunistic bacteria
Some bacteria are pathogens only under specific conditions, such as when a severely immunocompromised person is exposed. These bacteria may be natural inhabitants of water such as Pseudomonas, Serratia, Acinetobacter, Chromobacterium, Achromobacter, Aeromonas, etc. Or, they may be introduced from surrounding soil and plants such as Bacillus, Enterobacter, Klebsiella, Actinomyces, Streptomyces, etc. Opportunistic bacteria may also be introduced to water from regrowth and biofilm conditions in the distribution system.

Nuisance bacteria
A group of bacteria known as iron bacteria (i.e., Gallionella and Siderocapsa) and sulfur bacteria (i.e., Desulfovibrio and Thiobacillis) include organisms capable of depositing large amounts of iron or sulfur, and associated slimes, during their lifecycle. These deposits may foul or plug pipes, cause odor, taste and color changes in water, and increase the turbidity and corrosiveness of the water.

Earthy-musty odors are among the most difficult natural odors to eliminate from municipal water supplies in many regions worldwide. Although originally attributed to chemical contaminants, it’s known today that these odors are due to microbial agents called Actinomycetes. Resembling fungi in appearance, Actinomycetes are actually filamentous, branching bacteria. The most common known to water supply problems is Streptomyces.

Stressed organisms
Indicator bacteria, such as fecal and total coliforms and fecal streptococci, become stressed or injured in water, causing them to enter a non-reproductive state. Due to this condition, cultural analysis may fail to detect anywhere from 10-to-90 percent of the indicator population, leading to false negative findings that could impact water quality and public health. Common stress conditions include disinfection, the presence of metals and salts, extreme temperature or pH, solar irradiation and many others.

Conclusion
Pathogenic bacteria continue to be recognized. The four bacteria listed on the U.S. Environmental Protection Agency’s “Contaminant Candidate List” are Aeromonas, Cyanobacteria, Helicobacter and Mycobacterium avium complex. Experts agree that there’s a sparse database on these organisms with little information on occurrence, exposure and risk assessment. It’s important to understand the basics of bacteria to develop products to minimize the impact of these agents on public health. With the emergence of poorly understood bacteria, it’s increasingly important to prevent bacterial infections before they occur rather than rely on post-infection treatment.