Doing it Aboveboard in the Nutmeg State: Connecticut’s Professional Water Systems is Well-Mannered 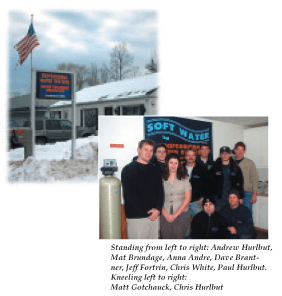 To hear Paul Hurlbut tell it, he thoroughly enjoys running a business that garners annual sales in the seven-figure range. As vice president of Professional Water Systems Inc., of Ridgefield, Conn., he is also subject to many state regulations and requirements as soon as he opens the doors of his water treatment store every morning. Through it all, Hurlbut relishes the challenge and overcomes various obstacles in his path.

“The biggest struggle for us is that Connecticut is a zero-discharge state,” he explains. “They don’t want salt from water softeners to discharge into septic systems. In fact, in their infinite wisdom, they didn’t want to allow anything to discharge in their systems.” This can make running a business difficult for present water treatment operations in the state, or anyone looking to get into the market.

Start in the kitchen
Twenty years ago, Hurlbut’s brother, Fred, started the business from scratch. Literally. Paul remembers his sibling working off his kitchen table. Fred is president of Professional Water Systems and is currently semi-retired as a salesperson for another water treatment company in Florida. Before 1985, the business was known as Professional Water Care.

Born in Long Island, N.Y., and raised in Atlanta, the brothers went into the water treatment business through a familial relationship. Fred’s father-in-law was a well driller in Connecticut. In talks with him, Fred got the idea of entering the water treatment business, recognizing a lack of competition in the area. As Fred, 52, began to establish the business, he needed help running day-to-day operations. He called on his brother who, at the time, was managing a car stereo business in Atlanta.

“When he made me the offer in 1982, I didn’t even know what hard water was,” Paul, 42, says. “It was totally new to me but I had always been a mechanically inclined person. It turned out to be a real good thing.” 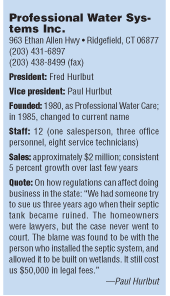 Learn as you go
Paul laughs at the recollection and says he learned through hands-on training since his brother is “a better businessperson than a mechanic. A lot of it has been trial and error.” He says a good part of the business’ success can be attributed to Fred’s ability to utilize the supply houses as a good training ground. He also cites the value of being a Water Quality Association member for 20 years, and the association’s various technical seminars. “I would love to have more WQA seminars close to us,” he adds, “so I could send our technicians.”

Over time, Professional Water Systems has thrived. About 80 percent of its business derives from the residential sector while commercial accounts for nearly 20 percent and industrial is a scant 1 percent. With a staff of 12 and potential for more very soon, the business currently has between 10, 000 and 12,000 customer accounts. That’s not bad for serving a community of around 25,000 people. Autotrol control valves are used for all softeners and neutralizers; Fleck control valves for all commercial applications; and CUNO/Water Factory Systems’ reverse osmosis line is utilized in residential as well as some commercial situations. Plus, the business is stabilized by a lot of equipment rentals.

Growth has increased at a healthy 5 percent for the last few years. Sales and servicing alone has a 10-to-12 percent spike. Paul says sales were approximately $2 million last year. At the time of this interview, he was looking for two more service technicians. Even with the promise of a burgeoning business well into the future, it often comes down to state regulations for the Hurlbuts.

The town of Ridgefield is located in Fairfield County, one of the more affluent areas of the state. Houses start at $300,000 and the average dwelling, typically on two-to-five acre plots, goes for between $700,000 and $1 million. The bulk of the business is culled from a 75-mile radius stretching from southern Fairfield County to Westchester County, N.Y.

The income brackets of Paul’s customers have no bearing on how he conducts business. “I don’t charge anyone in a million-dollar home any differently than I would a person in a $200,000 home,” he says. “I’ll walk into a home and if the water is not bad, I tell them they don’t need anything.”

Sizing up the wells
With 85 percent of customers on well water, the most frequent water problems are very low pH, high iron and manganese, and hard water. Paul uses crush limestone neutralizer followed by a water softener as a primary solution.

By all early accounts, 2002 looks very promising for the business. But some things will never be the same for the Hurlbuts on a personal level. The effects of the Sept. 11 terrorist attacks will long be felt.

“I think with September and everything hitting the fan, things slowed down for us. That was our backyard. We had quite a few customers who were in the World Trade Centers that day. It definitely hit home,” Paul says.

Little change
Interestingly, not much has changed in 20 years for Professional Water Systems. Competition is still in short supply. Paul says there are five legitimate companies in the Ridgefield area with Culligan being the largest. In addition, the Big Box issue is a moot point for his business because he says, “My clientele is not the do-it-yourself types with water treatment equipment.”

Two years ago, Paul recalls, the local water company attempted to market drinking water systems and the program promptly failed. Though drinking water is a small segment of his business, he found the developments noteworthy.

Paul recognizes that service will determine whether his business will keep growing. Currently, he has two nephews working with him so he feels a certain continuity into the future.

“The one thing holding us back is getting a good service crew. With the economy slowing down a bit, I have been able to pick and choose a couple of good mechanics,” he says. “My next big push will be to go after the industrial market, which I haven’t been able to target without good help.”

Conclusion
Regardless of competition or staffing, working in Connecticut also means having to meet certain requirements.

“Connecticut is a very strict state as far as water rules and regulations,” Paul says. “They’re now imposing new requirements for community water systems in gas stations, restaurants and anything that has well water supplying a certain amount of people to have a licensed plant operator run their systems. Regulations will probably be the biggest driving factor in the industry here, which could be good or bad.”

Rather than working against him, that fact works in his favor. For Professional Water Systems, the good outweighs the bad.