Pulling Water from the Air: Part 2—Looking Skyward for Help, The Air We Breathe Offers Potential Source for Potable Water

Summary: This is the second in a two-part series, offering different looks at this concept from two companies. Accessibility to potable water throughout the world is becoming more scarce as population grows and consumption hits unprecedented levels. As a result, many people are looking for new and different ways of finding the vital resource and transforming it into clean water. Cost is also an important factor to consider.

For several years, Florida has been in the clutches of one of the most severe droughts in recent times. Water tables are so low that some water supplies have become brackish. Residents along the coastal areas and many in the southern part of the state have had to turn to bottled water from inland resources to provide safe drinking water. Business leaders, geologists and water experts from around the globe are in basic agreement that potable water supplies seem to be shrinking in comparison to demand. Meanwhile, a recent United Nations report indicates that world population, currently 6 billion, could grow to between 9.3 billion and 10.9 billion in the next half century

As such, attempts have been made to identify and develop other acceptable methods for providing water. Desalination—the removal of salt from seawater to provide potable water for human consumption or other uses—is extremely expensive and requires massive infrastructure development to move the water inland from coastal facilities. Reclamation of contaminated water sources is similarly expensive and reclamation of some sources is simply not possible. In the past, a few companies have attempted to melt Arctic or Antarctic ice and ship water to those in need. Again, the infrastructure costs to provide water using this method is prohibitive.

Out of the blue
One source of water that has escaped the general scrutiny is the humidity in air. Seventy-one percent of the Earth’s surface is covered with water. The hydrological cycle driven by the evaporization/condensation of moisture from the oceans provides an almost infinite source of water. Except in the most arid places on the planet, there’s sufficient humidity to allow the condensation of water. It would seem logical that such water can be purified and used as potable water. But, is the technology to accomplish this task available at a reasonable cost? The answer is yes.

One company has spent the past 10 years developing a product to address the global need for safe, renewable, drinking water. The effort began in 1992, when an independent inventor based in Ogden, Utah, developed a method of extracting water from air, taking the collected water and passing it through a multi-stage treatment process. The result was an elementary method of producing clean, potable drinking water from the air. With a backer to manufacture and market the units, different marketing arrangements were attempted that resulted in some limited success over the next three years. Manufacturing the units individually, however, was slow and expensive. It also was found that modifications to improve the efficiency of technology and serviceability were required before the units could be produced in quantity for the general public. Even with these limitations, however, they were selling through “word of mouth.”

Taking it to the streets
In 1997, it was decided to temporarily stop marketing and distribution of the products. This was a result of a consensus to pull back and reevaluate the efficiency of the product, update its manufacturing process, improve the design and make the unit more “user friendly” and affordable for the general public. Work also began on developing the infrastructure needed to facilitate rapid global growth and building a strong distribution channel so the units could quickly be moved from production to the end-user.

Early last year, the effort to improve the efficiency and design of the units moved into high gear. A Montana-based engineering and design firm was retained to finalize the improvements and prepare for mass production. New, more efficient methods of extracting and purifying were developed along with new computer technology to provide the means to more efficiently operate in varying conditions, monitor production output and provide hot and cold water dispensing capabilities, while simultaneously reducing electrical costs of operation.

Later, the company, in finalizing its plans to re-enter the market, modified its name. Agreements to mass-produce the product were finalized, as were the new engineering designs and specifications. The new design was then submitted to Intertek Testing Services for safety testing and certification. It also was submitted to L3 Corporation for climate/production testing and verification. The safety testing resulted in UL, CE, CTL & TUV/GS approvals, the latter two for international testing requirements; it also was rated as exceeding the U.S. Environmental Protection Agency standards for drinking water quality and purity. 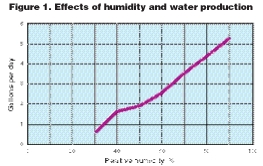 The new unit, which is about the size of a large desktop computer monitor and designed for countertop use, utilizes a four-step process in the production and purification of water. First, the unit draws air through an air filter in the unit. This initial step cleans 95 percent of particulate in the air. The clean air is then circulated through a system that extracts moisture from the air and deposits it in a collection chamber. Water from the collection chamber is then passed through two more cleaning and purification filters, a micron carbon block filter to extract additional particulate and eliminates unpleasant tastes and odors, and a UV system designed to meet the standards for disinfection—similar to those in hospitals—to kill bacteria, parasites and viruses. Finally, ensuring the water placed in the unit’s storage container is always fresh and clean, it’s re-circulated through the purification process at regular intervals based on computer models programmed into the unit. The result is a supply of drinking water that’s renewable, fresh and pure.

Serving some needs
Though the unit doesn’t have the capability to offset 100 percent of the homeowner’s water needs, it does have the ability to produce enough water for drinking and cooking needs—as much as 9 gallons per day—depending on temperature and humidity.

Applications for this technology don’t stop with the countertop unit. Developers also have begun work on other product offerings utilizing the same core technology, but on a larger scale. Soon, additional products will be available for more general applications such as office use with larger storage capacities. Even larger units are under development that will provide enough water for emergency backup in hospitals or temporary water needs of disaster victims. Units are also planned for irrigation of small fields, or as a permanent source of clean water for a small village or neighborhood.

Conclusion
Pulling water from humidity in the air is more feasible than ever before. More applications and technological improvements are now under development to ensure people will no longer have to rely completely on the availability or quality of water provided from natural aquifers or municipal water systems for a reliable source of available, clean drinking water. The future of water availability has arrived.

Acknowledgment
The authors wish to thank Stratigix ID Solutions, of Bozeman, Mont., for their work in design, modification and improvements on the aforementioned unit.

About the authors
Elton Moore and Martha Dunwoody are owners of Pure Quality Water Services Inc., of Leesburg, Fla., which sells and services water treatment products and has its own bottled water plant. The company has worked closely with Aquaair Technologies in redesigning and improving the servicing and user friendly aspects of the unit. Pure Quality Water is the regional distributor of Aquaair products, including the Aquaair Cloudburst™ unit described above. The authors can be reached at (800) 991-7873, (352) 728-2333 (fax) or email: [email protected].

Brian Whipple is the vice president of sales and marketing agent for Aquaair Technologies Inc., of Salt Lake City.