While the six ANSI/NSF Drinking Water Treatment Unit (DWTU) Standards cover many point-of-use and point-of-entry (POU/POE) claims and technologies, there has been a noticeable gap with respect to microbiological treatment. Microbiological claims available today within the current standards include cysts (Standard 53), bacteriostasis (Standard 42), microbiological reduction by ultraviolet (UV) disinfection (Standard 55) and distillation (Standard 62). The obvious areas missing from this list include mechanical reduction of bacteria and viral contaminants, along with other disinfection technologies such as ozone and halogen.

The NSF Standards Department and DWTU Joint Committee are working collectively to develop new test methods and criteria for these additional technologies and claims. Once complete, these new standards will take the place of another widely recognized standard, EPA Standard and Protocol for Testing Microbiological Water Purifiers (EPA Guide Standard). The U.S. Environmental Protection Agency (USEPA) guideline has come to be the recognized method and criteria available today for testing of broad microbiological treatment claims beyond existing ANSI/NSF Standards.

The EPA Guide Standard
The EPA Guide Standard was adopted in 1986 and serves to test those devices making microbiological claims of water purification. According to the standard, a “purifier” is any treatment unit claiming to remove, kill or inactivate all types of disease-causing microorganisms from water, including bacteria, viruses and protozoan cysts. Data generated under this guideline are still used today to support the USEPA registration with the USEPA Office of Pesticide Programs of all products making the claim of being a water purifier and using a pesticide as part of the treatment process. Many treatment systems don’t use a pesticide and, therefore, aren’t required to have USEPA registration; however, many non-pesticide based treatment technologies are still evaluated to the EPA Guide Standard when making a “purifier” claim.

The EPA Guide Standard contains technology-specific test protocols for halogenated resins, UV treatment systems and ceramic candles. It provides the general framework to develop specific test protocols for any other technology. For example, this framework includes specifications for the challenge water characteristics designed to simulate a worse case untreated water source. It also includes provisions for elevated levels of turbidity, total dissolved solids (TDS), and total organic carbon (TOC), high and low pH conditions, and varying water temperatures, depending on the type of technology. Three separate tests are conducted according to the standard. A protozoan cyst reduction test can be completed according to either the EPA Guide Standard or ANSI/NSF Standard 53 using live cysts or microspheres. The bacterial reduction challenge is performed using Klebsiella terrigena, and a mixed challenge of Polio and Rotavirus are used for the viral challenge. Use of MS2 coliphage for the viral testing, though not specified in the EPA Guide Standard, has been accepted by the USEPA as a suitable alternative. Reduction requirements for all three tests are shown in Table 1. 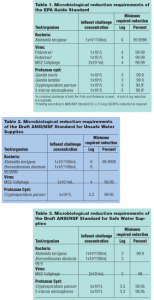 ANSI/NSF Microbiological Treatment Standards status
Of considerable discussion and debate has been the proper combination of claims, i.e., cyst, bacterial and viral reduction. The EPA Guide Standard appropriately sets requirements for all three, as it addresses waters of unknown microbiological quality and designates compliant product as being a high level “purifier.” Many in the industry would argue affordable technologies exist to effectively remove one or two of these rather than all three and, thus, these technologies are of value to the marketplace. Others counter that position with the viewpoint that these contaminants aren’t necessarily separated in the drinking water supply. Thus, removal of only a portion isn’t of benefit. Ultimately, the concern exists for proper labeling to avoid consumer confusion and misunderstanding of product capabilities. It’s a rather complex set of issues that has taken time to analyze and reach consensus. While we’re not there yet, a lot of progress has been made.

An important point of agreement among the various committee members was to separate out claims for safe vs. unsafe water supplies. The draft definitions are as follows:

Unsafe water: Water that 1) is known to contain disease-causing bacteria, viruses, protozoa or other disease-causing microbiological agents; 2) shows a positive test for an indicator organism; 3) is determined unsafe by an appropriate health or regulatory agency, or 4) hasn’t been shown to meet appropriate health agency microbiological guidelines.

Reaching consensus
Based on this initial split of water quality, the remainder of the ANSI/NSF draft purifier standard differentiates testing and criteria under each of these two conditions. For unsafe water, agreement has been relatively easy to reach. Consistent with the EPA Guide Standard, it’s agreed that technologies treating unsafe water must be capable of meeting all three aforementioned claims. The draft criteria are provided in Table 2.

Conversely, the treatment of safe water has been more controversial. Through much debate, the current, generally agreed upon position is to require bacterial and viral claims to be combined, while allowing reduction of cysts and heterotrophic plate count (HPC) bacteria to be separate claims. The draft criteria are provided in Table 3.

Conclusion
Adoption of these various standards for microbiological treatment claims will provide an important expansion of available performance testing and certification while benefiting the industry, public health officials and consumers. As with all ANSI standards, the process of reaching consensus is never easy. It takes time and effort from many individuals. While there’s work yet to be done, the major concerns have been debated and generally resolved. As each technology is addressed individually, including test method validation, it will be adopted and available for testing and certification. This process of review and balloting is expected to continue throughout this year. For the latest activities on these and many other revision and new standard initiatives, visit the NSF website at http://www.nsf.org. You’ll find a complete listing of meeting announcements, summary of standards projects and draft documents.

About the author
Steve Williams is a project coordinator in the engineering & research services department of NSF International, of Ann Arbor, Mich. He started at NSF in 1990, and focuses on developing protocols and doing R&D work, including responsibility for all testing and protocol development under the EPA Guide Standard discussed above. He can be reached at (800) 673-6275 or email: williams@nsf.org.