Summary: Analyzing organic carbon contamination, either microbial or synthetic, is a concern of many water and wastewater treatment laboratories. This analysis can cause particular difficulties when the sample matrix contains brines (industrial process waters) or lower levels of salts (salt-water intrusion of municipal freshwater supplies). The following provides test results of a total organic carbon (TOC) analysis and shows the dynamics of a TOC analyzer as well as its limitations.

Typical uses of total organic carbon (TOC) analysis in water samples include measurements of microbial contamination and chemical hygiene. To eliminate common positive interferences, the inorganic carbon (IC), defined as dissolved carbon dioxide, carbonate and bicarbonate of the sample, is removed. IC is removed by acidification with an inorganic acid followed by sparging (gas-stripping) with a carrier gas of hydrocarbon-free compressed air. Following the removal or measurement of IC, an oxidation step converts the remaining non-volatile organic carbon in the solution to gaseous carbon dioxide. A detector measures the amount of carbon dioxide and applies that result to a calibration curve to attain a TOC value.

The concentration of organic and inorganic carbon in samples containing sodium chloride (NaCl) is of considerable interest to various laboratories. Coastal cities find the intrusion of seawater into their fresh water supplies. Many chemical manufacturers must analyze process waters that contain salt. These samples of brine solutions cause a significant challenge for TOC analysis. A catalytic combustion TOC analyzer provides one of the few ways of measuring TOC in brine solutions accurately. Other methods, such as persulfate oxidation, offer severe interference from the high level of chloride ions. The first step in this particular analysis was to determine the maximum sample load of brine solution that could be analyzed for TOC before analytical problems occurred.

Experimental
A high sensitivity, combustion TOC analyzer was used for measuring brine samples (28 percent NaCl), spiked with a carbon standard of potassium biphthal-ate (KHP), until data failed an accuracy criteria of 80-to-120 percent recovery of the KHP standard. A platinum catalyst, quartz combustion tube and a new halide scrubber were installed on the analyzer before analysis began. Three-quarters of an inch of quartz wool was packed below the recommended 20 grams (g) of catalyst used in the combustion tube. One-quarter of an inch of quartz wool was packed above the catalyst. The copper and tin of the halide scrubber were replaced every 100 injections of 28 percent NaCl solution to protect the non-dispersive infrared (NDIR) detector cell liner from halide buildup, which could cause corrosion and poor results.

The average results were monitored for accuracy compliance of 20 for the 1 part per million of carbon (ppm/C) in a KHP/28 percent NaCl solution. A 10 percent accuracy window was used for the 1 ppm/C and 5 ppm/C KHP standard for calibration verification during analysis of samples. The sample analysis was performed in the order listed in Table 1.

Method parameters
To maximize the amount of brine samples analyzed on a TOC analyzer, the sample volume injected into the combustion tube for oxidation was reduced. During a typical TOC oxidation step, the carrier gas is turned off after the sample is injected into the combustion chamber to allow for expansion of the liquid sample into a gas. This process isn’t used for brine samples to prevent salt buildup on the inlet of the carrier gas, which would restrict carrier gas flow during analysis. Since halides and other ionic solutions are interferences that can damage detectors of TOC analyzers, halide/corrosive scrubbers are employed in analyzers to prevent these interferences from reaching the detector.

The analyzer has the ability to be calibrated from 0-to-5,000 ppm/C. The calibration curve shown in Table 2 demonstrates the low-level capabilities of the analyzer, calibrating from 0-to-5 ppm/C. 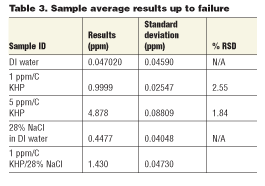 dramatically after the first failure, as observed in the higher standard deviations and percent RSDs. In addition to the decreased reproducibility, occasional sample replicate outliers yielded poor peak integration. As the precision decreased, the number of poor sample integrations increased, which eventually caused the accuracy to fail.

total of 23.016 grams (g) of NaCl was ran for TOC analysis before the standard fell out of the 20 percent accuracy window.  At this rate, typical duplicate analyses would last for 164 samples using 0.2 milliliters (mL) sample injections per replicate before the 23.016 g of NaCl limit is achieved. The analysis would last four days, averaging 40 brine samples (28 percent NaCl) per day before the 23.016 g of NaCl limit was achieved. (The KHP standards prepared in reagent grade water analyzed between brine samples weren’t needed in the salt injection count.)

The TOC analyzer has the impressive ability to run brine samples (+20 percent NaCl) and accumulate up to 23.01 g of NaCl in the combustion tube before standards and samples fail accuracy criteria. The warning signs of salt overload are poor precision and peak shape of sample integrations. The same sample load criteria can be applied to samples with lower amounts of salt such as seawater (3-5 percent NaCl). 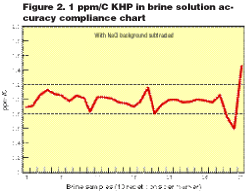 Conclusion
The TOC analyzer used in this study found that increased deposition of salts onto the catalyst eventually causes incorrect response for organics at about 23 g of NaCl. Therefore, to allow a safety factor for the analysis of salty samples, the analyzer could tolerate a maximum of 15 to 20 g of NaCl before the combustion tube and catalyst must be cleaned. Both combustion tube and catalyst should be cleaned with 2 N HCl solution and reagent grade water. The combustion tube, o-rings and injection port should be inspected for aging and salt buildup when cleaned. Fresh quartz wool should be used after each cleaning. A reconditioned catalyst has been tested under the same experimental conditions. The data generated with a reconditioned catalyst found to be comparable to data generated with this new catalyst.

About the author
Brian Wallace is an applications chemist for Tekmar-Dohrmann, of Mason, Ohio. He has been involved with the release and development of the latest generation of TOC analyzers—the Phoenix 8000 (UV/Persulfate) and the Apollo 9000/9000 High Sensitivity (Combustion). He can be reached at (513) 229-7068, (513) 229-7050 (fax), email: [email protected] or website: www.tekmar.com