Removing THMs by Membrane Contractors in a UPW Plant

Summary: An ultrapure water treatment (UPW) plant recently faced the problem of removing THMs from its water supply. THMs pose a greater risk in pharmaceutical and semiconductor industries where the slightest contamination results in serious problems. This article details how membrane contactors are used to minimize THMs.

and bromoform (CHBr3). Total trihalomethanes (TTHMs) are measured as the total concentration of these four components. Table 1 indicates the physical properties of THM compounds.

Chloroform is the THM of greatest health concern at this time. There have been studies that suggest a connection between this and bladder and possibly colon and rectal cancer. THMs persist through the distribution system and may be present in tap water. Current World Health Organization guidelines require water systems to use treatment methods to reduce formation of THMs to the following:

Trouble applications
In addition to health implications, THMs pose a challenge to pharmaceutical and electronics industries where such impurities cannot be tolerated. THMs and other halogenated organics can be removed from city water by adsorption with granular activated carbon (GAC) filters to a fair extent; however, THM reduction by this method isn’t satisfactory due to short service cycles. Use of ozonation has been reported to be an effective means of controlling THM levels in high-purity water treatment plants. THMs, being of low molecular weight, don’t reliably undergo removal by reverse osmosis (RO) filtration. Ultraviolet (UV) light technology—at the 185 nanometer (nm) wavelength—cannot modify chloroform to yield an ionic entity capable of ion exchange removal.

The carbon-chlorine bond is more stable than the chlorine-bromine bond. THMs containing bromine are decomposed by the action of UV radiation. The resulting bromide ions lower the resistivity of the water.1 Their boiling points are close enough to that of water to render them difficult to separate from water even by distillation, particularly at trace levels. Vacuum degassification is promising for the lighter THMs, but less encouraging for their heavier analogues. Membrane contactors 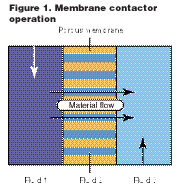 High-purity water treatment facilities adopt various techniques to achieve sub-ppb levels of total organic carbon (TOC) concentration. It’s important to note that THMs are the most difficult to treat organic impurity present in such water streams. THMs decompose and release bromide and chloride ions, which are known to stimulate the corrosion of metallization layers and cause adhesion and etching problems.

In the semiconductor industry, organic compounds present in the rinse water can affect device yields and electrical characteristics. Haze or irregular gate oxide densities are attributed to organic impurities in semiconductor rinse waters. Current ultrapure water standards for electronics and semiconductor industries (ASTM D 5127-99, Type E-1.2) specify a TOC content of less than 1 ppb for water that contacts the water surface during processing. In the power industry, organics can cause corrosion problems in boiler operations. For the Water For Injection (WFI) method used by the pharmaceutical industry, the organic content must be below the level detectable by the United States Pharmacopoeia (USP) oxidizable substances test performed with acidic potassium permanganate solution. Meanwhile, USP 24 requires a TOC level of below 500 ppb.

Working principle
Membrane contactors employed in the present experimental study use hydrophobic hollow-fiber polypropylene microporous membranes.2 Hollow fiber modules are made by potting the desired number of fibers into an external shell. The potting compound is epoxy. Flow outside of, but perpendicular to, the fiber bundle offers reasonably fast mass transfer and this geometry is chosen in the membrane contactor unit. Since the membranes are hydrophobic and have small pores, water will not easily pass through the pore. The pressure required to force water to enter the pore is called the bubble point pressure. The procedure for a bubble point test is described in ASTM Method F 316. The relationship between pore size and bubble point pressure is based on the application of the Young-Laplace equation. The smaller the pore diameter, the greater the bubble-point pressures.3 A commonly used form of this equation is:

Volatile solutes can pass across these membranes, but non-volatile solutes like electrolytes are completely retained. High flux occurs when the solute is volatile and relatively insoluble in water.

Gas and water
Henry’s Law describes the stripping of various dissolved gases from water. It states the amount of any given gas that will dissolve in a liquid at a given temperature is a function of the partial pressure of the gas that’s in contact with the liquid and the solubility coefficient of the gas in the particular liquid. A simple example of the way in which Henry’s Law works can be seen when a bottle of carbonated water is opened. Opening the container releases the pressure suddenly, causing the gases in solution to come out of the solution and to form bubbles.

According to Henry’s Law, the amount of gas that will dissolve into water at equilibrium is proportional to its partial pressure in the vapor phase in contact with water:

The treated water from the carbon filter is taken to a 1-µm cartridge filter for the removal of fine solids. Spiral wound polyamide composite membranes are used for removal of ionic impurities and organics. Permeate from the second pass RO system is taken to the permeate tank. From the permeate tank, water is pumped through the primary UV TOC reducer for organic content reduction. Water from the primary UV TOC reducer passes through a CEDI unit and a primary mixed bed for further reduction of ionic impurities. After this, water passes through the membrane contactor to reduce dissolved oxygen (DO) levels. In addition to DO removal, it’s expected to remove some volatile organics including THMs. Details of the primary membrane contactor, the centerpiece for the present experimental study, are given in Table 2. 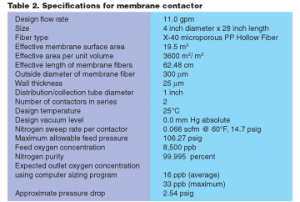 Nitrogen sweep rate and vacuum level
Effect of flow rate and vacuum level on THM removal by a membrane contactor was studied earlier.4 Using the experimental set-up described previously, a series of experiments was conducted at various nitrogen sweep rates and vacuum conditions at a constant flow rate of 11 gallons per minute (gpm) in the present study. It was observed that the concentration of dibromochloro-methane, 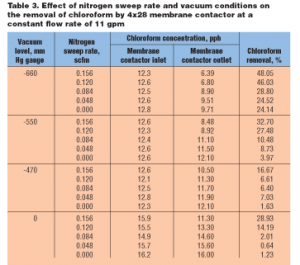 dichlorobromomethane, and bromoform at both the membrane contactor inlet and outlet were always below the instrument detection limit of 0.5 ppb. Table 3 shows the influent and the effluent chloroform concentrations as a function of different nitrogen sweep rates and vacuum levels. Flow rate was kept constant at 11 gpm. Inlet chloroform concentration to the membrane contactor was 12.0  to 17.0 ppb. The efficiency with which a contactor can remove chloroform from water is typically used here to describe its performance. The percentage of chloroform removal is defined by the following equation:

The data in Table 3 indicate that nitrogen sweep rates and vacuum levels strongly affect the removal of chloroform by a membrane contactor. It’s important to note the consumption of nitrogen is indicated for two membrane contactors in series. Improvement in chloroform removal at higher nitrogen sweep rates and vacuum levels can be related to efficiency of mass transfer operation.

Measurement of THMs were performed off-line by a gas chromatography/mass spectrometer (GC-MS) system for THMs above 5 ppb and a gas chromatography/electron capture detector (GC-ECD) system for THMs in the range of 0.5 ppb to 5.0 ppb. The GC-MS system consists of Hewlett Packard’s HP 6890 GC equipped with HP 5973 MSD under the control of HP Chemstation software. This system uses helium as the carrier and the purging gas. The GC-ECD system consists of HP 6890 GC equipped with HP-ECD detector under the control of HP Chemstation software.

Conclusion
Increase in the nitrogen sweep rates and vacuum levels improves the chloroform removal efficiency of membrane contactors. Up to 48 percent removal efficiency was obtained in the present study. This provides vast improvement in the production of semiconductor and pharmaceutical industries where such ultrapure water is key to efficiency.

About the authors
Avijit Dey is research and development manager of Chemitreat Private Limited, of Singapore. He has 13 years experience in the field of water and wastewater engineering. His current research responsibilities include ultrapure water production and waste recycling in the semiconductor industry. He holds a doctorate in chemical engineering from Jadavpur University, India. He has published over 30 scientific papers in reputed journals.

Gareth Thomas is managing director of Chemitreat. He has 20 years experience in the field of water and wastewater engineering. His current research responsibilities include ultrapure water production and waste recycling in the semiconductor industry.

Tao Guihe holds a doctorate in environmental engineering from Tongji University, Shanghai, China. He has 15 years of experience in water and wastewater engineering. Dr. Guihe is an industrial research scientist in the Ultrapure Water Production & Recycling Section in ETI. His current research responsibilities include ultrapure water production, wastewater reclamation and recycling. He can be reached at email: ghtao@eti.org.sg