Pulling Water from the Air: Part 1—An Above-the-Ground Alternative

Summary: People often look underground for water sources to furnish the multitudes of Earth’s inhabitants. It seems like no one bothers to seek higher ground, and we’re not talking about mountaintops either. No, the discussion here is about the atmosphere and how it can serve as a viable source of water when using the right technology. Another company’s approach to this topic will be featured in next month’s issue of WC&P.

As everyone knows, availability of safe drinking water worldwide is a continual problem with no solution in sight considering the world’s rapidly growing population and resultant needs. Desalination plants, reverse osmosis systems and countless other water treatment systems are available to the end-user. But none, individually or collectively, solve drinking water problems on a universal scale. Plus, they all need one thing in common—a conventional water source that can be treated to acceptable drinking water levels. Aside from desalination, conventional water sources themselves are becoming depleted and scarcer.

It’s well known that the atmosphere holds enormous amounts of potential drinking water. At any given moment, the Earth’s atmosphere contains 4,000 cubic miles of water, which is just 0.000012 percent of the total of 344 million cubic miles of water on the planet. Nature upholds this ratio by accelerating or retarding its rates of evaporation and condensation. This “hydrologic cycle” is the primary means of regenerating wholesome water for all forms of life. It’s an inexhaustible water source in countless areas of the world. Patents addressing the concept of extracting water from air go back to at least 1917, but it’s only in the past 10 to 15 years that truly viable systems using modern technology have begun to proliferate.

Birth of an idea
One system was devised in 1986. One evening, the inventor poured the contents of his brand new dehumidifier in his basement down the drain, and it occurred to him that the water looked very appealing and pristine. He took a drink and it tasted fine. Addressing many considerations as to airborne contaminants and potential recontamination, several patents were obtained by the inventor in the early 1990s related to extracting safe drinking water from air. Subsequently, additional patent applications have been filed and are pending in the United States and other foreign countries. 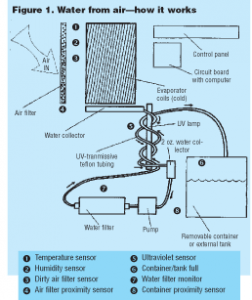 —as well as all other attempts at this concept—uses traditional refrigerant systems. Water is collected as it drains off the evaporator coils and diverted into an internal holding tank of various sizes for subsequent treatment by a variety of methods. This system differs in that it instantly sterilizes the incoming water as it enters the unit by intense ultraviolet (UV) exposure, thereby preventing the mixing of sterile and unsterile water within the device. All other attempts at this filter the water before it’s discharged to the end user. Some use either UV or ozonation for sterilization. Some treat the water only as it exits the unit and others perform a continuous sterilization and filtration cycle of the water in a permanent, internal, holding tank. This system differs in that it immediately filters its captured sterile water through a 1-micron activated carbon block in as little as two-ounce quantities. This filtered water is then passed by a second UV exposure and channeled to a removable 2-gallon water dispenser, which is designed to be placed in a refrigerator or water-dispensing unit. The time it takes to fill the dispenser depends on a couple of conditions. For example, at 80°F and 60 percent relative humidity, it would take approximately 9.6 hours. Other water generators may include internal means to chill and/or heat the water, which is held in permanent, internal reservoirs.

Covering all bases
Regardless of the methods used in treating this condensed water, it’s imperative that the system components work properly at all times. Reliability depends on individual users performing scheduled maintenance and periodic replacement of water filters and UV bulbs on a consistent basis. Mechanical things may ultimately break and electronic devices often fail. People don’t usually conduct voluntary maintenance on schedule.

It’s difficult, if not impossible, to determine when a water filter has reached its rated quantity of filtered water. The same is true when a UV bulb—which can glow for up to 20,000 hours or more—has lost its sterilization ability (commonly at 8,000 to 9,000 hours). Simply changing the filter or bulb at fixed intervals such as every 12 months doesn’t ensure the water has been treated adequately. All of these factors present potential problems because devices might be used worldwide in varied environments by people of vastly different capabilities or appreciation for the demands of maintaining a functional water treatment system.

Some systems rely upon the end-user for maintenance. Some use service contracts. Some have rudimentary monitoring devices that detect active electrical current to the UV with the assumption that the UV bulb is working and, therefore, sterilizing. This isn’t always the case. Simply having a water treatment system that’s safe to use when properly working isn’t good enough. The device itself has to be safe to use—by anybody, at any skill level—in any environment. Continued research and field testing of the system produced several patented functions to accomplish this fail-safe operation.

Distinguishing itself
The system’s most basic difference from other water-generating units is that it never holds untreated water within its system and never mixes treated and untreated water in the same holding reservoir. This is because it may hold the water for any period of time, which may enable uncontrolled growth of microorganisms in the untreated water within the device. This gravity-fed treatment system sterilizes the incoming water within six seconds of its capture and promptly filters it in two-ounce increments. The system also includes a small computer tied to an array of specialized sensors that also monitors:

Because humidity levels and temperatures change daily and continuously, it’s not possible for the user to predict water production rates with any certainty. It may also be difficult to determine when to operate the unit for its best performance. Rather than simply turning the unit on or off, all models have an efficiency mode of operation. While in this mode and inactive, one particular model will draw in a sample of the ambient air every 20 minutes and measure the ambient temperature and humidity. It then computes the rate of water that it can produce. If it can produce water at the rate of five gallons or more per 24 hours, it will activate and continue to operate until it detects the production rate falling below the minimum, at which time it will shut itself off. This enables the user, even if absent, to automatically produce water only during the best possible times and minimize operating energy costs. An override mode enables the user to operate the system at any time, even if it will only produce four gallons or less per day. In both cases, the model will shut down when the container, or external tank on larger sizes, is full.

Gauging conditions
Production capacities claimed by water-generating devices vary greatly. Care should be used in comparing water condensation devices. It’s important to know, and commonly difficult to obtain, the conditions of temperature and humidity on which each claim is based. In the United States, a voluntary reference point of 80°F and 60 percent relative humidity is most commonly used within the HVAC industry, and this is what the system uses in all its models’ claims. Other claims most often use foreign or tropical standards or even arbitrary reference points, which may be as high as 90°F and 90 percent relative humidity on which to base their water production capabilities. Clearly, it’s not easy to compare devices using different standards. A fair comparison of water production requires rating them at identical ambient conditions, since any unit will make far more water at 90°F and 90 percent relative humidity than it will at 80°F and 60 percent.

Unfortunately, desert climates where drinking water is scarce to start with generally have low humidity, while places that have high humidity also have plenty of rain—where the need for such a device may not seem to be as great. It should be noted that the system will work in many areas of the world that may be surprising to most people. The Persian Gulf, for example, is commonly considered to be an arid climate, but in fact is very humid and an ideal location for extracting water vapor from air. Even tropical areas with excessive rainfall, such as the Philippines, have little or no access to safe drinking water. This system provides a new alternative for both extremes.

Conclusion
Producing drinking water from the air isn’t a universal solution to the world’s problems discussed above, but it does provide new opportunities for millions of people in various places with little or no alternatives. Plus, it’s a convenient and economical choice for those currently choosing bottled water as their primary preference.

About the author
James J. Reidy, of Holden, Mass., is the inventor and developer of WaterStar, a device which is described in this article. He has 16 years of research and development experience in this concept and holds four U.S. patents with several more pending in the United States and other countries. All but the 5-gpd unit are built to order. Reidy may be reached at (508) 829-6550, email: jjreidy@tiac.net or website: www.tiac.net/users/jjreidy