The Prevalence of Nitrate Contamination in the United States

Because of its widespread occurrence, the inorganic compound that’s perhaps of greatest concern in groundwater is nitrate. In general, states report data for nitrate more frequently than for any other parameter and it’s second only to petroleum compounds as the most prevalent groundwater contaminant.

In 1962, the U.S. Public Health Service set a recommended limit for nitrates at 10 milligrams per liter (mg/L) based on the best available health information. In 1974, Congress passed the Safe Drinking Water Act, requiring the U.S. Environmental Protection Agency (USEPA) to determine the safe levels of chemicals in drinking water based on exposure and health risks. From this information, a health risk level below which there’s no known or expected risk to health — the Maximum Contaminant Level Goals (MCLG) — and an enforceable standard — or Maximum Contaminant Level (MCL) — are set according to the ability of public water systems to detect and remove contaminants using suitable treatment technologies. The MCLG and MCL for nitrates are both set at 10 mg/L.

Well-documented problem
In 1990, the USEPA National Survey of Drinking Water Wells found that approximately 57 percent of private wells tested contained detectable levels of nitrates, with 2.4 percent exceeding the MCL. Because public systems can serve large populations, this level of contamination impacted large numbers of people. In 1994, approximately 500,000 people drank tap water from systems in violation of the MCL for nitrate. An additional 3.8 million people reportedly drink from private wells that exceed the MCL.

Most recently, in the “National Water Quality Inventory: 1996 Report to Congress,”1 12 states specifically referenced nitrate-nitrogen as a widespread and significant cause of groundwater contamination. Of the 15 states reporting detectable nitrates, nearly 50 percent violated the USEPA regulatory limit. This percentage is even higher for states reporting data from private/unregulated wells, where 90 percent of those reporting exceeded USEPA regulatory limits.

Sources and distribution
Nitrate pollution is probably the most geographically objective pollutant on the USEPA contaminant list, and affects drinking water supplies in 40 states. In addition, use of nitrate fertilizers may be higher in rural areas of America where private wells dominate the water supply sources.

Regions most affected by nitrates and nitrites in the environment are demonstrated in Figure 1. 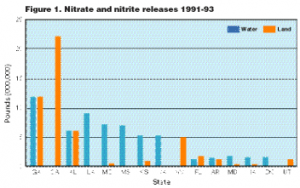 California, Georgia and Alabama report the highest concentrations of nitrate and nitrite releases to land while Georgia, Louisiana and Missouri are top on the list of water releases from 1991-93.

From 1991 to 1993, 112 million pounds of nitrates were released to U.S. waters and lands. Because of their high solubility, nitrates and nitrites migrate easily in groundwater until consumed by plants or other organisms. Nitrate is converted to nitrite in the human body. Utilized as a major agricultural fertilizer, nitrate concentrations in the environment are unlikely to decrease anytime soon. Although agriculture is the major source of nitrate pollution in the environment, other potential sources to target for control include sewage and septic disposal systems, livestock facilities, fertilized crops, parks, golf courses and lawns, and natural environmental sources such as decaying plants and animal residues. In addition to fertilizer industries, numerous others contribute large amounts of nitrate to soil and water, including paper and pulp mills, canned food, inorganic and organic chemical production, and metal ore production.

Potential health effects
The conversion of nitrate to nitrite in the body interferes with the oxygen-carrying capacity of the blood. Specifically, the nitrite oxidizes iron in the hemoglobin of red blood cells to form methemoglobin, a compound lacking the oxygen-carrying ability of hemoglobin. This condition is known as methemoglobinemia. Most humans over one year of age have the ability to convert methemoglobin back to oxyhemoglobin but, for infants, the condition can be quite serious. Infant gastrointestinal systems are underdeveloped and secrete lower levels of gastric acid. The resultant increase in pH may enable bacteria levels to rise. In the gut, bacteria transform nitrates into harmful nitrites. In addition, the natural human enzymes for reducing methemoglobin are underdeveloped in infants.

Sometimes called the “blue-baby syndrome,” effects of nitrate exposure in infants may manifest over a period of just days, with symptoms including shortness of breath, blueness of skin, and possibly death. Cases of methemoglobinemia are extremely rare. From 1945 to 1971, there were 2,000 cases reported in North America and Europe, with death resulting in approximately 8 percent of cases. From 1960 to 1971, only one death was reported.

In addition to infants, older persons with gastrointestinal disorders or impaired enzyme production systems are at greater risk. Long-term exposures to nitrogen in adults can lead to diuresis and hemorrhaging of the spleen. Pregnant women are also at increased risk of spontaneous abortions and potential birth defects from high nitrate water, and nursing mothers are cautioned against drinking water high in nitrates as it may be passed to infants via the breast milk.

Although older children and adults can tolerate higher levels of nitrates, little is known about the possible long-term effects of nitrate consumption. Some evidence suggests that nitrate exposure above the MCL may be carcinogenic. Thus, it’s recommended that all persons avoid drinking water high in nitrates.

Preventing exposure
The initial defense against nitrate exposure is proper placement of domestic water wells. Water sources should be up-slope and at the greatest possible distance from livestock, fertilization, waste disposal, or other activities known to contribute to nitrate contamination as well as a variety of other potentially harmful contaminants. Drinking water distribution systems should be properly constructed, monitored and maintained.

Drinking water sources suspected to be impacted by nitrate contamination should be tested quarterly or yearly. Nitrate levels may vary seasonally and are highest following periods of increased snow melt or rainfall events, enabling the soluble nitrates to migrate to nearby water supplies. Without monitoring, nitrates are undetectable in water because they are tasteless, odorless and colorless. If an infant, pregnant or nursing woman, or an elderly person lives in your household, the water should be tested for nitrates. Public water systems serving at least 25 people are required by the USEPA to test their water at least annually for nitrate contamination.

Conclusion
Nitrate can be removed from drinking water by distillation, reverse osmosis and anion exchange processes. Many point-of-use devices utilize these technologies and are effective at treating waters known to be high in nitrates. Conversely, carbon adsorption filters, many types of mechanical filters, and standard water softeners don’t remove nitrates. Boiling water alone isn’t an effective treatment for nitrate contamination and may, in fact, worsen the problem by increasing the concentration in the final product water.