Making It Work in a Small Town: Diversity in Iowa with Pelham’s Water Conditioning Service 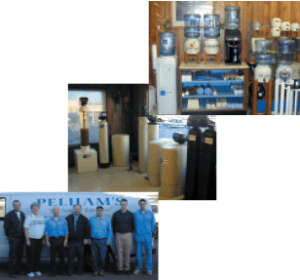 Rick Tuvell knows that name recognition goes a long way in the water treatment business, especially when your main customer base is 26,000. Such is the case for Tuvell, owner of Fort Dodge, Iowa-based Pelham’s Water Conditioning Service as well as a former police officer. Both professions also rely on the public’s trust.

“The name recognition we have matters. Customers who came to us long ago are parents now. Eventually, their kids will ask the parents about the equipment once they move out on their own,” Tuvell says.

Picking up the pieces
That largely explains why Tuvell keeps the Pelham name attached to his business. He also recognizes the power behind consistency in a name. In 1949, Earl Pelham opened a shop and began selling water treatment equipment in the area. In the late ’70s, Pelham decided it was time to get out of the industry and sold the business to Tuvell’s father. In 1982, the father fell ill and passed away. Soon after, Rick bought the business from his mother.

Pelham’s carries a wide selection of water-related products including reverse osmosis (RO) systems, softeners, carbon filters, salt delivery and water coolers. Eighty-five percent of the business is residential-based and the remainder is commercial. Pelham’s both sells and rents softeners and bottled water coolers. The softeners are manufactured by USFilter and Wood Brothers, the ROs come from Water Factory Systems, and the water coolers are made by CORDLEY®/Temprite®. Some of these business relationships have been in place for over 20 years, he says. 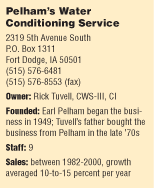 As an independent water treatment dealer, the 54-year-old Tuvell says, “We can pick and choose our equipment that we feel is best for our customers instead of having to select from one product line.”

Riding the wave
Along with ROs, Tuvell notes one other product that has really taken off in popularity for his business — bottled water. “Back in the mid-1980s, I could see that bottled water was in its infancy much like water softeners were in the ’50s,” he says. “We only got involved in bottled water after we moved to a new location because we didn’t have the room before. It has increased 10-12 percent every year for us. It has helped us to diversify and provide another product to our customers. We already had the delivery routes established so the transition worked well.”

In fact, the water cooler line has — to a great extent — allowed Tuvell to keep from losing substantial revenues even during times of a sagging economy. Between 1982 and 1998, Pelham’s tripled its rental business and sales numbers with an average growth rate of 10-15 percent a year, Tuvell says. The numbers for 2000 were 12 percent more than 1999. For 2001, Tuvell looks to break even but knows that certain events made it a very unique year.

“The economy was kind of going downhill before (Sept. 11), and that didn’t help the situation. Also, the stock market — and the way it was — played a role. Plus, everyone is holding on to their money and waiting to see what’s going to happen,” he says.

Lemonade out of lemons
Regardless of the economic calamity, Tuvell sees great opportunities for the business. With a staff of nine, Pelham’s carries 9,000 accounts with an expected spike in both numbers. The staff breaks down this way — three administration personnel, one part-time salesperson, one office person, two delivery people, one service person and one person who works solely on softeners and coolers. He adds, “There’s room for improvement. To do that, we’ll have to put some more people on staff in the form of sales people and service people.”

Before the economy started downward early last year, Tuvell had hopes of adding to his present 6,000 square foot facility or even obtaining a new facility altogether. He’s still looking at either option. Pelham’s will need the space since Tuvell plans to increase his commercial accounts, which now include manufacturing and restaurant/foodser-vice firms. He adds, “We would like to grow in the industrial end of it.”

Sixty percent of Pelham’s customers are on municipal water and the others mostly draw from wells. Hardness in northern Iowa can run from 3-4 to 100 grains, and the pH is normal. Tuvell will usually resort to a water softener to remove iron. If the iron content is in a higher range, he will add a filter before the softener. The terrain near Fort Dodge is flat but, with Iowa being an agricultural state, bacteria and nitrates get into the well water via hogs, cattle and fertilizers in the ground. Tuvell remembers when years ago wells would be drilled and the runoff would be allowed to seep into the well. In addition, the water would be pumped back into the aquifer. He says work is currently being done to cap those troubled wells.

Through it all, Tuvell has always enjoyed a family atmosphere with regard to the business. He helped his dad as a high school student. When his father became ill, Tuvell was working as a police officer. About the same time as his father’s failing health, Tuvell also was confronting some health issues. “I saw where people needed good quality water and I thought it would be a good business to fall back on (when my father got sick). And then I hurt my back during my time as a police officer, so I wanted to get out of it because I didn’t want to see someone else or myself get hurt,” he says.

Tuvell was afforded the opportunity to retire after 15 years and then turned all his attention to the water treatment business. Even today, Tuvell’s wife, Janet, and stepson, Jeremy, are involved with the day-to-day operations of Pelham’s.

A board member of the Iowa Water Quality Association and a national WQA member, Tuvell says one of the main areas dealers should stress is educating their customers. Also, he adds, “A lot of dealers are concerned with the mass merchandising of drinking water systems, softeners, etc. They will have to become more service-oriented.”

Conclusion
Tuvell believes that faith in a dealer’s product and reputation — name recognition or not — will determine the success of the venture. It’s the same approach Tuvell took as an officer of the law, and he hopes to continue to earn the public’s trust in his water treatment business for many more years.