Measurement of Dissolved Ozone and the Development of a New Meter

By Lawrence B. Kilham 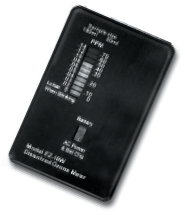 Summary: Measuring dissolved ozone in water is key to understanding its disinfecting capabilities. There are three different measurement points highlighted here. Using this information and understanding other useful properties of ozone, one company set out to devise a new method.

Ozone is generally dissolved in water to destroy bacteria, virus and other microorganisms, oxidize and thus create removable solids of dissolved minerals, and eliminate undesirable chemicals. It’s also used for other purposes such as allowing lower temperature wash water and to minimize residuals in wash processes ranging from laundry to semiconductors. Products are being launched for home use such as fruit and vegetable washers. In any case, ozone should be efficiently dissolved into the water, and the dissolved ozone should be measured at various points in the process.

Ozone measurement points
The ozone concentrations vary greatly from point to point. Ozone is often measured at one of the following three points in an optimized system.

1. At the injection point (“ozone dosage”): Measurement can be made in the water just after the injection point, although it’s sometimes preferable to measure the ozone in air just before the injection point due to practical difficulties in measuring dissolved ozone just after that point. In either case, care must be taken due to high pressures or vacuums, high ozone levels, high gas, or liquid flow rates and volumes. Usually hand-held ozone instruments shouldn’t measure ozone concentrations at this location. Specifically designed probes should be used to measure ozone concentrations at this location. One of the hazards of measuring the ozone dosage is that it’s unknown whether the dosage is higher or lower than the oxidation demand.
2. At the contact tank: Measurement can be made in the contact tank or contact chamber. In the contact tank, the ozone is designed to have prolonged contact with the water and its constituents, the dissolved ozone usually has its highest concentration, and the flow rates and pressures are often lower than at the ozone injection point. On-line instruments or portable instruments analyzing samples from taps (faucet or spigot) can generally be used to measure ozone at this location.
3. At the exit of the system (but before any dissolved ozone destruction unit): This is the point where the residual dissolved ozone may be measured. Here, samples can be taken from water bottles, swimming pools or spas, vegetable washing areas, cooling towers, etc. This is generally an ideal measurement point for hand-held sampling instruments, but on-line instruments can also be used. Ozone concentrations and water pressures are usually much lower here than upstream.

Critical stage
The residual dissolved ozone is a critical measurement because it indicates that:

There are many ways to measure dissolved ozone, but they’re all frustrating. The most common ones are ORP meters, indigo test kits with a colorimeter readout, and electrochemical sensor instruments. ORP isn’t specific for ozone and can be equally influenced by any oxidizing agent in the water such as chlorine. The indigo test kits give good specific ozone readings in the hands of skilled technicians but can be misused by others. The electrochemical sensor instruments work well if they’re constantly maintained, because their probes are easily damaged and probe-sensing characteristics can change. After any two methods are tried side by side, the results often differ dramatically. 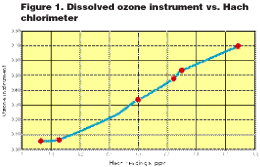 A new method
One company thought there must be a better way. A new invention was necessary. The new book, Great Idea to a Great Company—Making Inventions Pay,2 recommends starting with a vision that ties a new product approach with an identified market need. The book says to look for the connection of everything: “Engineers, scientists, and academics may despair when trying to analyze everything with many apparently unrelated variables, but it’s perfectly okay for you to do this in pursuit of a new product.” The breakthrough product vision is often the hard part of the invention; another difficulty is perfecting the product.

Why not extract the gas to be measured out of the water before measuring its concentration so that chlorine, salt and other chemically active agents wouldn’t alter the measurement? While gas extraction from liquids is well known to chemical engineers as “stripping,” it’s not generally used in low-cost, hand-held instruments. The gas is stripped by vigorously shaking a capped and partially filled sample bottle. This approach keeps the probe out of the water and doesn’t require special reagents.

An obstacle arises
Taking a leap of faith, this presented development obstacles that looked insurmountable at first. The biggest problem was protecting the micromachined solid state sensor from splashes of water. These would numb or destroy it. The solution was putting a membrane barrier between the water and sensors. This entailed trying all kinds of membranes until one was found, which efficiently transmitted ozone but completely blocked the water. Finally, one was found which turned out to be made by a material developed at great expense for an unrelated application. 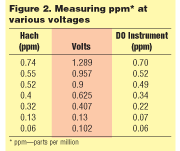 A custom-made dissolved ozone lab was purchased from an ozone generator manufacturer. A science student was hired as a summer intern to do hundreds of dissolved ozone measurements using ORP, electromechanical instrumentation and indigo test kits against experimental designs. Computerized instant data plotting was a great time saver, and hundreds of plots were produced. The data indicated a reliable design. Figures 1 and 2 show a typical plot of the instrument vs. a Hach DR/850 colorimeter using an indigo trisulfonate test and a comparison at different voltages between the two products, respectively.

A pre-production prototype was built and tried at a swimming pool, a kitchen tap water ozonating unit, and a local water bottling plant. The prototype almost never agreed with the ORP meter because chlorine in the water affected the meter. The prototype, however, did agree well with indigo test kits, which are standard at many sites. Units sent out to customers for beta site testing also worked well. The product was announced at September’s International Ozone Association meeting in London.

Conclusion
There’s a great future just beginning for ozonated water products such as applications for the home, and the industry looks forward to participating in these advancements as they develop. It will require all kinds of new ozone products designs, but they are within reach.

About the author
Larry Kilham is president of Eco Sensors Inc., of Santa Fe, N.M. The company produces ozone instruments including its new model EZ-10W for dissolved ozone. He has several patents and has just completed a book based on his and his family’s businesses, “Great Idea to a Great Company—Making Inventions Pay.” He can be reached at [email protected]