Countercurrent Regeneration of Softeners: Weighing the Pros and Cons

Summary: Countercurrent regeneration is a method that has tried unsuccessfully to get into the mainstream of the water softening industry. Despite various application strategies, it’s often dismissed as too complex and with little value in brine savings. Time will tell if other issues such as salt and the environment make the technique practical. 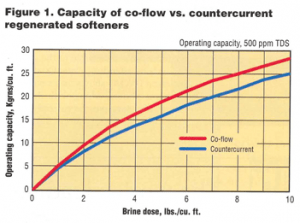 So, why bother with a more complicated regeneration if there’s very little benefit? A deeper look at ion exchange theory may help us to take full advantage of all the benefits. Hardness leakage is quite low in counter-currently regenerated softeners, even at salt doses less than 4 lbs/ft3. This allows a counter-currently regenerated softener to use a low salt dose, and still produce “zero soft” water. Low-salt doses are always more efficient than high doses. The advantage in salt efficiency by operating at a 3-lb dose instead of 6-lb dose is around 10-to-15 percent. The overall benefit of using a low-salt dose and countercurrent regeneration is a 15-to-25 percent improvement in efficiency. This can result in as much as savings of a third in salt usage. 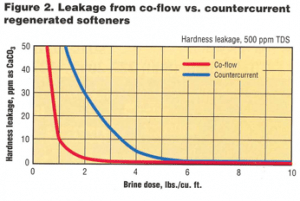 Lower salt doses result in lower operating capacities, which lead to larger softeners and higher prices. Savings in the purchase cost of salt cannot pay back the increased cost of the softener system in a reasonable time. This undoubtedly has a lot to do with the softening industry’s reluctance to embrace countercurrent softening; however, with the present environmental concerns about salt discharge, the economics in some areas now include added costs for brine discharge. This may well produce a climate where countercurrent regeneration will be embraced by the softening industry as not only more efficient, but more expedient.

Problems with regeneration
The fundamental principle of countercurrent regeneration is that the least exhausted portion of the resin should contact the freshest chemical first. This resin is completely regenerated. The highly regenerated portion of resin must remain close to the outlet collector in order to provide the low leakage promised by countercurrent regeneration. If the resin bed fluidizes, the beads will mix and the countercurrent leakage effect will be diminished. Worse, if the resin fluidizes during the brine injection, the sodium ions in the brine won’t come close enough to the surface of the resin beads for the reverse exchange to occur. The result is a serious loss of efficiency. Unfortunately, this can result in a counter-currently regenerated softener that’s less efficient than a co-flow softener.

The problem of keeping the resin from fluidizing isn’t easy to overcome, and has been the downfall of many countercurrent regeneration schemes. Dilute brine is significantly heavier than water and, when applied upward through the resin bed, tends to fluidize the resin at much lower flow rates than are required for backwash. Larger industrial size softeners can be fitted with a chemical collector and blocking flow or split-flow techniques can be used to hold the bed in place. For residential softeners, however, the only really practical method that has yet been devised is to use a packed bed. The only practical method of countercurrent regeneration that has yet been devised for residential softeners is to use a packed bed.

In a packed bed, the tank is completely filled with resin with only a very small amount of freeboard. Since resin isn’t a very good liquid distributor, packed beds are susceptible to flow channeling. Another problem with countercurrent regeneration is 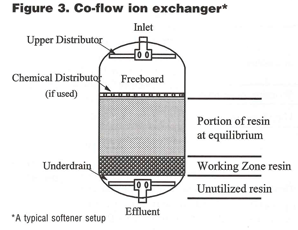 the necessary elimination of a backwash step. Since resins do get dirty, the chance of resin fouling is greater when backwashing is eliminated. Because packed beds don’t have any freeboard, it’s not practical to clean the resin inside the softener itself.

Countercurrent softeners usually have low-salt doses, since the major gains in efficiency come from reduced salt dose and not from countercurrent regeneration per se. Low-salt doses are less effective to remove foulants such as iron from the resin. This means that if there are foulants in the feedwater, a counter-currently regenerated system will be more prone to have problems due to fouling. Countercurrent regeneration is far less attractive for well waters than for municipal waters.

Here are a few strategies when utilizing countercurrent regeneration.

Downflow service/up-flow
This is the design that’s most similar to the typical household softener. Service flow is downflow. Brine injection and slow rinse are upflow. If the bed isn’t perfectly packed, it’s difficult to keep the resin fro 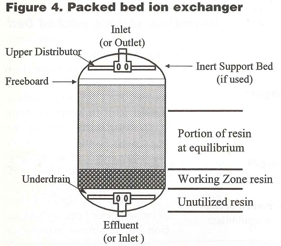 m fluidizing during the brine step. Contact time is the “Achilles heel” of an upflow-regenerated, packed-bed softener.

A very low upward flow of brine doesn’t cause fluidization but is almost impossible to control and doesn’t provide decent distribution. As brine flow increases, fluidization occurs. As brine flow increases still further, the brine flow packs the resin against the top distributor, but brine injection time can be as short as five minutes! The high flow results in very short contact time while the very low flow results in poor distribution. Brine flow rates in between cause fluidization. Unfortunately, there doesn’t seem to be any easy solution to this dilemma.

Up-flow service/down-flow
This is the opposite type of packed bed. Because the service flow tends to fluidize the resin, it cannot tolerate repeated start-stop operation unless the resin volume perfectly fills the entire softener tank. On the plus side, since the brine is injected downflow, there’s no potential loss of efficiency in this step. Because the smaller resin beads and fines migrate to the top of the resin bed and surround the outlet strainer, this design is prone to problems with high-pressure loss and/or low flow.

Down-flow service/up-flow brine
This type of counter-currently regenerated softener is almost never used for residential softeners, but is the most common 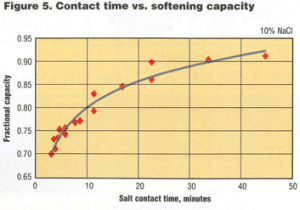 design for industrial softeners that are counter-currently regenerated. This is because the design requires a brine collector located right at (or slightly below) the surface of the resin bed. The fiberglass tanks used for residential softeners aren’t easily fitted with a connection in the side of the tank, and the control heads aren’t designed to accommodate the addition of blocking flow. The advantage of up-flow brine with blocking flow is that backwash can be accommodated when necessary. It should also be noted that about half of the industrial softeners built with blocking flow are eventually converted back into co-flow softeners.

The concept of blocking flow is fairly simple. A flow of water (or air) is brought into the top of the softener simultaneously with the flow of brine being brought into the bottom. Brine and blocking water both exit the softener through the brine collector. The resin is prevented from fluidizing by the blocking flow. The collector is generally buried in the resin bed (about 6 inches deep) so that some “inactive” resin acts as a cap to help keep the rest of the resin from rising up above the collector.2,3,4,5

There are two noteworthy variations to the theme of blocking flow. Air can be used instead of water to prevent the resin bed from fluidizing. Air block systems save on wastewater volume. The tank must be drained to the resin bed before starting the brine step and refilled before the final rinse step. Some brine always migrates up above the collector so a final downflow rinse is unavoidable.

The second variation is called split flow. Here, the flow of brine is divided into two portions with one coming from the top and the other from the bottom. Both flows exit through the brine collector, generally positioned with one-third of the resin on top and two-thirds below. The portions of brine are generally split into the same fractions as the resin. This technique is sometimes called “co-counter” since the top portion is regenerated co-flow and the bottom counter-currently.

Less conventional designs
Many countercurrent regeneration schemes have been dreamed up over the years. The “impulse” system used pulsing upflow brine to maintain flow and contact time without fluidizing the resin. This worked well in theory but was rather complicated, required a brine pump and was often not reliable due to the frequent opening and closing of valves during regeneration. The “carousel” method of regeneration had multiple softening tanks located at the perimeter of a large carousel. As the tanks 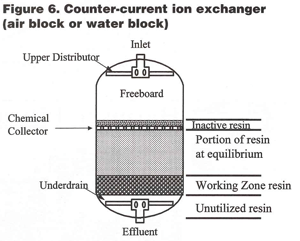 rotated from stop to stop, they went through the various steps of regeneration and service. This design was wildly complicated compared to other countercurrent regeneration schemes and highly susceptible to malfunction due to the large quantity of moving parts.

For large industrial plants, brine use can be substantially reduced by reclamation and reuse. The basic technique is to save the last portion of brine leaving the softener and reuse it as the first portion of brine during the next regeneration. Although this is way too complicated for the average residential softener, it can be made to work for industrial systems. Another promising way to save brine is to use fine mesh softening resins. Fine mesh resins have inherently better efficiency than regular and coarse grade resins. Reduced capacity resins (or other ion exchangers) that are inherently efficient can be manufactured, if anyone is willing to pay extra to get them. It remains to be seen if countercurrent regeneration will become the preferred way to reduce salt usage, or if some other technology will prove to be more commercially practical.

About the author
Peter Meyers is technical manager for ResinTech Inc., a resin manufacturer and distributor in Cherry Hill, N.J. He has nearly 30 years industry experience covering a wide range of applications from demineralizers, polishers and softeners to industrial process design and hardware operation. A member of the WC&P Technical Review Committee, Meyers can be reached at (856) 354-1152, (856) 354-6165 or email: pmeyers@resintech.com.