From Toilet to Tap—The Ultimate in Water Reuse 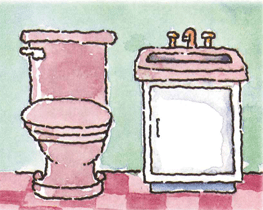 Summary: With an increasing global population and growing scarcity in drinking water sources, the idea of recycling sewage into drinking water has a renewed sense of urgency. Various technologies currently exist to benefit municipal water resources and, eventually, the residential user. With a skeptical public, an argument for this particular proposal is made here.

Then it’s a slam-dunk that we should directly reclaim potable water from municipal sewage treatment plants. So why is so little being done in this area today? It’s simply a result of that hallmark of democracy—public perception. The average person cannot cope with the idea of drinking water from the toilet. Witness the less than stellar response to San Diego’s ill-titled “Toilet to the Tap” program.

There’s no doubt that the availability of adequate supplies of potable water is a very real and challenging issue for the future. Many experts have declared that the supply of fresh water will be (or has become) the most pressing global issue.

It’s a fact of life that many of the geographical areas possessing the most appealing climate have the least available water supplies. As a result, water has to be piped in from other areas, leading to derisive political battles, severe water conservation measures, or both.

Recycled resource
Because the total quantity of water has pretty much been the same since the Earth became a habitable planet, and based on consumption pressures placed on this finite supply, some experts estimate that every drop of water we drink has gone through humans or animals many times. In other words, it’s already been recycled millions of times. And if your community is downstream on the Mississippi, Ohio, Missouri, Colorado or any other river or tributary, chances are you’re drinking water diluted and recycled from those communities upstream anyway. The point is that the general public doesn’t grasp this. Instead, they recoil at the idea of drinking sewage. Meanwhile, almost all overt attempts to construct municipal reclamation facilities are soundly rejected.

In spite of public perception, there are numerous examples of the carefully treated effluent from sewage treatment plants being discharged into aquifers or surface water sources from which municipal drinking water is drawn. Probably the best known is Orange County, Calif.’s Water Factory 21, which has been pumping treated sewage into the local aquifer for many years, and is considered a leader in the application of treatment technologies to municipal sewage.

There are also a number of municipal installations reclaiming sewage and supplying it to the community through a separate distribution system for non-potable applications. In some instances, the reclaimed water isn’t sent to the consumer at all, but used by agriculture and/or industry. The decision to insulate these applications from potable uses isn’t based on technology shortcomings, but rather on consumer perceptions.

Consumer minds
Admittedly, in the United States, drinking water represents only 0.1 percent of the current usage rate (see Table 1); however, the availability of high quality drinking water is still most important in the mind of the consumer. 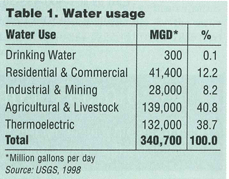 There’s no doubt that current water and wastewater treatment plants are going to require major capital investment over the next 10 years to bring much of the equipment and infrastructure up to date. In addition, new regulations addressing contaminants such as arsenic, disinfection by-products (DBPs), protozoan cysts and additional contaminants that will certainly be regulated in the future, will require even greater funding. The bottom line is that there will likely be insufficient funding to cover duplicate distribution systems, particularly when most of the technologies that can be used to turn municipal sewage into potable water are going to be installed in many drinking water treatment plants anyway.

The following will describe the technologies most appropriate for reducing the concentrations of contaminants and rendering sewage potable.

Primary filtration
In sewage treatment applications, grinder pumps and coarse screens followed by multimedia filters, cartridge or bag filters would be appropriate to pretreat the effluent and protect the downstream technologies.

Biodegradation
Under optimum conditions, the raw sewage should be held in a storage tank for a period of time in order for bacteria to reduce the BOD (biochemical oxygen demand). This can be accomplished as either a pretreatment operation, or on the concentrate from the MF system, combined with the solids from primary filtration.

Membrane separations
Although no single technology is optimum in reducing the entire range of contaminants found in raw sewage, the membrane technologies of MF, UF, nanofiltration (NF) and reverse osmosis (RO) are certainly the most versatile in many respects and offer excellent potential in this application.

In particular, membrane technologies possess certain properties that make them unique when compared to other liquid/solid separation operations. These include:

BOD is a measurement of the amount of organic matter in water that will be consumed by natural bacteria in the environment, such as a sewage treatment plant or septic tank. During normal metabolic activity, bacteria consume oxygen from the water, and the rate of oxygen consumption is an indicator of the quantity of organic matter available for consumption by the bacteria. COD is an indirect measurement of total organic matter in the water, which is both easily consumed or not by naturally occurring bacteria. Both categories of contaminants are found in typical municipal sewage.

NF must be defined in terms of RO as it has many of the same properties, and is often referred to as “loose RO.” The distinguishing characteristics of NF are lower salts rejection than RO. It also has MWCO removal properties 1/3 to1/2 the size of the tightest UF.

RO utilizes special membrane polymers, which have the ability to reject ionic (salts) contaminants, and have MWCO properties in the 100 to 200 Dalton range, approximately 1/10 the size of the tightest UF.

Although the exact mechanism of salts rejection lacks unanimity of agreement, it involves more than the sieving or straining mechanism associated with particulate removal of MF and dissolved organic removal of UF. The point is that although a different mechanism is at work here, there’s no doubt that salts are rejected by RO membranes (to above 99 percent) from a feed water stream.

In this application, either NF or RO would be appropriate for the removal of salts and other ionic contaminants in the sewage stream, depending on the iconic quality of the treated stream.

Disinfection
MF will remove protozoan cysts, tight UF will filter out viruses and bacteria and NF and RO are effective on all three; however, bacteria will grow through membranes, particularly if feed water is allowed to sit stagnant on the surface. This—plus the fact that regulators now recommend “multiple barriers” (employing more than one treatment technology) with regard to disinfection—speaks to the inclusion of a technology specifically designed to disinfect, such as ultraviolet (UV) irradiation, ozonation or chlorination. Neither UV irradiation nor ozonation leaves a residual, which generally makes the final product more efficacious in terms of taste and odor, but is more susceptible to microorganism recontamination in the storage and distribution system.

Conclusion
There are many compelling reasons to consider the direct recycle of sewage into drinking water—the increasing scarcity of potable water quality throughout the world, the existence of numerous geographic locations experiencing a shortage of water of any quality, and the many technologies currently available to accomplish this.

There are two arguments, however, that mitigate against this activity. One, the average consumer recoils at the idea. Although it’s the primary factor inhibiting this activity, it has little basis in fact and appears to be slowly losing its impact. Two, the argument that sewage should be treated but not brought to drinking water quality. The reclaimed water can be used in non-potable applications such as sprinkling lawns and other outdoor activities not involving the possible ingestion of the water. This argument circumvents the “yuk” factor. For municipal applications, though, it involves the significant cost of dual distributions systems. This capital investment is likely higher than the additional costs of applying the technologies to allow the treated water to meet drinking water standards.

The case for direct reuse of sewage is very strong, and whereas its implementation will initiate with treatment at the municipal level, the ultimate reuse may very well be in individual homes.

About the author
Peter S. Cartwright, president of Cartwright Consulting Co., Minneapolis, is a registered professional engineer in several states. In the water treatment industry since 1974, Cartwright has been chairman of several WQA committees and task forces. He has received the organization’s Award of Merit and holds its highest designation, Certifed Water Specialist Level 6. He also has been a member of the WC&P Technical Review Committee since 1996. He can be reached at (952) 854-4911, (952) 854-6964 (fax) or email: CartwrightConsul@cs.com.