By John A. Singley, Ph.D., and Norma Hodge Thompson 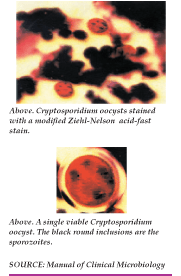 Summary: Regulations increasingly stress the importance of clean drinking water and serve to bring warranted attention to deadly contaminants such as Cryptosporidium. A single solution is presently out of reach, but some treatment methods are more effective than others. A few are described here along with an argument for more resources toward protecting the public.

The American public has shown growing concern for the quality of public drinking water and government’s ability to provide adequate protection.1,2 The question remains in many minds whether the government has regulated the drinking water to the degree of protection needed and desired by the public, or does the American public carry a false sense of security in thinking all tap water is fit for human consumption?3,4

During the last five decades, the ability to detect contaminants—both microbiological and chemical—has continuously increased.5 Scientific testing can identify specific microorganisms in water in terms of one part per billion.6 In some testing methods, scientists can measure in parts per trillion. Since acute illness can result from a single microscopic virus, the form of testing is significant and important to public health. The Centers for Disease Control (CDC) reported that between 1997-1998, an estimated 2,038 cases of illness in the United States could be linked to contaminated drinking water. No deaths were reported.7

Cryptosporidium is a parasite prevalent in primarily surface water supplies that has been attributed to a significant amount of illnesses and corresponding deaths.8,9 Contamination of groundwater supplies also has been noted, although to a much lesser extent.7 During the CDC survey of 1997-98, the number of parasitic-related incidents (90 percent Cryptosporidium induced) in both drinking water and recreational waters increased. The number of reported cases for drinking water were 1,432 and 168, respectively. Recreational waters included both swimming pools and lakes.7 The problems associated with the transmission and detection of the parasite can be characterized by translation of the name “Cryptosporidium,” meaning hidden germ.10

A century of study
The parasite Cryptosporidium was first identified and named in 1907.11 Cryptosporidium parvum is a single-celled protozoan. It’s readily found in the intestinal mucosa of human, where it acts as an opportunistic pathogen.12 Today, Cryptosporidium is considered the third most common pathogen in the United States observed in human acute intestinal infection. It ranks only behind dysentery-type bacterial pathogens such as Shigella and Salmonella. The parasite impairs the intestine’s ability to absorb water and nutrients. The body attempts to rid itself of the parasite by expelling an oocyte form, through bouts of diarrhea and vomiting.13 In turn, this leads to dehydration and malnutrition of the infected person.

The importance of detection, treatment and control of the parasite is evidenced by the CDC reports of 11,612 cases of Cryptosporodiosis in 47 states between 1995-1998, with an annual mean number of 2,900 cases per year.14 These outbreaks occurred in communities that met state and federal standards for acceptable drinking water and where all surface water supplies had been adequately filtered. In 1987, 13,000 people in Carrollton, Ga., became ill with the parasite. This was the first major outbreak observed in a municipal water system that had met all state and federal water standards. In 1993, Milwaukee was the site of a major outbreak of water contamination via the parasite.15 The city water supply was shut down due to the contamination level with as many a 400,000 people exhibiting symptoms of the parasite and 104 deaths reported. The economic impact was substantial, with $30 million lost due to a lack of economic activity as a result of the contaminated water and its effects. In 1994, Las Vegas experienced a similar outbreak that resulted in 19 deaths. Alachua County, Fla. experienced an outbreak at a day camp that resulted in typical gastrointestinal symptoms for 72 children and five counselors.16

The right method
As the threat of Cryptosporidium increases, the need for better means of detection becomes necessary.17 The risk of this infection will vary from city to city, depending on the quality of the drinking water source and the methods utilized in water treatment. Cryptosporidium is hard to detect in a water system for several reasons.17 Standard tests such as turbidity and other water indicators don’t allow for suspicion of the parasite.18 Water quality indicators that can reliably predict the presence of Cryptosporidium aren’t widely available; therefore, when people become ill, the diagnosis of Cryptosporidium infection isn’t realized until later stages of an outbreak.19 The current methods of detecting Cryptosporidium in drinking water, using available analytic techniques, are complex and a higher level of expertise is needed. These aren’t commonly available in many public water testing facilities. 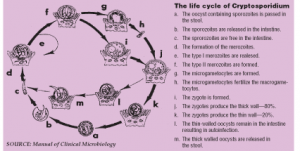 The U.S. Environmental Protection Agency (USEPA) has developed a rule for collecting information regarding the prevalence of Cryptosporidium in drinking water. New regulations have been developed and implemented requiring water suppliers serving more than 10,000 individuals to test their raw water for Cryptosporidium.22 If a level is detected in water, it must be tested for 12 consecutive months. For servers of more than 100,000 people, 18 months of testing is required. For those, the test method selected by the USEPA for surface water is the immunofluorescence assay method. This method detects if oocytes are present. There have been false positives and negatives utilizing this method. The immunofluorescence assay is expensive, time consuming and requires a great deal of experience for the assay to be accurate. At best, according to the American Society for Testing and Materials (ASTM), the test is 42-to-90 percent accurate, indicating a great deal of laboratory variability. A good test level should be in the high 90th percentile. There are other methods for detecting the presence of the parasite, but none of these has been used with tremendous success.20

Ozone is a strong disinfectant that’s capable of destroying the oocyst if used in sufficient doses and with appropriate contact times. Moreover, it leaves no residual in the water. Calgon Carbon Corp. also has recently been issued a patent for inactivating Cryptosporidium using medium-pressure ultraviolet (UV) light and is awaiting word whether that patent will be expanded for low-pressure UV applications.

Reverse osmosis is a filter system that has proven effective against the oocysts. Filtration, in conjunction with ozone, chlorine and chloramines, has also proven effective. This is considered effective in parasite elimination if this treatment occurs before the water is released for distribution.21 The best method of controlling Cryptosporidium in drinking water is heating the water to a rapid boil for one minute, since a temperature over 160°F is necessary to kill the oocyst;

Conclusion
In summary, over the last five decades, changes in the Safe Drinking Water Act have benefited the purity of the nation’s drinking water. The government has played a significant role, but the public has pushed for new amendments in fear of the risks and potential side effects of Cryptosporidium and other contaminants. The drinking water supply is still plagued by “hidden” parasites that continue to infect the American public, resulting in needless illness and death. A cost-benefit analysis would indicate consumers as well as the government desire the associated benefits of clean water without the associated costs. People here say they’re willing to pay for safe drinking water, but they don’t want to incur additional costs without a guaranteed higher level of protection.

With Cryptosporidium infection seemingly on the rise and a greater percentage of the population at risk, it’s important the USEPA, CDC and medical community work together to develop necessary strategies to eliminate its outbreaks and effects. Research is necessary in areas of detection, treatment and compliance. These issues have forced federal, state and local governments to develop means to deal with problems associated with Cryptosporidium; however, we still have much work to do to protect the most single necessity of our lives—water.

About the authors
Dr. John Singley is an associate professor in environmental science and safety technology at Marshall University. He earned his bachelor’s degree in biology from Lehigh University and master’s and Ph.D. degrees from Wayne State University. Singley has published over 30 research papers and spoken at more than 20 national and international conferences. He can be reached at (304) 696-3067, (304) 696-3070 (fax) or email: singley@marshall.edu.

Norma Hodge Thompson is finance manager at CSX Transportation, of Huntington, W. Va. She earned her bachelor’s degree in medical technology and a master’s degree from Marshall University. Thompson spent 18 years as a medical technologist in the hematology department at St. Mary’s Hospital in Huntington. She can be reached at (304) 522-5527.