Slow Going in Rapid City: Bud’s Gets Wiser in the Black Hills of South Dakota 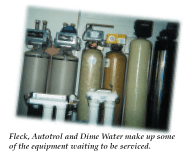 Some people spend a good part of their lives looking for an opportunity to start their own business. Once in a while, it comes looking for them. For Ted Denton, opportunity knocked one day in the summer of 1999.

It wasn’t as if Denton was dissatisfied with his lot in life. As a millwright at a PVC pipe factory, he liked living in the Seattle/Tacoma area of Washington state. He had worked at the plant for 15 years—10 as a millwright—and was happily married with two children. Denton’s wife, Susan, ran an in-home day care center. Aside from the absence of a white picket fence, this picture could qualify for the American Dream. 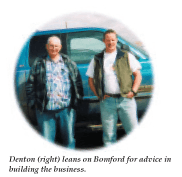 Grass on the other side
But how many times in a lifetime do you get a phone call from hundreds of miles away offering you an established business? What’s the catch, you may ask? Not much. It had been operating for 15 years, you wouldn’t have to fork over any start-up capital and, oh yeah, your father-in-law currently owns the business. There’s one more thing, how fast can you get to Rapid City, S.D.? Such was the conundrum facing Denton.

“It kind of sprung on me,” the 39-year-old Denton said. “Things like that don’t come around very often.” Before packing for a nice, long drive, Denton sought out his family for feedback. Susan and the kids showed enough support to convince Denton he should at least look into the idea.

For the health of it
“It’s not a factory job putting up with all that PVC dust, working on cement floors and being on call all the time,” he rationalized. Denton was also beginning to experience regular sinus infections exacerbated by the plant’s working conditions.

Not sure what to expect, Denton arrived in Rapid City in July 1999. His father-in-law, Gus Bomford, was there to meet him and promptly whisked him away on service calls for a week or two. Denton’s first impression?

“Everybody was so nice. You could talk to them. Since Gus knew them, they would carry on real conversations and not just small talk,” recalls Denton. “He told me to pay attention to what they said and try to understand where they’re coming from. So, the next time you go back, you can ask about their families.”

Pack up and go 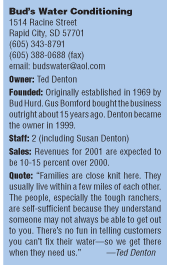 Denton’s mind was made up. He went back to the Emerald City, packed up the family and headed east by August 1999.

One thing Denton dared not change was the name of the business—Bud’s Water Conditioning. Like the people of Rapid City, the name symbolizes simplicity and resilience over time and circumstances. Who’s bud, you ask? Denton laughs when asked to recount story as he’s heard it many times.

Bomford and Bud Hurd worked together at a Lindsay dealership—later EcoWater—in Rapid City. In 1969, Hurd decided to branch out on his own. About 17 years later, Hurd persuaded Bomford to join Bud’s Water Conditioning as the primary salesperson. Bomford also performed installations.

Eventually, Bomford bought out Hurd, who wanted to retire. Still, the moniker of the business remained the same. There’s something to be said for name recognition.

On shaky ground
Denton will have run the business for two years in August and, in that short time as curator, has bumped into his share of problems—literally. In January, Denton rolled a truck on his way to a service call in the Black Hills outside of Rapid City. The truck flipped over a few times when it hit a patch of black ice. He escaped with a few scratches. It’s times like that make him think, “What am I doing here driving 40,000 miles a year?” A similar thought crosses his mind, Denton says, when he works on a customer’s softener down in a well pit with three feet of snow on the ground.

Still, Denton prides himself on helping those customers who other dealerships are hesitant to service because of logistics. He says he has a 200-mile radius, including a big chunk of rural area, around Rapid City as his service boundaries. These parameters often take him to southeastern Montana, eastern Wyoming and southern North Dakota.

“I work far enough out that I can get away from (the competition),” he says. “The roads are so crummy, I go where the other guys won’t go. That’s an advantage for me. The price (customers) pay for the unit involves the service and the service is what sells it.”

Behind the 8 ball
Though he has 1,200 customer accounts, Denton is playing catch up as he strives to bring Bud’s Water Conditioning to its former glory. He reports that sales in 2000 were cut in half over 1999. He predicts a 10-15 percent increase in 2001 over the previous year. Denton recognizes his challenges and accepts the formidable task.

“The equipment was pretty simple (to understand) after being in the business I was in,” he says. “It’s been a little bumpy. I have a lot to learn about water quality issues. So I rely on Gus for that part. It looked like a challenge. I could see lots of possibilities. It’s a good way to go for a family business.”

Denton readily admits he took water quality for granted in Seattle as much as he did clouds in the sky. Sure, he attached a small filter to his kitchen faucet to remove chlorine, but that was the extent of his exposure to the industry. Water was naturally soft and total dissolved solids were low. All that changed once he drove past South Dakota’s state line.

Up in the Black Hills
With a population of 59,000, Rapid City has plenty of hills and old mines. As a result, iron runoff is prevalent. Hard water often measures 100 grain or more and hydrogen sulfide is ever-present. There were a couple of instances when the pH of the water reached 2.9—highly acidic. Consequently, Denton recommended trucking in drinking water. Most of his customers operate on well water. For iron and hardness, he uses Marlow and Dime Water units. Solving hydrogen sulfide comes down to chlorination and, on occasion, a Sulfatreat system.

If he needs something fast and can’t wait, Denton will call on USFilter for a quick fix. By working out of his house, Denton can ill-afford to have a lot of inventory sitting around. Susan chips in with bookkeeping and accounting duties. Even Gus goes out on installations when the urge hits him. Denton says, “I listen real close to what Gus says.”

Ninety percent of his business is residential with the remainder as commercial accounts. Denton’s advertising is limited to the yellow pages and his business relies heavily on referrals. Rentals, which make up a third of revenue, bring stability to his bottom line.

Sell, sell, sell
Denton’s longevity will depend primarily on his sales figures, and he knows it. How does he fare with public contact? “It’s something I have to work on.” What seems to be the hang-up, he’s asked: “The whole process. Bud was the salesman. I figured that out. Maybe it’s a confidence thing. I’ve never been in sales. It’s hard.”

Bomford advised Denton that “sometimes you have to look at the person and already have in mind what you’re going to sell him. If you give him a choice, it makes it hard. If you give him one choice and a price, then you can dicker about the price. But sometimes he needs options.”

Conclusion
Whereas Bomford never joined the Water Quality Association, Denton says it’s imperative for him to join to learn more about the industry. He sees a lot of potential for iron filter/softener combinations, which require less space and lowers costs. Reverse osmosis is another area he sees taking off. Meanwhile, the salt issue, he foresees, will affect everybody in some way.

Replacement parts play even a larger part in Denton’s business because most units he currently services are old. He adds, “The industry is innovative and comes up with solutions quickly and in a non-conventional manner. They’ve got so many different products.”

If Denton can survive his first two years, he acknowledges, there seems to be very little that can prevent his progress. After that, he expects he might even add a white picket fence to make that picture of the American Dream complete.