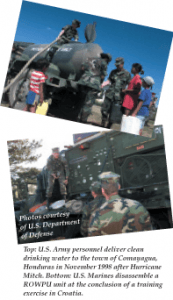 Summary: RO is often discussed as a household water treatment alternative. After all, it’s compact and effective. Yet, there are many applications we frequently fail to keep in mind that could use the same technology. The U.S. military, for one, has used ROWPUs for some time with favorable results.

Success on the battlefield is tied to logistics. The U.S. Army’s battle doctrine calls for high intensity, high-speed combat and the logistical support effort has to keep pace. The logistical battle is more complex and requires a greater depth of understanding of the whole battlefield than does the tactical battle. Top military logisticians have developed strategies to push stores of food, fuel, ammunition and water as far up as possible to the sharp end of combat. Supplying water for people and vehicles is an integral part of the military’s planning. Carrying enough water in places like Saudi Arabia isn’t practical. Here’s why.

A typical armored division during Operation Desert Storm consumed 300,000 gallons of water per day for 350 tanks, 250 Bradley fighting vehicles and 16,000 soldiers. But the military has other terrain than the desert in which to operate. For example, the 31st Marine Expeditionary Unit performs amphibious training operations on and around the Island of Okinawa, Japan. Water from the ocean is plentiful, but contrary to popular belief, Marines cannot drink seawater. They also can’t wash clothes, decontaminate equipment, or prepare food without a supply of potable water. So, the water purification equipment must be portable and flexible in the types of water used by the military in numerous types of battlegrounds.

What is a ROWPU?
To meet conditions in the desert or on a tropical island, the military has adopted reverse osmosis (RO) technology in the form of “Reverse Osmosis Water Purification Units,” or ROWPUs. These devices create potable water from oceans, lakes or any other source of water that’s available. Without ROWPUs, it would be impossible for an amphibious unit or tank division to operate for an extended period of time in many areas of the world. Each ROWPU has a detachment of people to operate and maintain it. Each ROWPU unit can also supply fresh water for as long as the supply of raw water remains. Depending on the quality of the supply, ROWPUs can produce from 600 to 3,000 gallons of water per hour.

A ROWPU is a complete, self-contained water treatment system surrounded by a rigid, metal frame. Typically, units like this are 8×10 feet, and 8 feet high. A unit this size generally weighs around 7,500 pounds. As with most water purification plants of any size, there are a series of pretreatment technologies for the water before it reaches the RO elements. RO technology treats water down to the molecular level. Larger particulates are more efficiently removed with media other than the RO membrane. With the suspended impurities removed, RO can more efficiently remove dissolved impurities. Portability is also a factor.

The modular nature of RO technology makes it ideal for the battlefield. If a membrane module is damaged or plugged, it can easily be replaced with a new one.

Purifying water for troops
Seawater generally contains between 30,000 and 60,000 parts per million (ppm) of dissolved minerals such as sodium, chloride, magnesium and other salts. Any water that contains less than 1,000 ppm of total dissolved solids (TDS) is considered safe for human consumption. Water produced by a ROWPU has TDS content from 300 and 800 ppm, which makes it the equivalent of even some commercial bottled water. There are more steps in the process than the filtering described above. For example, polyelectrolytes are added to the process water. This chemical is a coagulant that causes the molecules of TDS to “clump” together and sink, thus allowing the multi-media filters to operate more efficiently.

Chlorine is added to the purified water to keep it relatively free of microbes during storage and transport. Brine that contains the concentrated, dissolved solids removed from the water is discharged from the ROWPU, while the pure water is stored in 3,000-gallon water bladders made from synthetic rubber. The purified water can also be placed in 950-gallon, insulated portable water tanks. Six of these tanks can be stacked on a logistics vehicle system known as a “dragon wagon” for transport to the battlefield or other locales.

ROWPU in relief efforts
The ROWPU was used extensively during Operation Desert Shield and Operation Desert Storm, and since has proved to be a very reliable source of water for expeditionary forces. But the battlefield isn’t the only place the military has used ROWPUs. These units have been instrumental in a number of relief efforts the U.S. military has provided during the 1990s.

In 1994, ROWPUs were used by American soldiers in Rwanda to purify water from Lake Kiva. Fouled by floating bodies and excrement, without water purification Rwandan refugees would have died in even greater numbers than they did from a lack of clean drinking water. In November 1998, in the town of La Habitad, Honduras, where Hurricane Mitch left more than 11,000 people with contaminated water, U.S. soldiers provided water via ROWPUs. ROWPUs are also being used in the Balkans by the Canadian military.

In camps located in villages like Drur, Bos Petrova or Gos Peak in Bosnia and Herzegovina, members of the Canadian military are busy purifying drinking water. ROWPUs require only three members of the 5th Combat Engineer Regiment at Camp Maple Leaf to operate and maintain them. The regiment is also producing drinking water for residents in large quantities.

Transport made easy
The fast moving armed forces needs a lightweight, portable means of purifying water on the go. In years passed, soldiers relied on water purification tablets to clean water before drinking. That method didn’t remove viruses or other microscopic hazards like Giardia, nor did it make seawater drinkable. Recently, the military has taken to using hand-pumped water purifiers preferred by the backpack community for purifying brackish water sources. While a few of the more expensive units used for ships at sea incorporate RO, units for use on land do not. Most use a 4-micron pre-filter, a ceramic filter and an activated carbon filter. Some also use ion exchange resins in the process. These filters are useful to soldiers in the field who are far removed from larger sources of raw water.

For example, if you were part of a Marine Amphibious ROWPU unit, you would remain near the ocean on a secure beachhead and purify seawater. But if you are on a reconnaissance team inland, far removed from your support, you need to be able to purify your own water. With the hand held purifier, soldiers can lower a tube into the nearest stream and pump a canteen full. These filters greatly reduce chlorine, iodine, herbicides, pesticides, trihalomethanes and other volatile organic materials. Most weigh less than one pound and will produce about 200 gallons of water between filter replacements. In addition to providing a safe source of drinking water, the hand-held purifiers reduce a soldier’s load in the field.

Carrying four quarts of water (8.30 pounds) and one water filter, (11 ounces) as opposed to 11 quarts of water (22.9 pounds) and no means of replacing it, saves almost 15 pounds and ensures the soldier is protected from waterborne viruses. This makes a soldier’s load lighter and gives him an edge while engaged in simulated or real combat. These portable systems aren’t intended to replace ROWPUs but are instead positioned as a “combat multiplier” that enhances soldiers’ ability to respond quickly in times of crises, military or otherwise.

On a much larger scale, the U.S. Army has ROWPUs mounted on barges that can produce up to 100,000 gallons of water per day from salt water.

Conclusion
Handhelds may suffice for keeping soldiers quick on their feet. Larger systems may be required for more long-term engagements. But until there are other profound changes in technology, the Reverse Osmosis Water Purification Unit will continue to be the primary source of water treatment for the military to ensure mobility in any mission.

About the author
Harold Nicoll is senior business communications manager for Dow Chemical Co., of Midland, Mich. Among the many products Dow produces are Filmtec RO membranes and Dowex ion exchange resins. Nicoll can be reached at (517) 636-9086, (517) 832-1465 (fax), email: hgnicoll@dow.com or website: http://www.dow.com/liquidseps.