A History of Water Microbiological Contamination

Water treatment isn’t a new concept. Evidence of decontamination efforts of water dates back to before 2000 BC in Sanskrit writings advising that water should be boiled and filtered. Hippocrates wrote of waters contributing to ill health and the need to boil or strain water in 400 BC.

Early milestones
There are many reports in the early 18th century describing the use of a variety of treatment methods such as filtering stones, acids and oils to purify water. It may be surprising to note that as early as 1732, the practice of sedimentation and sand filtration was popular among individual households. Municipal water supplies began widespread use of sand filtration in 1832. These practices were all taking place long before scientists identified that pathogenic microbes caused infectious disease. Although taste, odor and other aesthetic qualities of water were probably a driving force for treatment applications, an understanding that water could cause human disease was evolving in the mid-1800s.

Dr. John Snow, also known as the Father of Epidemiology, advanced this theory most notably following the famous Broad Street Pump incident in 1852. Snow realized from maps of the London area that cases of cholera were isolated to regions served by the Southwark and Vauxhall Company, using the lower Thames River as its water source and not in a neighboring section of the city served by the Lambeth Company, whose water came from the upper Thames. Removal of the Broad Street pump handle supplying water from the Southwark and Vauxhall Company was largely responsible for the cholera epidemic in the region. Several years later, Louis Pasteur defined the “germ theory” of disease, stating that infectious disease wasn’t spontaneous but a result of the presence and/or growth of harmful microorganisms. By 1884, Robert Koch identified Vibrio cholerae as the causative agent of cholera.

Impact of water treatment
In tandem with the scientific and public health discoveries of disease-causing agents and their routes of transmission, methods of water purification were evolving to address concerns of water quality. From 1880-90, methods of chemical coagulation and rapid sand filtration were being developed and patented, adapting filtration to more turbid water sources. By 1907, coagulant use was widespread in water treatment plants and usually involved the use of sulfate, iron or lime. The introduction of sand filtration in the United States was marked by a dramatic decrease in the incidence of typhoid fever. Inception of a sand filter for water serving the city of Lawrence, Mass., in 1907, corresponded to a 79 percent drop in deaths caused by typhoid fever and a 10 percent reduction in the overall death rate (by all causes) in the area.

Water quality regulations
Prior to 1925, little effort was employed to mandate consistent water quality standards. Before 1900, prohibitions were set regarding use of common drinking water cups by interstate carriers, followed by mandates requiring supervision of community water supply quality in 1913 and microbial monitoring requirements surfacing in 1920. It was in 1925, however, that local and federal governments came together to set consistent microbial standards to evaluate water safety. In 1974, the Safe Drinking Water Act (SDWA) was established to protect quality of drinking water in the United States. The Act authorized the U.S. Environmental Protection Agency (USEPA) to establish safe standards of purity and required all owners or operators of public water systems to comply with health-related standards. Water quality standards continue to evolve. The SDWA was amended in 1996, requiring the USEPA to undertake a number of new initiatives and set a number of deadlines for development of new regulations. These amendments are summarized in Table 1.

Other important water quality regulations include the Surface Water Treatment Rule or SWTR (1989), Disinfection By-Products (DBP) Rule (1992) and Groundwater Disinfectant Rule (2001). The SWTR requires that public water systems utilizing a surface water source must achieve at least a 3 and 4 log removal or inactivation of Giardia and viruses, respectively. Recent modifications to this include the Enhanced SWTR, Long Term 1 SWTR and Long Term 2 SWTR. The DBP Rule is aimed at reducing allowable limits of total trihalomethanes (TTHMs), the precursors to harmful DBPs. The Groundwater Disinfectant Rule requires that all utilities using groundwater as a drinking water source disinfect or develop criteria to demonstrate a low probability of microbial contamination. 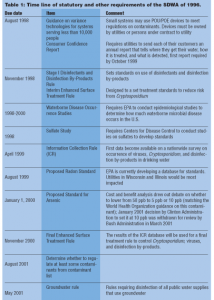 Evolution of disease
Clearly, the application of filtration and disinfectants has practically eliminated the large-scale epidemics of yesteryear. More than 170,000 water treatment plants have been built in the United States and have been very effective at improving the quality of drinking water; however, they aren’t 100 percent efficient all the time. Conditions of storm water events and increased turbidity loads can reduce the effectiveness of a water treatment system, exposing susceptible populations to a wide variety of waterborne pathogens. Plus, aging infrastructure, particularly distribution lines, increases the risk of recontamination in the delivery process. Today, waterborne epidemics are rare, but of great concern is the level of endemic disease, which is the constant, low level of disease incidence in a population (see Table 1).

We recognize now that waterborne disease symptoms extend far beyond diarrhea and may include diabetes, autoimmune disorders, arthritis, cancer, birth defects and diseases of the liver, kidney and heart. While these sequelae—a diseased condition following and usually resulting from a previous disease—may not be immediately life threatening, one’s quality of life can be greatly affected. Likewise, the cost burden to society is immense due to chronic illnesses. Another factor to consider is the growing population of immunocompromised individuals—both because of aging populations and emerging diseases such as AIDS. These sensitive populations are more susceptible to waterborne infections and tend to experience a more severe outcome (i.e., serious illness, death) following infection. Adverse health conditions continue even with use of state-of-the-art treatment plants and many regulatory efforts to improve water quality. This is where point-of-use (POU) treatment options can have a dramatic impact.

For all of the benefits that filtration and disinfectants can claim regarding water quality, we’re at a point where the definition of acceptable water quality is changing. Improvements in and increased monitoring reveals up to 39 percent of finished waters in the United States are contaminated with viruses or parasites1,2. In addition, research has recently revealed protozoan pathogens (i.e., Cryptosporidium) are highly resistant to chlorine inactivation, requiring a ct value (concentration of disinfectant vs. contact time) of >7,200 compared to a ct value of 0.04 for enteric—or intestinal—bacteria.

Treatment at the tap?
A number of factors contribute to the need for POU treatment of drinking water. Public water treatment plants aren’t 100 percent reliable and even if they were, contamination of water in the distribution system resulting from biofilm or faulty pipes is still a concern. According to the USEPA, there were more than 300 million cases of diarrhea each year in the United States in 1990, costing greater than $23 billion in health-related expenses and lost time from work. Scientists estimate water is responsible for a third of these infections. In addition, chronic effects of waterborne disease are still being realized and new waterborne microbial pathogens continue to emerge. Studies show gastrointestinal disease symptoms may be decreased by as much as 50 percent by introduction of a POU system to treat tap water supplies3.

Conclusion
It’s comforting to know a healthy individual isn’t likely to die from drinking water in this country. The availability of POU treatment options, however, has raised the standard of expectations of water quality. Properly maintained POU treatment devices provide the technology to greatly reduce waterborne disease over time beyond what can be achieved by municipal water systems.