Fear and speculation of a potential link between prion disease and water continues to circulate. Although there’s convincing evidence drinking water isn’t associated with acquiring prion disease, so much is unknown about these infectious agents that scientists remain dubious. In addition, these deadly agents are highly resistant to degradation and many conventional water treatment processes.

Prion diseases are also called spongiform encephalopathies because they attack the brain, causing sponge-like holes in the tissue. Although prion diseases may take two to eight years or even longer to manifest, they’re all fatal and widespread in animals. The most publicized prion disease is probably BSE (bovine spongiform encephalopathy), or “mad cow” disease, while the most common is scrapie, afflicting sheep and goats. Other animal prion diseases include TME (transmissible mink encephalopathy) and CWD (chronic wasting disease of mule deer and elk). Humans are also susceptible to prion diseases including: CJD (Creutzfeld-Jacob Disease), GSS (Gerstmann-Straussler-Scheinker syndrome), FFI (fatal familial insomnia), Kuru and Alpers Syndrome.

Prions, infectious particles composed simply of protein, are an entirely new class of infectious pathogens.1 They’re smaller than the smallest of viruses and contain no nucleic acid material (i.e., DNA or RNA, previously thought to be required by infectious agents). In fact, they may be a modified form of a normal cellular protein found predominantly on the surface of host neurons. They’re highly resistant to heat and disinfectants and don’t elicit an immune response in infected hosts. Prions are known to be responsible for inherited as well as communicable diseases and there’s no known treatment or cure.

Where do prions exist?
Because of widespread human consumption of beef and the link between contaminated beef and prion disease in humans, presence of BSE in cattle is a very serious public health issue. Identified in 1986, in Great Britain, mad cow disease is a chronic, degenerative disease affecting the central nervous system of cattle. Worldwide, there have been more than 178,000 cases in cattle since 1986. Over 95 percent of these cases occurred in the United Kingdom (UK). Other endemic cases of BSE have been reported in Belgium, Denmark, France, Liechtenstein, Luxembourg, the Netherlands, Portugal, Ireland and Switzerland. The source of the disease was traced to a food supplement made from meat and bone meal from dead sheep, a process outlawed in 1988. Halting use of animal-derived feeds has greatly reduced the mad cow epidemic, however many people may already be infected.

The risk of acquiring BSE from consumption of beef is difficult to determine, but there’s strong evidence the agent responsible for BSE outbreaks in cattle is responsible for human cases and that specific foods are associated with transmission of prion disease from cattle to humans. In addition, health officials in the UK have announced a new variant form of CJD (vCJD). This new form afflicts a younger population range (14-to-52 years, with an average of 28 years). Data also support an association between BSE and vCJD. Ongoing research is evaluating the potential connection between prions and common neurodegenerative conditions in humans including Alzheimer’s disease and Parkinson’s disease.

Role of cannibalism
Human prion diseases are rare, occurring at a rate of about one in a million persons per year. Kuru, causing loss of coordination and dementia, has been documented since 1957 but only in Papua, New Guinea. The practice of cannibalism is thought to be the primary cause of the disease—which has now been stopped, marking a virtual disappearance of the disease. CJD, also marked by dementia, occurs worldwide, usually to people around age 60. Approximately 10-to-15 percent of cases are inherited and a small number of persons have been infected via corneal transplants, brain electrode implantation, growth hormone injections or contaminated surgical instruments.

The U.S. Department of Agriculture (USDA) has been conducting surveillance efforts to identify the presence of BSE since 1990. In addition, in 1989, restrictions were placed on the importation of beef products into the country. As a result, no BSE has ever been identified in the United States. In 1997, the Food and Drug Administration prohibited the feeding of animal proteins to cattle. Last year, the USDA prohibited all importation of rendered animal protein products from Europe, regardless of species, due to the announcement that animal feed was potentially cross-contaminated with the BSE agent. Prion diseases detected in U.S. animal populations include: Scrapie in sheep and goats, transmissible mink encephalopathy and CWD.

The waterborne route
Although the consumption of infected beef products prior to their ban in 1989 is the most likely source of BSE transmission to humans, this isn’t proven. Scientists have therefore considered an environmental source, including drinking water potentially contaminated with BSE via cattle rendering plants, landfills and waste effluents. In 1996, approximately 800,000 cattle were culled in the UK. Concerns were raised regarding the potential hazards of disposal of culled cattle carcasses. Adding to concerns is the fact that prions are highly resistant to heat, ultraviolet light, ionizing radiation and common disinfectants that normally inactivate viruses or bacteria. In addition, they’re known to remain infective for years in the environment.

The good news is that prions don’t multiply in the environment and are extremely “sticky” due to their hydrophobic nature, meaning they’ll easily bind to particulate matter, making coagulation, filtration and granulated activated carbon (GAC) treatment effective measures for their removal from drinking water and wastewater.

Calculating the odds
Furthermore, it’s estimated that the human infectious dose of BSE is 1013 prions (compare to 10 to 100 for protozoan and one for viral pathogen). The probability of ingesting such a high dose in water is unlikely, especially with the tendency for dispersion and dilution in an aquatic environment. In addition, there appears to be no accumulative effect of prion ingestion over time and some humans may be immune to prion infection altogether.

According to risk analysts, even under worse case assumptions, an individual would have to consume two liters per day of tap water for 45 million years to have a 50 percent chance of infection through drinking water2. The daily risk to individuals has been estimated to be extremely low (<10-10 per person per day). These risk levels are based on assumptions that the level of BSE in the UK would continue at the 1996 level (which it hasn’t) and that infectivity is accumulative (which it isn’t). Others warn that the true risk of BSE in water cannot be quantified and can’t be assumed to be zero, due to the great uncertainties and assumptions associated with estimating exposure levels, survivability, transport, and dose-response characteristics of prions.3 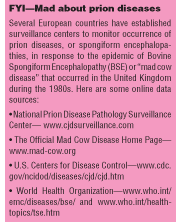 Only time and the advancement of scientific knowledge will definitively reveal the role of prions in human health and the routes of exposure to these infectious agents. For now, the possibility of a waterborne route appears to be remote.