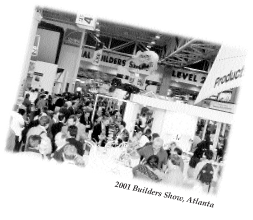 e heading for the airport in a downpour after four days attending the International Builders Show in Atlanta, my driver commented on “all the rain in the last few days.”

“It sure slows down traffic, but let me tell you the rain is sure welcome here in Atlanta,” he said. “We’ve been suffering through a three-year drought and the Georgia clay is baked so hard. When it does rain hard, the water can’t sink in to do much good. We need to learn to not waste water.”

The driver echoed things I saw and heard inside the walls of the Georgia World Congress Center, where over 70,000 construction industry attendees placed far witnessed greater emphasis placed on water conservation than on water quality concerns.

‘Low-flow toilet talk’
Nine years ago, the U.S. plumbing equipment industry was at a crossroads. The U.S. Energy Policy Act of 1992 had dictated that all water-using toilets use no more than 1.6 gallons per flush, compared with the then-standard 3.5 to 6 gallons. (The conservation measure also imposed a 2.5 gallon per minute, or gpm, limit on shower heads.) The ceramic toilet fixture industry quickly rose to the challenge. They designed and delivered a whole new generation of low-flow toilets that have since theoretically saved hundreds of millions of gallons per day across America. Still, some of the savings may have been an illusion.

The first low-flow toilets didn’t work very well, compared to their water-wasting predecessors. Homeowners found they had to flush the newer toilets, not once, but two and even three times. This year, according to a roundtable of builders in Atlanta, there will be a Congressional proposal to strike down the low-flow toilet requirement, in spite of the fact a second generation of low-flow toilets displayed at the Builders show perform as well as the old water-wasters for solid-waste disposal. Since toilets use roughly 40 percent of all water in the average home, let’s hope builders will embrace the newer low-flow toilets. After all—waste not, want not.

To provide guidance for builders facing local water shortages, the National Association of Home Builders (NAHB) Research Center is conducting field evaluations of this and other water conservation technologies in conjunction with the Partnership for Advancing Technology in Housing (PATH). This year, extreme U.S. drought conditions are expected in the Southeast and parts of the Midwest, according to the National Oceanic and Atmospheric Administration (NOAA).

In addition to new low-flow toilets, other water-efficient products displayed at the Builders show included front-loading automatic washers by Whirlpool, GE and Maytag. There were low-flow showerheads that use less than 2.5 gpm, the WaterCop leak detection and automatic shut-off system by DynaQuip Controls, and “intelligent” hands-free faucets that precisely control water volume from El-Co Electronics.

Kinetico’s Quad-50 carbon/softener is a salt- and water-saver with demand-initiated regeneration. A high-volume, packed carbon bed eliminates the need to frequently replace media. The carbon adsorbs chlorine and greatly reduces any taste and odor present in the untreated water.

The PureTouch AquaSuite comes with two spout sizes—a high arch for kitchen uses such as filling pots and pitchers; and a low arc for the bathroom sink. Green, amber and red electronic filter-life indicators tell when to change the filter. List prices range from $280 to $420. The MicroTech undercounter-mounted filter by Culligan reduces problems of taste and odor, lead, cysts, lindane, mercury and atrazine. Its filter life is 750 gallons and list price is $53.

Kohler, a global leader in kitchen and bath design, featured its undercounter Aquifer water filtration system with the Kohler Wellspring line of decorative faucets available in various finishes and colors. It comes in two models: 1) a High-flow cartridge maintains a flow rate of 1.5 gpm, the fastest filtered-water flow rate on the market, according to Kohler; and 2) a Premium 0.6-gpm cartridge is rated for lead as well as cysts, taste and odor. Both filter up to 1,500 gallons of water and are NSF certified, with housings of high-impact plastic with stainless steel hoses and brass fittings. A built-in shutoff valve eliminates the need to turn off the water supply when changing a cartridge.

Price Pfister failed to show even one Pfilter Faucet at this year’s show, raising the question of its continuing commitment to the category. Delta still hasn’t introduced anything but is known to have developed prototype filter faucets more than a year ago.

GE showed its SmartWater faucet-mount filter in one of its display kitchens. The unit, sold exclusively by Home Depot, is rated for lead and cysts and sells between $18 and $22.

Sears/Kenmore side-by-sides, made by Whirlpool, featured the same under-grill cartridge. Both Kenmore and Kitchenaid top-mount refrigerators are expected to debut eye-level filters in their fresh food sections later this year.

GE unveiled its new Arctica side-by-side refrigerator-freezers with SmartWater Plus filters in the fresh food compartments. They feature eye-level filter change indicators, just inside the door.

Amana and Frigidaire were two appliance brands with refrigerator filters that failed to exhibit in Atlanta. Maytag exhibited, but is the last major refrigerator manufacturer to not include water filtration.

Taking the heat
Pure Water Inc. unveiled its new Watt’r Twin appliance, a distillation appliance that
feeds once-wasted heat to any adjacent conventional water heater. The pre-heat feature results in energy savings on the home’s hot water bill, according to the manufacturer. The company also showed other distillers in Atlanta. Sears/Kenmore will introduce two new distillers later this year.

Conclusion
Kohler and Moen, in particular, added significant designer interest to home water treatment with their upscale styling and fancy finishes on faucets that bring filtration beyond the kitchen—and into the bathroom. Still, this year’s International Builders Show seemed to be more involved with products that help conserve water than those that treat it.

David H. Martin is president of Lenzi Martin Marketing of Oak Park, Ill., a firm specializing in water improvement and environmental marketing that integrates old and new media. He can be reached at (708) 848-8404, e-mail: newage@mediaone.net or website: http://www.lenzimartin.com.