Summary: A recent spate of regulations in a number of states has served notice to resin suppliers that current processes will need to be modified. A couple areas of concern are salt discharge and brine efficiency. The following article describes the role of regeneration and how proven techniques may make new regulations a moot point.

For several years, several state regulatory agencies have pushed to ban softeners or demand increased salt efficiency. Resin suppliers have responded by trying modifications of existing softener resins such as finer mesh, uniform particle size and partial sulfonation. None of these has proved to be effective enough for wide scale use.

Efficiency vs. capacity
The fine mesh resin performs well in high iron waters and they provide increased capacity per pound of salt; however, they operate at lower flow rates since they have higher-pressure losses. Various “new and improved” products such as uniform particle size (UPS) resins have shown too little improvement in efficiency to garner significant market share. 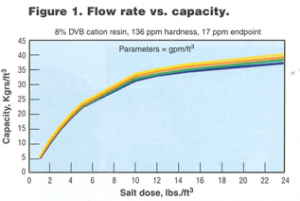 Figure 1 shows what happens when water softeners are operated at very high flow rates. The difference in operating capacity between 3 and 20 gallons per minute per cubic foot (gpm/ft3) is about 1.5 percent to a 17 parts per million (ppm), 1 grain endpoint and about 3 percent to a 5 ppm endpoint. It can be shown by extrapolation that greater than 98 percent of the available (regenerated) capacity is utilized at normal household flow rates. No matter how good the resin, any improvement in the product cannot provide more than a small increase in operating capacity when regenerated at the same level as currently available softener resins—8 percent divinylbenzene (DVB). Obviously, there isn’t much room for improvement in the service cycle. 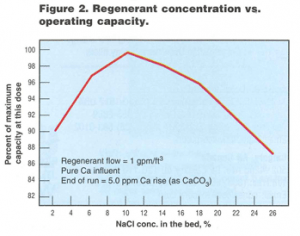 Figure 2 isn’t intended to cover every regeneration scenario; however, the graph’s curvature would be similar for most households’ softening applications. The peak efficiency occurs when the regenerant concentration is about 10 percent; however, only a 2-percent loss in capacity occurs between 8 and 15 percent regenerant concentration. The data were collected at regenerant flow rates of approximately one gallon per cubic foot on waters containing mostly calcium, whereas lower concentrations could be used in high magnesium water. 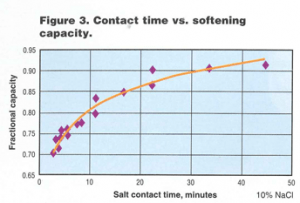 Figure 3 shows how contact time of the brine with the resin affects capacity. Figure 3 is perhaps the most instructive because it shows most softeners today are losing almost 25 percent of the potential operating capacity due to high-speed injection. Softeners set for a brine dose of five pounds per cubic foot have injection times of less than 10 minutes and achieve operating capacities of around 20 kilograms per cubic foot (kg/ft3). Increasing the injection times to 30 minutes would increase the capacity by 25 percent to over 25 kg/ft3.

Times and cycles
Increasing regenerant contact time isn’t easy to do because of the wide difference in flow rates during the regeneration and service cycles. In order to handle these differences a second distributor—or some other means of controlling brine distribution at much lower regenerant concentrations without causing extremely high-pressure losses during the service cycle— would be required. Figures 4 and 5 show a typical household water softening tank and its larger industrial cousin. Besides their size, the most important difference between the two tanks is the inclusion of a separate brine distributor in the industrial version.

The brine distributor’s job is to distribute the brine evenly across the top of the resin bed. In order for the brine distributor to be effective, it must have relatively few holes with small diameters and be positioned evenly across the top of the resin. It must develop enough back-pressure that the brine will be forced to use all the holes. To be effective at the higher flow rates of the service cycle, the upper distributor must have more holes with bigger diameters. Most distributors will provide good distribution over a maximum flow rate range of about 5-to-1. Outside this range, distribution becomes increasingly less effective, pressure losses become unacceptable or the flow rate drops off. As a result, complaints increase and customers return merchandise. 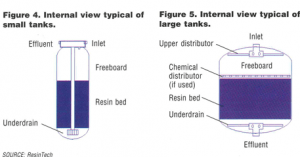 Household units operate at peak flow rates of about 15 gallons per cubic foot with typical average flow rates of about 2½ gpm/ft3. The 15-gallon figure determines the maximum rate the distributor must let through the tank. From this, the lowest flow rate for good distribution is also indicated, typically about 3 gpm.

A typical regeneration using a salt dose of 5 pounds per cubic foot (lbs./ft3) applied as a 10 percent brine at 3 gpm gives a brine contact time of less than two minutes. Reducing the brine flow to 1.5 gpm provides only five minutes contact time while sacrificing good distribution. Cutting brine concentration to 5 percent helps maintain good brine distribution and allows high service flow rate. Nevertheless, the gain in efficiency due to longer contact time is offset by the loss in efficiency due to lower concentration. In short, most softeners leave a lot of potential brine efficiency to be desired. The compromise using lower concentration brine is perhaps the best currently employed compromise in systems with adjustable brine concentrations and flow rates. 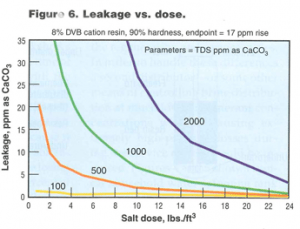 the increased efficiency comes at a cost. Decreasing brine dosage levels result in increasing hardness leakage. One way to overcome this is to use countercurrent regeneration.

Countercurrent regeneration
Countercurrent regeneration is the technique where brine flows upward from the bottom through the top of the unit during regeneration and the hard water flows down from the top through the bottom during the service cycle. Only about 2 percent of the resin bed is required to soften the influent. Thus, the bed can be looked at as 50 individual resin packets. By introducing brine through the bottom of the bed, it receives the purest brine and at 50 times higher dosage than the average of the entire bed. This zone is extremely well regenerated and can polish the softened water so that only very low hardness leakage appears even when low regenerant levels are used. A countercurrent unit with even one pound of salt per cubic foot dosage can provide lower leakage than a normal softener regenerated with 15 lbs./ft3.

The problem with countercurrent regeneration is equipment design (cost and complexity). A mechanical device is required to keep the resin bed in place during the outflow portion of the brine cycle, otherwise the resin will become fluidized and the brine will flow around the resin bed instead of through it. Without the close contact of a compressed resin bed, efficiencies are lost.

Running the brine slower in order to prevent fluidization of the bed returns us to the distribution problem. One option would be to use a series of pulsed regenerations. This would allow the bed to rise a small fraction at a time, unsettle and reach equilibrium momentarily before the next timed pulse. The entire regeneration would take longer and allow the benefits of longer contact time, lower regenerant levels and countercurrent regeneration. Such a unit described was developed and about 250 industrial sized softeners were sold. Unfortunately, the company is no longer in operation and these systems are no longer offered; however, a privately owned company as part of a development program recently acquired the patent rights.

Another approach is series softening setup with a primary and polishing softener. The disadvantage is in using two vessels instead of one; however, no mechanical controls are needed and the operation is similar to a standard softener. The units could be regenerated in a counter-flow direction by introducing the brine to the second vessel first. If both vessels are the same size, the second vessel is regenerated at two times the average dose level. This allows reduced overall regenerant dosages, higher salt efficiencies and good leakages.

Conclusion
It’s definitely possible to improve brine efficiency. Proven techniques such as those mentioned above have been available for more than two decades; however, as long as salt remains cheap and in the absence of other pressures from environmental and regulatory agencies, there’s little incentive to exploit this knowledge. With pressure from California in the form of tighter softener salt efficiency rules implemented in January 2000 and coming in January 2003, that may be about to change.

About the author
Michael Gottlieb is founder and president of ResinTech Inc. of Cherry Hill, N.J. ResinTech is a manufacturer and supplier of ion exchange resin, activated carbon products and the Aries line of laboratory demineralizers and cartridges. A member and/or active participant with the American Institute of Chemical Engineers, American Society of Testing and Materials, American Water Works Association and the Water Quality Association, Gottlieb holds a bachelor’s degree in chemical engineering from the New Jersey Institute of Technology. He also is a founding member of the WC&P Technical Review Committee. He can be reached at (856) 354-1152, (856) 354-6165 (fax) or email: mcgott@resintech.com.