Summary: Water sources supplied to hundreds or even thousands of people are obviously monitored closely. Moreover, correct distribution and processing of the water become primary issues. One Colorado city found the solution using a nanofiltration plant. Early findings are promising and are detailed below.

Clifton, CO is located along the Colorado River just east of the city of Grand Junction. Its primary water source has always been the river. The Clifton Water District treats river water and distributes it to the city and other nearby areas. Dissolved solids concentration in the river varies with the season. The lowest dissolved solids concentration is during spring run-off, which starts in April, and the highest is during winter, when the volumetric flow in the river is at its lowest. During winter, the total dissolved solids (TDS) is typically 700-800 milligrams per liter (mg/L). The water district wants to maintain 400-450 mg/L TDS in the distributed water. For many winters, it bought water from Grand Junction, which pumped it from lakes on Grand Mesa. However, with increasing water consumption, this source wasn’t considered reliable in the long term, so the water district examined the alternative of using membrane filtration to reduce salinity of the Colorado River water.

Pilot plant testing showed nanofiltration (NF) would accomplish the desired reduction in TDS. As a result, a 2.4 million gallon per day (mgd) NF plant was built, which could be expanded to 4.2 mgd. The project was designed by the water district’s management and operational staff. Initial 1996 cost estimates suggested the plant would cost $4.5 million. Close cooperation between the water district and the winning bidder resulted in an estimated saving of $1 million in consulting and engineering fees. Cost for the NF equipment, including multimedia filters and cartridge filters, was $1.72 million. Southwest Contracting of Cortez, CO, constructed the building, a 1-million-gallon tank for the permeate, and the required piping to and from the NF plant for $1.11 million. The total cost of the completed project was $3.4 million.

The NF plant was started in September 1997 and was fully operational by January 1998. During the 1997-98 winter, the water district didn’t need to buy water from Grand Junction, but instead sold water to it.

All the water for distribution goes through the treatment steps up to the clear well. Water from the clear well is mixed with NF permeate before being distributed.

The NF plant consists of four skids in parallel (see Figure 2). Each has two multimedia filters in parallel, chemicals dosing and cartridge filters. The added chemicals in 1997-98 were sodium bisulfite, sulfuric acid to pH 6.9-7, and Flocon 260 antiscalant. In 1999, the antiscalant was switched to Calgon EL-5301, after which there was no need for adding acid to prevent calcium carbonate precipitation.

Mode of operation
As shown in Figure 2, the three-stage system is arranged in a 9-5-3 array, with six 8-inch-diameter × 40-inch-long elements with polyamide NF membrane elements in each housing, totaling 102 elements per skid. skid. It operates at nominal 85 percent permeate recovery. The stainless steel housings are of the 4-port design to minimize required plumbing. Concentrate pressure is controlled with an orifice and a hand-operated valve in parallel. The permeate is taken out from both ends of each housing.

Most operational data are transferred electronically to a computer that, among other things, normalizes the permeate flow rate. The computer monitor shows many different parameters, i.e., the actual operating conditions and different operational parameters between specified dates.

Permeate flows directly to a 1-million-gallon tank without help of a transfer pump. The pressure in the single pipe that carries permeate to the tank is 17 pounds per square inch gauge (psig) at the skid end. From this tank, it’s blended into filtered river water for distribution. The water level in the permeate tank determines how many NF skids are in operation, according to the following schedule:

When an NF unit isn’t in operation, it’s flushed with permeate for four minutes daily. When it’s inoperable for a week, it’s preserved with a 1-percent sodium bisulfite solution. The preservative solution is changed every two weeks.

Plant performance
The first in operation, Skid 1 is the only one with performance data from the same full month in two different years, so performance of the NF plant is mainly focused on this skid. Skid 4—the last to be installed—wasn’t in full operation until mid-January 1998. Skid 1 operated on and off until that time and then there was no need for it until mid-August. No NF skid was operating from the end of April to the end of July 1998, because of low TDS in the river water at that time.

The permeate flow rate, feed pressure and temperature during the first 13 months of operation in Skid 1 are illustrated in Figure 3. The permeate flow rate from a membrane element is strongly dependent on pressure and temperature, and slightly so on the solute concentrations. To evaluate the performance of the membrane elements, the data have to be normalized by calculation of a fouling factor (FF). 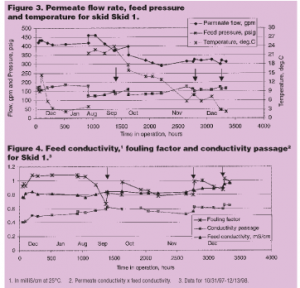 Salt rejection of the NF membranes is mainly dependent on the anions. With different cations present, the monovalent ones will

preferentially follow the anions to the permeate side. One way to examine the integrity of the NF skid would be to analyze for sulfate—a common anion that’s highly rejected by the membrane. The results from these water analyses are shown in Figure 6 and Table 1. The rejection of sulfate was high both times, 99 and 98 percent respectively. The rejection of hardness was slightly above 50 percent on both occasions; however, there was a big difference in the bicarbonate rejection. It was 48 percent in January but only 15 percent in September. This difference was mainly due to different pH values. The lower pH in September resulted in lower bicarbonate and chloride rejections. Despite the lower bicarbonate rejection, bicarbonate concentration remained about the same in the permeate because the lower pH decreased bicarbonate concentration in the feed. The lower rejection of chloride, however, resulted in a net increase of about 50 mg/L sodium chloride in the permeate.

Conclusion
The nanofiltration plant at Clifton, CO, met the requirements during its first year in operation. Membrane fouling required frequent cleaning, as often as once monthly. Again, the cause of membrane fouling was likely microbiological growth, but this has not been verified.

Acknowledgment
The author would like to thank Dave Payne, water treatment plant supervisor at Clifton Water District, for help in collecting the data, and correcting errors in the draft manuscript.

About the author
Peter Eriksson is senior applications development engineer for Osmonics, Crossflow Filtration, in Vista, Calif. Osmonics built the NF equipment and Southwest Contracting of Cortez, CO, constructed the building, the 1 million gallon permeate tank, and the piping to and from the NF plant. Eriksson can be reached at (760) 598-1800, ext. 193 or email: periksson@osmonics.com.