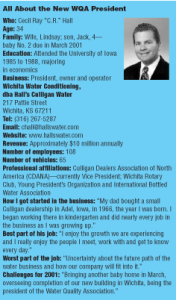 C.R. Hall, the incoming 2001-2002 president of the Water Quality Association, took the time in February to put down these thoughts on the coming 12 months that he’ll serve as steward of a 2,500 member global organization. You’ll recall that the WQA presidency alternates between manufacturing and retail dealership representatives in the point-of-use/point-of-entry (POU/POE) water treatment industry. He points out that his entry into the industry virtually coincided with his birth as, in 1966, his father bought his first dealership. C.R. took over the business in 1991 after his father’s death and has since added four dealerships to the business, which now includes six in Kansas and Ohio. Those are in Wichita, McPherson, Newton and Independence, Kan., as well as Fremont and Norwalk, Ohio. In addition, the business is building a new 58,000-square-foot headquarters on seven acres in Wichita. It currently operates there from five buildings (encompassing 30,000 square feet) on one acre. The new building is scheduled to open in the fall. By the time you read this, there also will be another little voice in the Hall family since C.R. and his wife of 10 years, Lindsay, are expecting a new baby due in March.

I’m excited and honored to be selected as the next president of the Water Quality Association. As a second-generation member of this industry, I know and understand the depth of skill and knowledge that preceded me in this position. It’s very humbling indeed!

I would like to explain my view of the value of WQA and my goals as president during the next 12 months.

The WQA has been about families and relationships for more than 25 years. By this, I’m not just talking about the fact that family-owned and operated businesses have been the core of the association since its inception. I also mean the relationships are fostered between people in our industry by WQA, and at times even between competitors, that are productive for the whole of the POU/POE water treatment industry.

The value of WQA to me
I’ve learned much from the people I’ve met through WQA. Men like Bruce Burrows, Pete Censky, Ray Cross, Bill Dodd, Bill Fritzsche, Ned Jones, Chris Layton, Jack Lorenzen, Dick Mayne, Doug Oberhamer, Jerry Young and too many others to mention have played pivotal roles in my growth as a person and as a business man. I know I wouldn’t be where I am without these men and their patience with my questions and mistakes. I say thank you to all that have guided me from afar!

The association itself has introduced me to new concepts and new products, and reminded me of many things I had forgotten during my daily in-the-field grind. I also have found WQA to be invaluable in forcing me to confront many of my long-held beliefs about the industry and my business. The association has also managed to bring in speakers and industry leaders that neither my franchisor nor I could bring together. The learning at these events has been invaluable in my building a business that’s relevant to my customers.

WQA is also extremely valuable to me because of the continuing education it offers my employees and me. My dealership currently employs 11 WQA-certified personnel and I feel these certifications are valuable enough that I offer to pay for the tests, the study materials and the proctors for the exams. We even offer bonuses to our people to pass the tests! I feel the journey of learning is at least as important as the certificate given at the end, because many of our people get little continuing education in their daily lives. I would strongly encourage you to make use of this valuable resource and encourage certification for all of your employees.

WQA’s value to the industry
As I said earlier, this association is about relationships. And these relationships help the industry work together to better itself. Past successes have occurred in self-policing of sales practices, changing the minds of legislators set on “registering” our products, fighting (in court) to ensure the ability of our members to sell their products—and many other examples.

We’ll undoubtedly have more of these issues arise in the future. WQA is the credible industry voice in front of legislatures, courts, the press and consumers. And the reason it is so is because of each member’s willingness to set his personal short-term needs aside and work for the good of the entire industry. But it cannot continue to be that without all of the industry leaders at the table. We at WQA need to work hard at building these relationships and recruiting these leaders today because we know we’ll need all of them in the very near future.

We don’t always know what future issues will confront our industry. We can assume we’ll know some of them: 1) we see the enactment of the California compromise on softener salt efficiency coming in 2003; 2) the issue of chlorine reduction as a health claim; 3) attempts to change the plumbing code to make it more reflective of real-world water use in a home, and 4) the looming changes occurring with enforcement of new MCLs for arsenic and radium. Where required, we’ll work to change or soften the blow of those we can. We’ll prepare our members for those we can’t.

My focus as WQA’s ‘leader’
I will have three main goals during the next 12 months:

1. Upgrading the interaction and value of the state and regional associations. Given the decentralization of government, we need these associations more than ever. They should be the eyes and ears of the industry and WQA should assist when asked. These local associations are also great incubators of future leaders of WQA.

Given these reasons, we must strengthen the value of the state and regional associations. The vendors and dealers need to get much more value from their attendance at events and for their involvement in the association—and WQA can help. WQA’s resources will be available—resources like education and certification seminars, speakers, trade show management, publishing, lobbying, industry mobilization.

We want these groups to retain their sovereignty. WQA can help ensure it by helping to increase the attendance and professionalism of their meetings and conventions.

2. WQA needs to focus on its core. Remember the basis of the Association? It has been about the dealers and their suppliers since its founding in 1973. These two groups (retail dealers and manufacturers/suppliers) continue to be the core of the membership.

I see that the industry is changing and WQA is changing with it. In the past several years we have organized an international division (the World Assembly), and increased the size of our tent by forming “Sections” that add a focus on Consumer Products (like Brita and Pur) and Commercial/Industrial companies to the traditional Retail Dealer and Manufacturer/Supplier sections. With the birth of the Water Quality Society, we are even embarking on the path of exposing end-users and operators of our products to the association. The proposed increase of focus toward WQA-led industry and technology training is another change that has occurred because of a void in the marketplace that WQA can fill. I feel these changes have made WQA a much better association and made it much more relevant to the outside influencers of our industry like the press and federal, state and local governments.

All that being said, we have to make sure we remember who brought WQA to this dance. It was the dealers and those who supply those dealers. It will be a difficult job, but I know the staff and leadership of the association can balance the wants and the glamour of the new with the continuing needs of the core.

3. Maintaining relevance. This is the most important thing WQA needs to focus on. This business is changing quickly and WQA needs to change with it. A generation ago, we were focused almost exclusively on residential time clock softeners. Today, while the softener business is still very important to us all, it is far from our sole product. We have drinking water systems, commercial/industrial water treatment installations, contamination remediation, municipal contracts and many other things. In fact, bottled water, which was practically none of my business when I took it over a decade ago, is now nearly 50 percent of my revenues and a huge part of my future growth plan.

It’s these changes that will force WQA to look inward at all of its missions and make sure that the plan to fill the needs of its members is relevant in today’s world. If regulators are demanding more third-party testing, WQA needs work to ensure it’s available. If there’s a need for a study to prove the effectiveness of our products, WQA should spearhead the effort to set up the study.

Conclusion
Some may say my second and third points—changing and maintaining relevance—seem, on the surface at least, to be diametrically opposed. In life, we often are faced by seeming contradictions that we’re required to overcome. The same is true here.

It will indeed be difficult to remain focused on our core and at the same time be able to change as the industry changes. But it can be done. I have complete faith in the ability of the staff and leadership of WQA to be able to balance these two items and make the association a better resource and value for its members.

Again, I’m proud to be chosen as the next president of this association. It’s a great honor and a great burden, but it promises to be educational and enjoyable for me. I have faith that we’ll have a great next 12 months, and that the industry will be an even better “family” at the end of my term!