Summary: Large municipal water sources are discovering that reverse osmosis can be applied to their specific applications. Of course, it takes a sense of planning and proper procedures to provide optimum results. One Florida water treatment plant found a cost-efficient as well as effective way.

The islands of Captiva and Sanibel, located just off the southwest Florida coast, are popular wintertime resorts that need a supply of fresh water to maintain the population and the thousands of visitors that go there to escape the winter chill every year. The Island Water Association Inc. (IWA) supplies drinking water for these small barrier islands on the gulf side of the peninsula. The IWA was incorporated in 1965 as a non-profit, member owned corporation. Due to continued population growth on the islands, IWA had to develop a plan to supply drinking water. Sanibel Island has a resident population of 5,800, but its popularity as a resort causes that population to soar to over 20,000 during the tourist season. Keeping the wintertime residents comfortable is a key goal for resort owners and the townspeople who rely on them for their livelihood. Fresh water is an important part of that comfort, not to mention safety and health.

Purifying well water
The IWA began using reverse osmosis (RO) technology in 1980. The first three of the initial membrane trains utilized a unique sized 8½-inch diameter cellulose acetate element, which operated at feed pressures greater than 550 pounds per square inch (psi) to produce 420 gallons per minute (gpm) of water. These three trains (referred to as A, B and C) were used to purify water from 14 brackish artesian water wells. 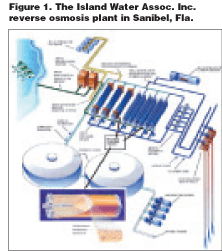 The 14 wells are drilled between 600 and 900 feet below the surface of Sanibel Island. These wells were located up to three miles east and west of the RO plants. Submersible pumps and motors ranging between 40 and 60 horsepower are set at 160 feet deep and pump at rates of 350-to-650 gpm. This water comes from the lower Hawthorne and upper Suwannee aquifers.

The feed water parameters are as follows:

Water pretreatment
There’s a fairly rigorous pretreatment process at IWA. A series of filters removes the larger particles and easily removed some smaller particles from the feed water. The cartridge filters for pretreatment consist of five vertical vessels containing a total of 332 one-micron filters. Each filter is 30 inches in length. These prefilters are replaced about once every four months, or when the differential pressure (DP) reaches 8 psi. (NOTE: They have since been destaged to accommodate the more efficient, low-pressure membranes available now). In addition, IWA uses an antiscalant that’s injected into the feed water stream at a rate of 3.0 ppm prior to the water entering the membrane module pretreatment regime. This significantly reduces scaling and biofouling of the membranes.

Testing RO technology
Around the time of the original commissioning, IWA began to pilot a new membrane, mysteriously referred to as “Brand X.” This was a thin-film composite membrane. Operating on the same feed as the full-scale plant, the superiority of the Brand X membrane was very obvious. In 1985 the calcium (Ca) elements in Trains A, B, and C were retrofitted with Brand X membranes that produced the same quantity of water with almost 40 percent less operating pressure (350 psi). The improved permeate quality from the RO trains was less than 100 ppm. Raw water, where the salt content is approximately 3,000 ppm TDS (of which half is chlorides), provided a major challenge when trying to reduce energy costs for the system without incurring higher maintenance expenses. The results are impressive for energy savings. Because of this, one of the seven pumps is now used as a spare.

The RO train
The membrane module elements that replaced the original ones were state-of-the-art, hand-rolled 8.5-inch diameter with 15 leaves, each of which is 52 inches in length. Periodically, new elements were tested in one of the membrane trains. In late 1997, IWA and the manufacturer cooperated to test a new generation of low energy, thin-film composite, RO elements that resulted in substantial savings. To get the full benefit of the lower feed pressure needed, the RO pump motors were refit with variable speed motors. In two of the six trains, membrane modules were used in the second stage.

The use of the different elements in each stage achieved the desired hydraulic balance, which was made quite challenging by the temperature being 27°C and 3,000 ppm TDS without using any permeate back pressure. The newest elements in just two trains coupled with the variable speed drive retrofit lowered the total electrical costs of the entire system by approximately 10 percent, a savings of $36,000 per year. This represented an annual return on the investment for the IWA of over 20 percent. In addition to the monetary return, the lower pressure operation is quieter along with less wear on the pumps.

More trains, better economics
Three more membrane trains have been added to the system since the original upgrades. The IWA plant now produces 4.2 million gallons per day (mgd)—or 15,900 cubic meters per day (m3/d)—of permeate and 4.7 mgd (17,800 m3/d) of finished water from the brackish groundwater source. Six RO trains contain 20 vessels per train. Each train is arranged in a 14×6 array, with 6 elements per pressure vessel.

Among the six trains, Trains E and F use the most advanced combination of membranes and operate at the lowest feed pressure. The 14 vessels in the first stage contain a state-of-the-art, low energy RO element with 400 square feet (ft2)—37 square meters (m2)—of active area. The six vessels in the second stage utilize a low-energy element with 440 ft2 (41 m2) of active area and very high productivity. The operating parameters from Train E that were recorded 21 months after startup with the new membranes are shown in Table 3. 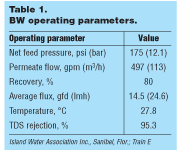 About the author
Harold Nicoll is the Liquid Separations Division marketing senior business communications manager for Dow Chemical Co. in Midland, Mich. He can be reached at (517) 636-9086, (517) 832-1465 (fax), email: hgnicoll@dow.com or website: http://www.dow.com/liquidseps.