A Journey from Cuba to Miami: Eagle Water Continues to Soar 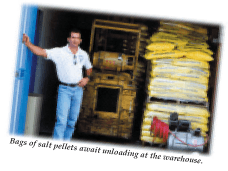 Once the company president answers the phone for himself, you know there’s something different about Eagle Water Corp. Epitomizing the no-frills approach, Eagle Water must be the Southwest Airlines of water treatment dealerships in the Miami area. In a major U.S. city where the likes of Culligan and Rainsoft are major competitors, José Paulin’s company doesn’t even have a store location per se. Instead, he boasts a warehouse with various types of equipment including a showroom. 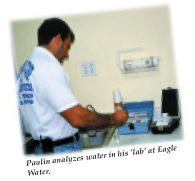 This may seem dull to some people, but they wouldn’t know José’s story. 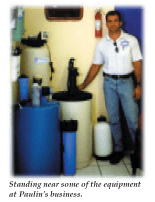 Land of the free
Looking for a better life with more opportunities, Paulin’s father gathered his wife, José, his sister and grandmother, and made the trek from Cuba to Miami in 1980 as part of the Mariel boat lift (see FYI). Did José have reservations about going to a strange land with a different language and culture? “For me, it was easy because I was 12 years old,” José says. “I went to school and I learned the language within a year or two. I always worked part time after school. For my parents, it was kind of hard. They didn’t speak any English. Plus, my father had to work a lot.”

In the beginning, the father supported his family by being a truck driver and later working at a popular restaurant. Then came the job that would serve as the breakthrough move in a career change—José’s father started selling water filters door to door. He did it for two years. He was attracted to the job because it came with flexible hours.

Eventually, he ventured on his own. In 1984, Eagle Water Corp. was born. José was never far from his father’s business, helping out frequently when he wasn’t in school. Fast forward to 1990 when José studied architecture and received his associate degree from Miami-Dade County Community College. After graduation, José took some marketing classes at Miami’s Florida International University. Around this time, he heard about the Water Quality Association (WQA) for the first time and enrolled in some certified water specialist (CWS) courses while working with his father full time. José is presently a CWS-III. His days at FIU were over and the passion for water treatment clearly transferred from father to son. The reins of the business were given to José last year. His 70-year-old father remains active as the company’s accountant/bookkeeper. 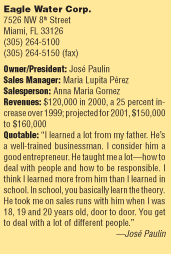 All places at one time
Knowing where he came from allows José to not think twice about answering all incoming calls to the business, performing all installations, repairing equipment and even making numerous door-to-door solicitations. Along with José, the company employs a full-time salesperson, Maria Lupita Pérez, and a part-time salesperson, Anna Maria Gomez. Pérez coordinates the sales department. José hopes Gomez will soon become a full-time employee. Come to think of it, sometimes José is the only one in the office to pick up the phone.

He learned his work ethic well from his father. When José visits customers’ homes, however, he prefers the incognito method of doing business.

“I don’t tell anyone that I’m the owner. If you tell someone you’re the owner, it makes you look more like a worker. I treat everybody nice. I sell a lot using that approach. I send letters to my customers every month to change their water filters. They give me a lot of referrals. Last month (January), I got eight sales from referrals,” José says. “Besides, when you go into a house and they know you’re the owner, they think you’re rich. Since I’m a young guy, I don’t look like I own the company. I’ve been seeing my customers for 10 years; they’ve seen me grow up.”

Wanted: good help
When asked why he hasn’t brought more people on at Eagle Water, José says finding the right fit is a tough proposition. “I’ve had better years (than 2000). I’m really slowed by a lack of sales reps because I’ve had a hard time finding one,” José says. With a 25 percent increase in revenues over 1999, Eagle Water made $120,000 and he expects that figure to be $150,000 or $160,000 this year. With four or five sales reps, annual revenues could easily reach $185,000, he admits. Eagle Water has done it before. Ever the optimist, José believes three more sales reps will be hired during 2001.

“Sales reps here (in Miami) are not professional,” José says matter-of-factly. “I interviewed one guy not too long ago and he didn’t want to work with a sales list price. They want to sell anything to anybody for any (amount of money), and I don’t go for that. I have a list price, and if a unit costs $500, you have to sell it for $500.” He has encountered some who have tried to increase the unit price in an attempt to accrue more commission—they no longer work for him.

Because of a small staff, José relegates his business area to the Dade and Broward counties, in particular for service calls. His advertising dollars are spent with the yellow pages in addition to relying on word-of-mouth. Eagle Water had a website for a year before the idea was nixed six months ago due to insufficient response. Still, José says the most effective advertising is door to door.

M.O. is mostly RO
Though he works in the commercial sector, primarily installing water softeners on cooling towers, José claims 85 percent of his business is residential. His mode of operation for treatment range from softeners, reverse osmosis (RO), carbon filters, iron filters, chlorinators, water distillers “and anything related to water treatment.” The most prominent are water softeners, carbon and RO, which make up 90 percent of the applications. 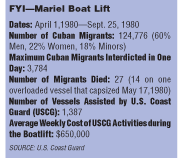 Also, 90 percent of Miami’s water is municipally supplied, and José says Eagle Water occasionally works on wells. Hardness of the water is about eight-grain and chlorine is added to it. José uses carbon and RO against chlorine. With high organic content of a tropical environment, ammonium and tannins are another problem associated with water in Miami. He says water can be found at 10 feet below ground, which can present more complicated obstacles for well owners because of the influence of contaminated surface water runoff.

For 20 years, José has seen shifts in how customers in the area react to potential water problems. “In the ’80s, it was the booming era for the carbon filter,” he says. “Now, people are learning to use water softeners. We (sell) eight to 10 units a month. People are becoming more aware of their water’s hardness.”

All of Eagle Water’s filters are under-counter as opposed to countertop varieties. Customers’ systems are two-stage with sediment and carbon. Each year, sediment cartridges are replaced. José receives eight to 10 calls a day regarding filter changes.

Language barrier
With the Cuban influence so strong in Miami, José says knowing two languages provides a distinct advantage for water treatment dealers. “Ninety-nine percent of my customers speak Spanish,” he says. “If you speak both languages, it helps especially with advertising.” José says he “hardly speaks any English,” but he handles a lengthy phone interview almost flawlessly.

With a customer base of 2,500, José sees service contracts as an increasing part of his business. He has dedicated himself to more service contracts and equipment rentals for this year. Hence, less emphasis has been placed on sales. In the last two years, José has tallied about 50 contracts and an additional 60 rental accounts. Revenues break down to 60 percent sales and 40 percent rentals.

José makes it a point to participate in the roundtable discussions at national WQA-sponsored events. José’s been a member since 1993; he’s not a member of Florida’s WQA. José would like to invite his father, but the older Paulin is not as comfortable speaking English.

Names of suppliers
Some of the manufacturers who furnish José with equipment are Autotrol, Fleck and Clack. All units come unassembled and he puts them together. Carbon filters come from Bestech. Elkay Manufacturing supplies water coolers. Chlorinators come from Pulsafeeder. “We try to give (customers) the best,” he says.

“We came into a country that we didn’t know, and we started a business which (my father) didn’t know. Selling was not a problem. Finding the right people to buy from was—the right contacts. I started going to these conventions and meeting the right people. The first four or five years were hard. After that, the business started growing.”

Industry in transition
José says Eagle Water has benefited indirectly from another transition within the industry. Some major water treatment companies “are selling franchises to a lot of people who don’t know what they’re doing,” he believes. “I see this business as a long-term investment. It’s not a high-income business. It’s a low, steady income.”

There is a downside, he admits. When water treatment businesses fail, the whole industry suffers the consequences. “I have a lot of people who bought units from people who went out of business. So when you walk into their house, they look at you like you’re going out of business, too.”

Conclusion
To say Eagle Water has come a long way in 20 years would be a major understatement. The same could be said for the Paulin family. Not only have they thrived in a new country, but they’ve steered a successful business through previously uncharted waters and landed on the welcome shores of prosperity.