Summary: With so many causes potentially affecting the performance and upkeep of wells, the most important factor is gathering correct information before formulating solutions. The following article presents several steps in ensuring that a well is properly treated, tested and maintains its value to the owner for years to come.

There are all kinds of problems experienced in pumps and wells. Pump problems can be mechanical, electrical or system related, causing a reduction in yield or total breakdown. Well problems are often associated with: 1) a reduction in yield, caused by plugging of the screen or an open borehole from iron bacteria, slime bacteria, mineral scale, sand or silt infiltration, or debris in the well (Yields can also be affected by other pumping wells, or physical changes in the aquifer, i.e., a drop in static level or seismic activity.); 2) odors; 3) discoloration, and 4) corrosion caused by either water chemistry, galvanic activity, stray currents (AC or DC) or some forms of bacteria.

Problems aren’t often discovered in municipal or industrial wells until they’re well beyond minor repairs. The pump breaks suction or quits pumping water due to a mechanical problem. There’s air in the water lines, reddish water and/or odors. This often sets up an emergency condition and presents major problems. Any time you have an emergency it costs extra money. There’s little time to really understand the problem and design a proper and effective solution. Here are some basic steps to plan well maintenance.

Well information
Good information is paramount. Too many times, little information is available about well dimensions, well depths, screen lengths, aquifers (thickness and type), pumping data (gallons per minute—gpm—at a certain pumping time and pump setting), past performance of the pump (it’s different than well performance), water chemistry or biological identification/quantification. Information like this often is difficult to find, so it’s important well and pump records are kept fastidiously and readily available where possible.

File records according to well number. Separate well and pump information. Organize maintenance information for each file in chronological order. Construct an “as built” drawing or ask the contractor for that information. It’s easier to understand. Put the well log and general pump information at the front page for easy reference.

Understanding problems
Pumping rate alone isn’t a measurement for determining well problems. A pump impeller may be loose, or there may be a hole in the pump column pipe (can be either vertical turbine or submersible), which will cause a decline in recorded yield. Neither have anything to do with the well. The key to separating well and pump problems is understanding if the yield of the well is declining, which is done by calculating “specific capacity” or SC (see Figure 1). 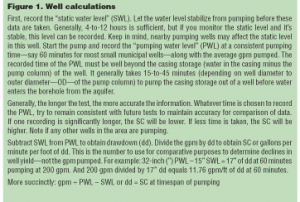 Analysis of specific capacity
If both the pump yield and ampere (amp) readings are lower than previous readings but the SC is higher, the pump may need repair. If the pump yield is lower, amp readings remain the same, and the SC is higher, there may be a hole in the column pipe. If the pumping rate, amp readings and SC are lower, the well may need rehabilitation. Compare this information at least once a year on municipal or industrial wells. Record SC on all new wells and set a target of 60 percent at 70 to 80 percent of the original SC for planned rehabilitation.

A decline in the specific capacity can be caused by: 1) mineral scale, 2) slime bacteria, 3) fine sand or silt infiltration into a screen area or borehole, 4) physical blockage in the borehole or well screen, and 5) physical changes in the aquifer itself, i.e., reduction in static level and even seismic activity. Determine if any sand is being pumped, which can often be found in pressure tanks, water lines or holding tanks. Always check the well depth. There may be several feet of fill in the well, which can reduce yields. Determine if there is any buildup of hard scale or slime on pumps or piping systems. Check any available water quality information.

The problem should be addressed if the SC declines more than 30-to-40 percent. It’s more difficult to remedy a plugging problem caused by mineral scale if the specific capacity has declined more than 40 percent. Plugging due to slime bacteria is easier to successfully rehabilitate regarding wells even if the specific capacity is zero, because the bacteria remain near the borehole. 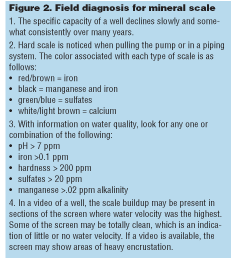 Temperature changes enhance mineral precipitation. Sulfate levels less than 70 parts per million (ppm) can precipitate when the velocity is extremely low, which happens when the pump is off. A layering effect of the various types of minerals can occur with sulfates on the surface and carbonates beneath. Sulfate levels greater than 70 ppm can precipitate in the same manner as carbonates. Different scales react differently with acids. Calcium is the easiest to dissolve, calcium in combination with iron and/or manganese is more difficult, and sulfate is the toughest. It may require several hours to dissolve sulfate, based upon scale thickness.

Slime bacteria
Slime problems in wells and systems are caused by naturally occurring, common soil bacteria found in every aquifer. These bacteria find nutrients within the aquifer and exist normally in numbers of tens to hundreds of colony forming units per milliliter (cfu/ml). Some bacteria are highly mobile and can be either aerobic or anaerobic. Aerobic bacteria exist in areas of high oxygen in a well. Anaerobic bacteria like areas of low oxygen, i.e., non-pumping wells, low permeable area of aquifers, sumps beneath screens in wells, or beneath large amounts of scale, slime or decayed debris. Bacteria that can exist in either aerobic or anaerobic conditions are called facultative.

Aquifers have a natural direction of flow. When a well is installed and pumped, the direction of flow and velocity change. The natural flow velocity within an aquifer is measured in feet per year or even inches per year, whereas the flow around a well during pumping is measured in feet per second. Changes in velocity and pressures also occur within the pump, in the drop pipe and through the distribution system. These are factors in slime production (see Figure 3). 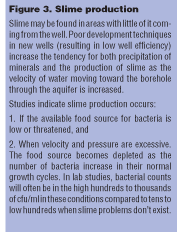 Slime formation is a natural protection against harmful chemicals like chlorine and acids. Studies show shock chlorination kills only some of the bacteria and smears the outer surface of a slime mass. Some bacteria can survive acid solutions with a pH of 2 for long periods. Any attempt to kill these bacteria with biocides, chlorine, hydrochloric, CO2, and hydroxyacetic acids is, at best, temporary.

Some families of iron bacteria produce a stalk that can be seen under a microscope. This becomes a framework slime bacteria attach to or fill in, which increases the severity of plugging. Iron bacteria attach to areas of high nutrients, i.e., steel casing, pumps and decayed debris from other bacteria. They secrete a corrosive enzyme to process nutrients, and corrosion is often found on metal surfaces. When identified, it’s an indication of massive amounts of scale or biological debris. The most common bacteria of this type are Gallionella, Crenothrix and Leptothrix. Iron bacteria can become a problem within weeks in a new well. 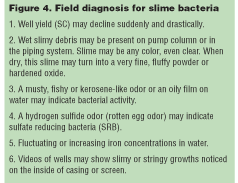 Odors
Many odors in groundwater are related to bacterial activity. The “rotten egg” odor is can be caused by sulfate reducing bacteria (SRB), which is naturally occurring in aquifers. Some SRBs are anaerobic in nature, meaning they thrive in an environment without oxygen, and some are facultative. In a natural aquifer, areas of low oxygen may include low permeable lenses of silty sands, shales and clays. An area within a well that has a low oxygen environment may include a sump below the screen where there’s little water movement. This same environment can be created by not pumping a well for long periods of time, which allows oxygen in water to dissipate.

Older wells can suddenly develop odors and physical changes in the well should be suspected. These same anaerobic bacteria can find a low oxygen environment under slime and mineral scale as well. Often when wells are chlorinated, an odor suddenly appears simply because the oxidation process of high pH chlorine. This removes the outer layer of scale or slime and exposes these bacteria. Chlorination or shock chlorination won’t remove these bacteria in the case of a new or old well. Water treatment is the only answer on both a new well, and a more thorough cleaning of an older well may be required.

Musty, fishy and oily odors can be caused by several families of iron bacteria. Odor problems or complaints of discoloration in water lines don’t necessarily mean the problem originates in a well. Organic or inorganic (mineral precipitate) debris can accumulate in a piping system independent of the well. This debris can be a nutrient source for bacteria. Bacterial testing (lab services or bottle testing) can be done to identify and quantify these bacteria.

Conclusion
The severity of a problem and frequency of treatment is generally determined by the water quality, nutrients available for bacterial growth, and usage or over-usage of a well. Original development and well efficiency also play a role. If a well isn’t properly developed originally, water velocity increases during pumping because of blockage due to drilling muds or damage (compaction, smearing of clay lenses or redistribution of silts) from the drilling process. When you pump an inefficient well and turn the pump off, the pumping level will jump several feet the first minute of recovery trying to equalize to the pressure outside the well. Many think it’s a sign of a great well when the pumping level rebounds very quickly but, in fact, it’s a sign of an inefficient well.

The key remains information and monitoring of that information to determine trends. Determine the problem before designing solutions. Then plan well maintenance, which leads to lower costs and happier customers.

About the author
David Hanson is the owner of Design Water Technologies in Shorewood, Minn. Its products are available through 93 distributors throughout the United States and Canada. The company also provides free technical assistance, field and lab services to municipalities, engineers and contractors. Hanson can be reached at (888) 437-6426 or (952) 474-4657, (952) 470-6637 (fax), email: designh2o@aol.com or http://www.designwater.com.