Building Steam for the Revision of ANSI/NSF 62

By Jane Wilson and Lorna Badman

With an eye toward increasing utilization of ANSI/NSF Standard 62—Drinking Water Distillation Systems, the NSF International Standards Department has been working closely with the Water Quality Association (WQA) Distillation Task Force to propose technical revisions to this standard. NSF staff attended three meetings of the Distillation Task Force in the last year, and it was anticipated finishing touches to the proposed standard would be completed at the March 2001 meeting of the task force during the WQA Annual Convention & Exhibition in Orlando, Fla. Following completion of the draft document, the revised standard was to be forwarded to the NSF Joint Committee on Drinking Water Treatment Units (DWTU) for review and balloting.

DWTU standards have traditionally contained three types of requirements—material safety, design and construction/structural integrity requirements, and verification of performance claims. The proposed revisions will update these parameters for the evaluation of distillation systems. In addition to technical revisions, the standard is being editorially updated to agree with the American National Standards Institute (ANSI) recommended format for American National Standards.

Material safety
The material safety requirements for Standard 62 are being updated to coincide with the requirements in other DWTU standards. This includes incorporation of the same exposure protocol currently used for materials testing of other treatment technologies. The current Standard 62 protocol specifies use of a single 72-hour exposure, after which extractant water is collected and analyzed. The draft standard will update requirements to use the three composited 24-hour exposure protocols specified in other DWTU standards. The three composited 24-hour exposures provide for an averaging of contaminant extraction over the total 72-hour exposure period.

Design requirements
Many revisions are being proposed to the design and construction requirements. A primary technical issue being addressed by the Distillation Task Force is defining meaningful requirements for distillation system performance indication. The task force used recent revisions to Standard 53—Drinking Water Treatment Units-Health Effects as a guide for the proposed requirements for chemical reduction performance indication. To address systems making microbial reduction claims, the task force identified potential device failure modes, such as carryover of contaminants from the boiling chamber and tipping of the system. The task force then determined design requirements or tests that will address each potential failure mode.

Many of the current design and construction requirements, such as specifications for joints and seams, fastening methods, covers and mounting provisions, are proposed for deletion from the standard. These are product design elements not addressed in other DWTU standards. For distillers that may be used in commercial food preparation applications, these provisions can be evaluated under ANSI/NSF Standard 2—Food Equipment, if required.

The in-place-cleaning specifications for evaporator chambers and condensing coils have been expanded to include a verification test for in-place sanitization of the product water zone (surfaces that would normally come into contact with the treated drinking water). The manufacturer’s recommended sanitization procedure will be performed to verify it provides adequate sanitization of these surfaces. The proposed test procedure is based on in-place cleaning procedures used in NSF Food Equipment Standards.

For structural integrity specifications, the current standard requires only components of the distiller subject to line pressure be designed and constructed to maintain a working pressure of 689 kilopascals (kPa)—or 100 pounds per square inch guage (psig)—with no associated testing specifications. The revised standard proposes the addition of the same structural integrity test procedures as used in other DWTU standards—hydrostatic, cyclic and burst pressure tests. These test protocols were recently reviewed and updated for the other DWTU standards, and those updates have also been incorporated into the structural integrity testing proposed for Standard 62.

Performance claims
Revision of the inorganic contaminant reduction requirements includes addition of an option for manufacturers to test at a higher total dissolved solids (TDS) challenge concentration than the 1,000 milligrams per liter (mg/L) challenge currently specified. This will allow units designed for the treatment of brackish or high TDS water to have their full reduction capability verified against the standard. The system will be required to reduce the manufacturer’s specified challenge by a minimum of 95 percent. The system must also reduce the 1,000 mg/L challenge by 99 percent, as currently required.

The temperature range specified for the inorganic contaminant challenge or influent water has also been amended to the 20 ± 2.5°C (68 ± 5°F) range used in the other DWTU standards. A water specification for silica content of £ 20 mg/L was also added at the suggestion of the task force. The pH specification for the TDS challenge water was deleted since TDS reduction performance isn’t thought to be pH-dependent. 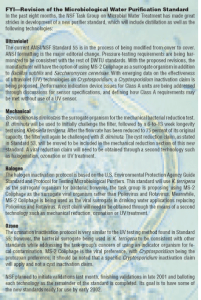 Future revisions
Additional technical revisions have been discussed that will be long-term projects. The microbial contaminant reduction portion of Standard 62 will eventually be transferred to the family of standards being developed by NSF to address performance of various treatment technologies used to reduce or inactivate microbial contaminants in drinking water. The material safety requirements may also be revised at a future date depending on the outcome of the current NSF effort to harmonize DWTU material safety requirements with Standard 61—Drinking Water System Components-Health Effects.

The distillation industry is also interested in establishing contaminant reduction claims for volatile organic chemicals (VOCs) in addition to inorganic contaminants now addressed by the standard. The industry is in the process of identifying certain VOCs to be the highest priority in terms of contaminant reduction claims for distillation systems. If feasible, a surrogate chemical study may be performed in order to identify a volatile chemical whose reduction would serve as an indicator for the system reduction performance of various other organic compounds. A similar approach has been used for VOC reduction in Standard 53 and Standard 58—Reverse Osmosis Drinking Water Treatment Systems.

Conclusion
Through the cooperative effort with the WQA Distillation Task Force, NSF has made great progress in defining technical revisions to ANSI/NSF Standard 62. If the draft revision process is completed in March, it expects adoption of the revised standard to be completed by late 2001. NSF hopes to offer the distillation industry an improved standard that will provide consumers with even greater confidence in the performance of these systems.

About the authors
Jane Wilson is the senior project manager for “Water and Environmental Standards” in the NSF International Standards Department. She has been with NSF since 1990. Her bachelor’s degree in medical technology and master of public health (MPH) degree in toxicology are both from the University of Michigan. NSF is located in Ann Arbor, Mich. Wilson can be reached at (734) 827-6825, (734) 827-6831 (fax) or email: http://mwilson@nsf.org.